Addressing a crowd in New Hampshire, First lady Michelle Obama gets emotional talking about Trump’s 2005 lewd comments that were caught on tape:

No, she just wants to talk about an 11-year old video of Trump using locker room banter. Granted, what Trump said about women (over a decade ago) is certainly repugnant. But what Hillary Clinton DID is much worse than what cheesy things Trump has said.

Besides, most Americans are more “shaken to the core” by the critical issues we are facing today, including: skyrocketing health insurance premiums, Iran building nuclear weapons, Russia flexing its muscles, our $20 trillion dollar national debt, the threat of international and domestic terrorism, and a porous southern border that’s wide open to nefarious characters.

By the way, Michelle O and her husband have invited a few guests to the White House who she probably should have been shaken to the core about, including rapper Rick Ross in April 2016. The tip-off that maybe he shouldn’t have been there was when his ankle bracelet went off…According to Breitbart, Ross had recently “been indicted for assaulting and kidnapping two workers he caught throwing a party at his 235-acre Fayetteville, Georgia home.” And in 2013, “the rapper lost a valuable footwear endorsement after he boasted in a song of spiking a woman’s drink.  The April 15 White House event, ironically, “was meant to help encourage young people to stay out of the criminal justice system.” 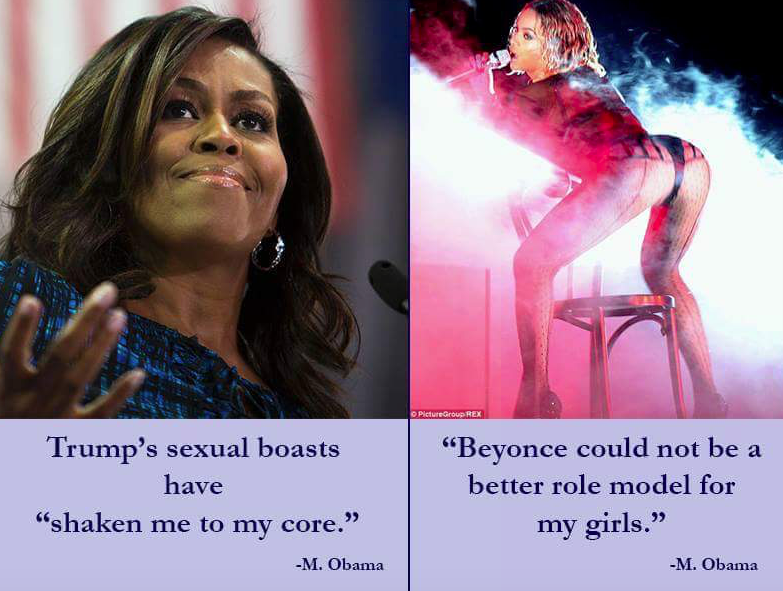 Michelle also should have been ‘shaken to the core’ last year when her husband invited Muslim Brotherhood leader, and worldwide Sharia supporter, Azhar Azeez, into their temporary home.

Or in 2011, maybe Michelle should have been “shaken to the core” when she and Barack invited rapper “Common” to the White House.  Common famously rapped about killing cops.

Perhaps if Donald Trump had been bragging about killing cops, or if he had actually kidnapped someone, or roofied someone’s drink, or wanted to enact law that makes women 2nd class citizens, stones them to death and murders gay people, he wouldn’t have terrified Michelle…