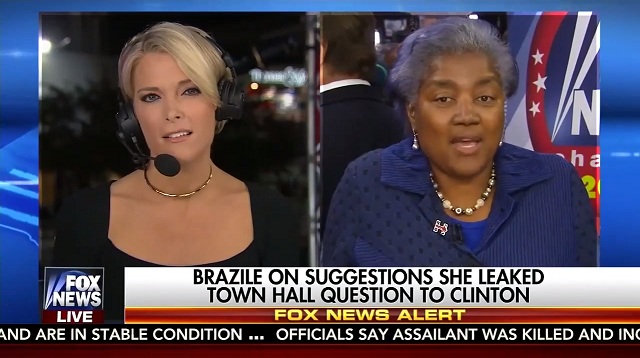 In case you missed it, Real Clear Politics has released a video of an explosive interview between Fox News’ Megyn Kelly and DNC chair Donna Brazile.  The interview took place after the final debate between Clinton and Trump and as you can see, it was a “smackdown” by Kelly.

Kelly put on her prosecutor hat and questioned Brazile about the WikiLeaks emails that showed damning evidence that the DNC was working hand in hand with CNN before a Clinton townhall debate, and that CNN provided Brazile with questions that would be asked.  It is absolutely indisputable that the email was from Brazile stating that “from time to time I get the questions in advance”.

The fiery back and forth pushed Brazile into a corner and she could only do the same old Democrat dance;  deny, deny, deny.  Blame it on someone else and smear the messenger.

The Democrats and the Clinton campaign have been caught in unbelievable manipulation and collusion, not only with the mainstream media but with organizations that deal in illegal and fraudulent voting and violence at campaign rallies.

The light is shining brightly on the deep, dark secrets of this corrupt party and its minions and the evidence is spilling out like a volcano erupting.  Thank you, Julian Assange for bringing us the truth.

Oklahoma Teacher Tells Students: "To Be White Is To Be Racist.”