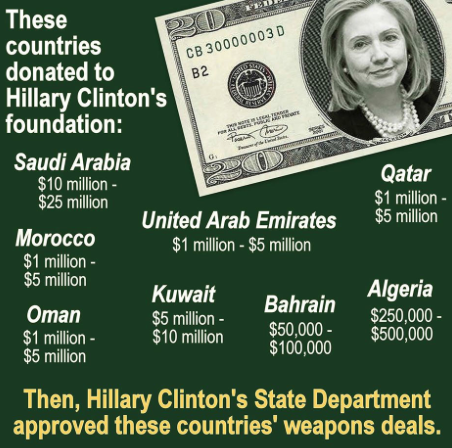 A recent Bret Baier Special Report featured an Ed Henry story about Hillary Clinton and her direct connection to a $12 million “ask” by the Clinton Foundation to Moroccan royalty.  A former Clinton advisor, Lanny Davis, explained to viewers that they should not take Huma Abedin’s email about the multimillion HRC speaker fee so literally and then goes on to remind Americans about all of the “good” deeds the Clinton Foundation does for others.

Except, herein lies the problem and the criminality. Hillary Clinton laundering speaker fees and other contributions through her family foundation as the sitting U.S. Secretary of State (PAY TO PLAY) is ILLEGAL no matter how much money flows to charities or even does some good.

During the course of the 2016 election, we keep hearing about PAY TO PLAY and I have to believe many Americans must just not get it or they don’t want to get it. The PAY TO PLAY activities the Clinton’s have been involved in and covered up so well through “mysteriously deleted email” are about enriching themselves and are still unequivocally illegal.

Anyone who works in politics at the vortex of policy, power and money knows this to be true.

PAY TO PLAY is not about what is in the best interest of all Americans or even about the fact that the Clinton Foundation does donate to good and even great causes, it’s about being incented to do something (good or bad) only if there is money being exchanged that benefits the person and/or entity in question.

Take it from someone who knows: Jack Abramoff. As one of the most renowned, former D.C. lobbyists to go to prison for similar PAY TO PLAY crimes, Abramoff tells it like it is from firsthand experience, “She’s [HRC] been involved in activities that frankly I was put in prison for and that I was in prison with other people who did other things that she did,” he explained. To read the entire Daily Caller interview with Abramoff and listen to his full remarks, click here.

End of day, it’s not about whether Clinton Foundation has donated to good causes. It’s about the billions of dollars collected in the name of charitable causes for favors promised by HRC — which again is criminal. It’s also about the difficult decision voters will need to make now through November 8th if they truly want to rid America of the corrupt political elite across both parties who seemingly are more about enriching themselves than lifting all Americans.