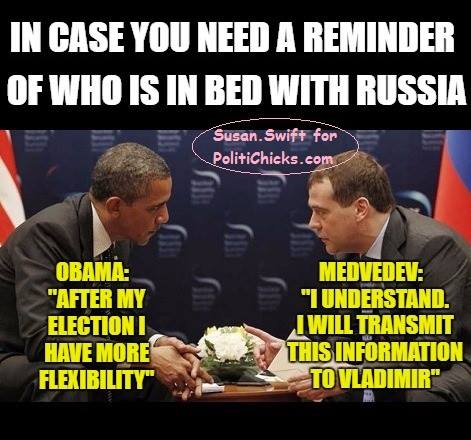 Hillary Clinton created a false flag narrative at the final presidential debate and the media is busy spreading it around.  Desperate to smear her political opponent, she wants you to believe that Donald Trump is colluding with Russia to steal the U.S. elections.  In fact, it is Hillary Clinton and the Democrat Party who are colluding to ensure Hillary’s presidential victory at any cost.

At the third presidential debate in Las Vegas, Nevada, Hillary Clinton said Vladimir Putin was responsible for the damaging series of leaked emails, suggesting that

Russians “have hacked American websites, American accounts of private people, of institutions, then they have given that information to WikiLeaks for the purpose of putting it on the internet. This has come from the highest levels of the Russian government, clearly from Putin himself, in an effort, as 17 of our intelligence agencies have confirmed, to influence our election. So I actually think the most important question of this evening, Chris, is finally will Donald Trump admit and condemn that the Russians are doing this?”

Just in case you need a reminder of who’s in bed with the Russians, recall Obama’s Moment of “Flexibility”.

In March of 2012 while at a global nuclear security summit in South Korea, President Obama Obama was overheard asking for time – “particularly with missile defense” – urging Moscow to give him ” ‘space‘ until after the November ballot” while reassuring then Russian President Dmitry Medvedev that he would win a second term:  “This is my last election. After my election I have more flexibility,” Obama said.  Medvedev responded, “I understand.  I will transmit this information to Vladimir [Putin.]“   Obama and Medvedev were caught on a hot mic, unaware that their conversation was audible.

Moreover it was Hillary, then acting Secretary of State Clinton, who approved a deal which allowed Russia to control twenty percent of U.S. uranium production.

So Obama promises “flexibility” in arms deals in 2012.  Then Hillary gifts Russia with lucrative control of a strategic U.S. asset, and profits handsomely in speaking fees.  Call it Pay-to-Play or quid-pro-quo but don’t blame Donald Trump.

Since Obama and Hillary have been such helpful allies to Russian missile defense and nuclear programs, why in the world would Putin actively seek to throw the election towards Trump now?  What would Putin’s political motive be to aide Trump against Hillary?

Hillary Projects Her Own Corruption Onto Trump

The media are in league pushing this Trump/Russia false flag narrative to deflect attention from the true source of corruption in the race: Hillary Clinton, the DNC and the media.

The DNC and Campaign Hillary rigged the Democrat Primary, disenfranchising millions of Bernie Sanders supporters.  DNC Chairwoman Debbie Wasserman-Schultz stepped down in disgrace after Wikileaks and other hacktavists released thousands of DNC/Clinton emails:

The release provides further evidence the DNC broke its own charter violations by favoring Clinton as the Democratic presidential nominee, long before any votes were cast.

Thanks to brave conservative video activist James O’Keefe, we know who is truly conspiring to steal the election.  Wikileaks continues to confirm what Project Veritas undercover videos illustrate:  It is Hillary Clinton and the Democrat Party who are determined to ensure Hillary’s election at any cost.