There seems to be no end to the slew of revelations about Hillary Clinton showing her to be corrupt, untrustworthy, and frankly, just plain hateful of anything that isn’t quite “progressive” enough for her anti-Christian bigotry by her campaign We all know about her malfeasance in the Benghazi incident, which caused Americans to 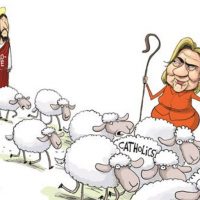 die. In her private e-mail server, this may well have resulted in sensitive United States secrets falling into foreign hands. We know she is a liar and hypocrite, fully admitting when speaking to her wealthy friends that she needs to have a “private” position and a “public” position on key issues. And now, thanks to information dumps from Wikileaks, we know how she and her supporters feel about one of the most venerable religions on the planet.

This is the implicit goal of progressive policies like President Obama’s U.S. Department of Health and Human Services (HHS) that issued a mandate under the Affordable Care Act (“Obamacare”) and the Equality Act  that requires employer health plans to provide free contraceptives, sterilizations and abortion-inducing drugs, regardless of any moral or religious objections. By planting the seeds of their revolution within the Catholic Church, particularly during the time when Catholic bishops are expressing their opposition. Given these radical, anti-religious positions, it’s not a shock to find out that Clinton’s top staffers hold bigoted, anti-Christian views and religious beliefs they wished to be changed and conform to the Left’s radical agenda.

Hillary’s running mate Tim Kaine has made his Catholic faith an integral part of this campaign. Pay no attention to the person behind the curtain! What does he have to say now that the curtain has been pulled back and the blatant anti-Catholicism of his ticket is revealed?

In recently revealed e-mails, we see a conversation between Clinton campaign chairman (and known close personal confidante) John Podesta and a left wing activist about the Catholic Church; specifically, what Podesta and his friend feel its future should be (like it’s for them to decide). In the e-mails, Sandy Newman, the president and founder of a liberal nonprofit outfit called Voices for Progress, writes: “There needs to be a Catholic Spring, in which Catholic themselves demand the end of a middle ages dictatorship and the beginning of a little democracy and respect for gender equality in the Catholic Church.”

It’s a wonder, of course, why Mr. Newman feels the need to comment on the future of Catholicism, as he himself does not happen to be Catholic. Regardless, when confronted with the e-mail, he admitted he didn’t know much about the Church and wouldn’t be actively campaigning for his idea, even if it, quote, “isn’t crazy.”

For his part, John Podesta wanted to be sure Newman realizes that Podesta and his friends are hard at work on the issue, having gone so far as to create organization designed to seep into the Catholic Church and spread progressive values within it. He writes: “We created Catholics in Alliance for the Common Good to organize for a moment like this. But I think it lacks he leadership to do so now. Likewise Catholics United. Like most spring movements, I think this one will have to be bottom up.”

E-mails such as this show the regard with which Hillary Clinton’s campaign regards Christianity in general and Catholicism in particular. Clinton herself has called Catholic beliefs “backward” and said that Catholics are “ignorant” of Christian democracy, so we certainly know how she feels personally.

What business, frankly, is it of Clinton (who is not Catholic) to speak of the inner workings of the Catholic Church? She may find this shocking to hear, but Catholics believe that their religion and their Church were organized by and answer to the authority of God. In Catholic theology, it is He who is the author of the Church, and He who directs its structure and actions. The Pope, along with all other high ranking Catholic officials, is seated by and answer to God. Catholics are quite happy with this arrangement, thank you Mrs. Clinton, and they do not need your input or that of your friends to “improve” upon it.

And forgive the phrase, but Lord knows that the progressive feminist Clinton won’t say a word about fundamentalist Islam, in which women are held in virtual slavery to the will of men. Even though that religious belief has become the foundation for entire nations in which government authority is used to subvert women’s rights – whether they personally embrace the faith or not. The double standard here is nothing short of sickening. She has made her disdain for religious liberty and faith-based voters clear, and promises an administration that would only perpetuate the attacks on conscience rights

We are fighting a message of evil.