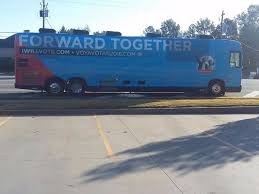 “A store employee told police that he watched an RV affiliated with the Democratic National Committee stop in the turn lane of Grayson Highway in front of the store.

The employee says he watched someone get out of the RV and open the sewage drain. Raw sewage then spilled onto the roadway and into the storm drain.

“They pulled the bus up right here. They stopped right here at this storm drain,” said Mike Robins.

Robins snapped several photos of the bus that he shared with Channel 2 Action News.

Gwinnett County firefighters had the not-so-pleasant task of cleaning up Democrat waste including toilet paper and foul-smelling material.

As of Tuesday evening, no action is being taken against the driver. Authorities say it’s too early to tell what potential fines or penalties might be considered.

The Critical Issue Nobody Is Talking About In This Election