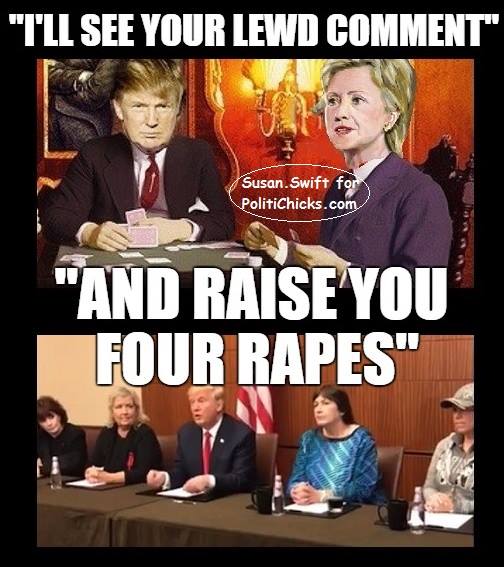 With 30 days to go until Election Day, Trump owned the night.  And Americans got to hear the issues.  Trump’s solid debate performance just shifted the entire race and rocked Hillary’s world. Prediction: 3rd debate will break every Nielsen rating in history. For better or worse, people want spectacle. They’re getting it.

The clothes said it all: Trump Power Suit and traditional red tie versus Hillary’s Penguin Suit over a confusing unisex shirt.

Act I Hillary prevailed; Act II Trump came back strong; Act III will be the final scene in the national Presidential Debate Drama reality show.  And Election Night will be the finale.  Overall, the media must be supremely happy with itself.  I’d bet that viewers for the second debate actually went higher than for the first because of the media’s Friday sound bite trick.   Now the media has ensured viewership for the final debate will go through the roof.  So everybody wins (except maybe American culture).

With respect to media’s opening bid in the debate poker game, the Donald was true to his name. He trumped the media by bringing Bill’s accusers to a pre-debate show, catching the media totally off guard and doing himself a world of good standing by the victims of Hillary’s husband.

Trump was remarkably disciplined and kept his ramblings restrained. Midway through he was using his microphone to fire zingers at the moderators, too, and seemed to control the entire stage as he quietly prowled around Hillary like a lion sizing up a nervous wildebeest.  He hammered her as the 30 years veteran insider incapable (or unwilling) to change the elite tax code that benefits the govt and elite friends. Also landed solid body blows concerning cutting business taxes.

Trump’s best point of the night was his promise to invoke a special prosecutor to investigate Hillary’s 33,000 deleted emails.  It reinforced the notion that Hillary is acting above the law as the ultimate insider and Trump as an outsider determined to make America fair again.  The simple point of making laws apply to everyone regardless of station also bolsters Trump’s immigration stand and his policy on ISIS.  It may have won him the election, frankly. It certainly put this race back in to the “unknown” category.

Hillary started off strong but was soon on the ropes, caught off guard by Trump’s preparation and command of facts (don’t get me wrong, Trump was no Ted Cruz by any stretch) and his unique ability to mock and dig at her with respect to emails.  She inadvertently (?) gave Trump a huge endorsement, affirmatively telling all of America that Trump wants to put conservatives on the Supreme Court to roll back Roe V Wade, reverse gay marriage and Citizens United and that she will appoint liberal judges to undo the conservative leaning court over the last 30 years.

By the end of the debate, Hillary was shrill, looked a bit fatigued and was completely on the defense howling about her record and pointing to her days working with Latinos to register voters.

At the conclusion of the debate, the station I was watching immediately went back to the Trump sound bite. They ignored the totality of what Trump said and what Hillary said.  If you hadn’t watched it live, you wouldn’t know that anything changed. Media just missed it….again.