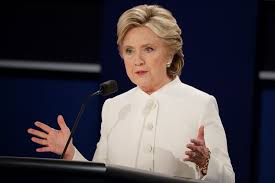 In the debate on Wednesday night, Democratic nominee Hillary Clinton denied misplacing $6 billion while serving in the State Department. However, the Inspector General reports prove otherwise.

According to the Washington Times:

“The State Department misplaced and lost some $6 billion due to the improper filing of contracts during the past six years, mainly during the tenure of former Secretary of State Hillary Clinton, according to a newly released Inspector General report.

The $6 billion in unaccounted funds poses a “significant financial risk and demonstrates a lack of internal control over the Department’s contract actions,” according to the report.

The alert, originally sent on March 20 and just released this week, warns that the missing contracting funds “could expose the department to substantial financial losses.”

The report centered on State Department contracts worth “more than $6 billion in which contract files were incomplete or could not be located at all,” according to the alert.

“The failure to maintain contract files adequately creates significant financial risk and demonstrates a lack of internal control over the Department’s contract actions,” the alert states.

The situation “creates conditions conducive to fraud, as corrupt individuals may attempt to conceal evidence of illicit behavior by omitting key documents from the contract file,” the report concluded.”

To read more, go to the Washington Times

In an Insane World Does a Bully Become an Antihero?