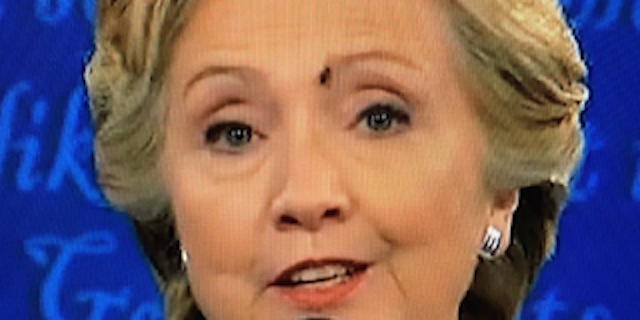 “Let me just start out by saying that so much of what he just said is not right,” Hillary began.

And then while 63 million people watched, a member of Musca domestica, or the common housefly, landed and perched near her eye.

Trump had just wrapped up a thorough takedown of the Clintons and their abuse of women. “There’s never been anybody in the history politics in this nation that’s been so abusive to women,” he said. The camera cut to a stone-faced Bill Clinton sitting unmoving in the VIP box.

“Hillary Clinton attacked those same women and attacked them viciously. Four of them here tonight. One of the women, who is a wonderful woman, at 12 years old, was raped at 12. Her client she represented got him off, and she’s seen laughing on two separate occasions, laughing at the girl who was raped. Kathy Shelton, that young woman is here with us tonight,” he said.

Kathy Shelton had been beaten and raped into a coma by Hillary’s client. On tape, Hillary could be heard laughing as she recalled how she had gotten her rapist off while accusing Kathy of making it all up.

“I think she should be ashamed of herself,” Trump concluded. The audience applauded. ABC’s Martha Raddatz, Hillary’s venomous proxy among the debate moderators, sourly told the audience to shut up.

With her patented false chuckle, Hillary launched into her rebuttal as the fly perched on her.

The media, which can take a story about Hillary laughing about the rape of a 12-year-old girl (Vox: She did it for the Constitution) or leaving Americans to die at the hands of her Muslim terrorists in Benghazi and then lying about (The New York Times: It was a spontaneous protest) jumped into action.

CBS dug deep into its vault of stupid and declared that the fly was really a Native American totem “delivering a unique message” to help her “steady her emotions” after Trump’s attack. The “Tiffany Network” based this on a source which claims to have “life-long abilities” connecting with people, through “telepathy, energy awareness, clairvoyance and clairsentience”.

“Was it nature’s way of delivering a message to the Democratic nominee?” CBS asked.

In the bleary eyes of the press, even the fly landing on Hillary was the universe’s way of helping her against Trump. One might even say that the fly was an honorary member of the mainstream media trying to convey messages of reassurances from the media’s posh dungheap.

A quote from a less New Age source that went viral on social media however came from the Talmud; “The evil spirit is like a fly that lies at the door of the human heart.” Rav, the Talmudic scholar, used Ecclesiastes 10:1 as his source, “Dead flies make the ointment of the perfumer fetid and putrid”.

King Solomon went on to write, “Dead flies make the ointment of the perfumer fetid and putrid; so doth a little folly outweigh wisdom and honor. A wise man’s understanding is at his right hand; but a fool’s understanding at his left.” Underneath Hillary’s favorite perfume (“Angel” by Thierry Mugle) is the smell of putrefaction that attracts flies. Her understanding is that of the left and the left is an evil foolishness.

The 15th century Spanish Jewish scholar, Rabbi Arama, wrote in the Akeidas Yitzchak, that, “He who prefers the rewards that originate from the left side is foolish” because they provide only “transient values”. Transient values are mortal. Unlike wisdom and honor, they perish swiftly.

The folly of the Clintons has outweighed any wisdom and honor they might have had. They have gained enormous wealth and prestige, yet even their own supporters despise their rottenness.

The only creature attracted to them is the fly.

The fly is a carrion symbol. It is drawn to dead and dying things. Even in the Native American legends that CBS desperately tried to invoke to turn the fly into a positive symbol it is the creature that brought death into the world. Putrefaction is what the Clintons brought to America. The fly is their perfect symbol. They are greedy creatures of rot, surrounded by filth and wallowing in their own vileness.

Hillary Clinton has presided over massive theft, corruption and the complete collapse of our foreign policy. From her modest days of turning $1,000 in cattle futures back in Arkansas into $100,000 with a little help from some key influential friends, she moved up to delivering six figure speeches to anyone willing to invest in Clinton futures in Washington D.C.

The Clintons raked in $153 million in speaking fees alone. Is there anyone who has sat through a Hillary speech this election season and thought that it was worth 50 cents, let alone the $280,000 paid by Germany’s Deutsche Bank, the $335,000 paid by the Biotechnology Industry Organization or the $325,000 paid by the National Automobile Dealers Association?

Those weren’t speaking fees. They were illegal campaign contributions.

And then there’s the Clinton Foundation, a gargantuan organization where the revenues run to $149 million a year, and whose real mission was to function as a slush fund for the Clinton campaign. As a charity, the Clinton Foundation was incredibly useless. It spent a small percentage of its loot on anything resembling charity. Much of the money went to employing key Clinton people like Huma Abedin.

Even when the Clinton Foundation tried to perform its good deed for the year, it cut corners on charity to keep up its core mission of getting Hillary into the White House. It shipped AIDS medicines that had been banned in the United States to the Third World. Haitians protested outside Hillary’s office over the millions that had been raised for Haiti, but got funneled to Hillary pals like Warren Buffett instead.

As Secretary of State, she presided over the complete collapse of national power and influence. When she took office, America was taken seriously around the world. When she left office, we were a joke.

Russia and China had succeeded in smacking around our allies and expanding their territory. They escalated their hacking campaigns into cyberwarfare attacks that stole our most vital secrets. Islamic terrorists took control of much of the Middle East. They murdered one of our ambassadors and attacked our embassies and missions. And the Clintons kept on getting richer from their dirty deals.

While the People’s Republic of China pushed aggressively into the South China Sea and launched cyberwarfare attacks against us, Bill Clinton took home $200,000 from its organs, including the Chinese Ministry of Information Industry. The Ministry is believed to have played a role in PRC hacking attacks.

Before the Russian invasion of Ukraine, the Clintons and their shell Foundation had pocketed $145 million from them. Bill Clinton was paid $500K for a speech by a bank linked to the FSB, the secret organization formerly known as the KGB. It was quite a Moscow comeback for Bill from his original trip there that had also been conducted under the auspices of individuals and groups linked to the KGB.

The Clintons are attracted to corruption the way that flies are drawn to offal. The media can spot no flies on Hillary. Its fact checkers excuse every scandal. They even invent a positive spin for a fly landing on her. The ordinary fly visiting Hillary may hold no special meaning. But flies are notoriously attracted to rotting things. And no political figures in this country are as rotten to the core as the Clintons.

The media may not be able to scent the rot of the Clintons, but a humble housefly can.