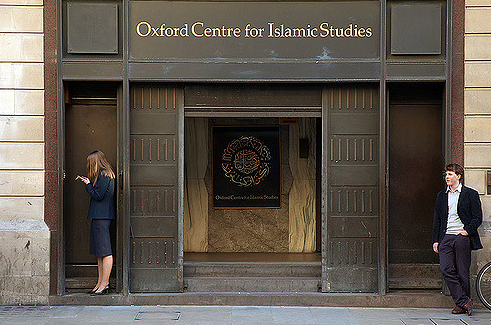 I’m a graduate of one such program myself–[I did my doctorate in Near East Studies (classical Arabic and Persian languages; dissertation on the history of Mecca and early Islam) at the Near East Department at a major university]–and I’m dismayed when I see the proliferation of such programs in our universities and colleges. They add more to the darkness than they do to the light.

The reason is almost as simple as it is largely ignored. It’s the same reason Islam gets away with being the single greatest source of murder, terror, torture, oppression, mutilation, slavery, and destruction the world has ever seen, over the entire 1400 years of its existence–and still gets a free pass and an open door from the pinnacle of freedom-and-tolerance-loving, liberal, advanced civilizations, the 21st century West.

The matter hinges on the protective cover of the word “religion”. Maybe I should say, “deceptive cover”. It was a stroke of genius. And so easy, the wonder is that more power-and-wealth-hungry would-be world conquerers haven’t thought to use this trick.

Here’s how it was done:

When Muhammad began his preaching (around the year 610 AD), he didn’t need to come up with material out of thin air. Much of the contents of the Qur’an ‘revealed’ to him while he was at Mecca, which was during his first 12 years as a prophet, are borrowings straight out of the Bible, especially the Old Testament. He took all the important names: Abraham (rendered into Arabic as Ibrahim), Moses (Musa), Joseph (Yusuf), Ishmael (Ismail) etc. He took many of the customs, such as the weekly Sabbath day, the Holy Book or written Scripture, foreswearing of idolatry, and the concept of monotheism, from the Christians and Jews who at that time constituted a large proportion of the population of Arabia. He took stories from the Bible, in fractured form, in some places replacing Jewish characters with Arab ones (e.g., Abraham’s near-sacrifice of Isaac, near Jerusalem, in the Qur’an becomes a near-sacrifice of Ismail, near Mecca). He lifted whole verses of the Psalms, translated into Arabic, verbatim–some even keeping their original Hebrew vocabulary.

By borrowing the name of Abraham and co-opting the story of his history with Isaac, Muhammad gave Islam its astounding designation as “one of the world’s 3 great Abrahamic faiths”. And the most useful part of that, as it turns out, is its designation as a ‘faith’.

He could not have anticipated the doors this term would open for his followers more than a thousand years later, throughout the modern western world. In 7th century Arabia, after Muhammad fled Mecca for Medina in 622 (which ‘flight’ or ’emigration’–“hijrah”–is the official starting moment of Islam), the nature of his ‘revelations’ changed from fractured liftings from the Bible to administrative rules and justifications for his own totalitarian authority and the waging of war.

The Qur’an revealed in Medina presented a world divided into ‘us’ and ‘them’–‘us’ being Muslims, those who ‘submitted’ (literal meaning of Muslim) to Allah and therefore, to Muhammad; and ‘them’ being infidels–everyone who does not submit–who are to be subjugated, converted by the sword, raped, tortured, enslaved, or killed.

Once arrived at Medina, Muhammad began gathering armies of mainly illiterate Bedouin from the deserts of Arabia, and demanding their absolute loyalty to him; to kill and die for him and obey his commands without hesitation or question. The faith he invoked was a strong recruitment tool, with its promise that in killing “for Allah” you are pleasing the supreme being and bringing glory to his name and eternal reward to yourself.

This promise, added to Muhammad’s skills as a warlord and the earthly booty promised to fighters who survived (not only plundered loot, but captive women and children as sex slaves–all taken with the blessings of Allah) meant that a soldier joining his side couldn’t lose. Survive and you get plunder and captives to rape and enslave; die and you go to the highest rung of Paradise, with unimaginable luxury (spelled out in detail) plus an eternity of carnal satisfaction with 72 ever-renewing virgins of either sex and any age, shape, appearance that you want.

There was a strong disincentive to resisting recruitment, too: refuse to join Muhammad’s army–or opt to leave it–and you’ll suffer a gruesome death.

Within Muhammad’s lifetime the whole of Arabia was conquered.

So why are western scholars so confused?

If you look at the Qur’an, you’ll find verses revealed at Mecca (bits and pieces from Judeo/Christian lore and from the Bible); and verses from Medina (a manual for totalitarian control, subjugation, warfare, and world conquest). These are intermingled, as the Qur’an is not printed in chronological order but rather in order of longest-to-shortest chapters.

If all its verses are analyzed and quantified, however, you’ll find that the vast majority of the Qur’an’s contents (and even more of its companion books, the Hadith and the Sira, which clarify any ambiguities found in the Qur’an) are about totalitarian control and war.

And then, you’ll find something even more startling: the Bible-lifted, religion-sounding verses from the Meccan period have been replaced and cancelled–abrogated–by the intolerant, murderous ones from the Medinan period. This is explained in the Qur’an itself, which reports that Allah revealed to Muhammad that wherever two verses contradict each other, the later one abrogates the former. All the violent, Medinan verses came after the more peaceful ones, which were from Mecca.

So, if we look at Islam as a whole, what we find is essentially a totalitarian political system for war, subjugation of all others, and world conquest…disguised in a thin veneer of vaguely religious-sounding ornamentation. It must be said, that even the ‘do this for Allah’ verses are–quite unlike what we usually call ‘religion’–demands for blind obedience to Muhammad and justification for all manner of cruelty done with the aim of spreading Islam.

If I were to characterize Islam with one image, it would be of a huge, ferocious war elephant with bloodied tusks. This war elephant is covered, however, in a beautiful thin blanket richly embroidered.

The Islamic Studies programs, without exception in my experience, spend all their time and attention focused on the embroidery on that blanket.

U.K. Authorities Escalate Persecution for Standing Up to Sharia