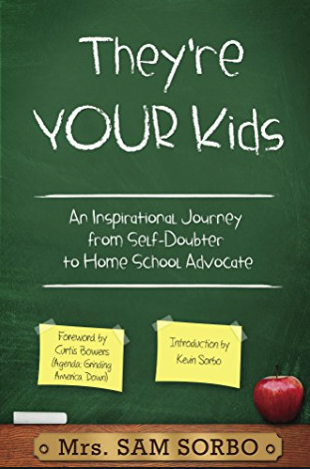 I know I may be accused of betraying my profession.

I am in the process of finishing an amazing book, one of the best books on education that I have read in years, They’re Your Kids-An Inspirational Journey from Self-Doubter to Home School Advocate by Mrs. Sam Sorbo. I have to say as good I found the book to be, I read it sadly as Mrs. Sorbo documented what I knew and had seen already. Our schools are on the decline and it began in the sixties.

I was a classroom teacher and an administrator for four decades and loved every minute of it. My wife and I were also loyal to the National Education Association and we were life members. I held offices on a local and state level and my wife and I took part in state and national education conventions for years. I was adamantly opposed to home schooling and a voucher system. However the education system we supported for so many years is not the same as the one that exists today. The association we loved had one major goal, to improve education for every child. Legislation we backed at the time was only what would benefit students, not provide for our own personal financial welfare. When I decided to dedicate my life to teaching I knew I would not make a great deal of money and that like favorite teachers of mine I might even have to hold jobs in the Summer to make up for two months without a salary. Somehow we survived very well, raised two children and believe we had a good standard of living.

All of that has changed. In my opinion part of this was due to having to compete with the American Federation of Teachers, a union that believed that political activity and a show of force was necessary to get high salaries and protect jobs. The Education Associations in our larger cities were losing membership and some of the methods of the union, such as striking, seemed to be the way to achieve a better life. When I was president of a local education association I was approached by the AFT as they wanted Virginia education leaders to consider consolidation. This was so foreign to
what I believed that I gave them a quick refusal. This was exactly fifty years ago.

However, a bigger element in the change was the Federal Government increasing its role in what according to the United States Constitution belongs to the states. I saw this in the sixties when the very conservative school system I was in felt that it could not compete with other school systems unless it was willing to accept Federal funds for LBJ’s War On Poverty.

I myself was guilty as I accepted the job outside of my teaching to run a Summer Head Start program. While the program did gain some results, it was dropped after three Summers when Virginia started a Kindergarten Program. During that time I felt like Big Brother was watching me and the reports I had to make were time consuming. From time to time the Office of Economic Opportunity would phone and a favorite question was how many Black Teachers we had in the program and how many Black children were enrolled. This was a tough question for me as I never thought of teachers or kids in terms of black and white and they were often irritated by me having to check as the figures were supposed to be uppermost on my mind.

There were soon other Federal programs, much too good for school systems to turn down. Many of those programs required standards to be placed on various subjects taught if money was to be released to the school system. A big turning point came under President Jimmy Carter who wanted to be endorsed by the NEA when he ran for re-election against Ronald Reagan. That was the creation of the Department of Education. We should have known what was coming when Hillary Clinton came out with her book It Takes A Village. Clinton’s philosophy is that the driving influence in education should be the state, the role of parents is secondary. If that sounds familiar, think Socialism, think Communism, think Nazism. And now as a candidate for President Hillary Clinton has promised to reinforce that idea, one already being enforced in two many school systems, the Common Core Curriculum.

Every parent who cares and every teacher who cares should become familiar with Common Core. It sounds nice to talk about standards, however we are talking about standards that are Federally based with a testing program designed to require teachers to teach to the test. Mrs. Sorbo reports that forty five states adopted the plan before they knew what was in it because of the money guaranteed them if they accepted the program. And it is a program that does not allow for differences in school systems and in children. It is a plan designed to erase individuality and the idea of competing for excellence. Her book gives many illustrations taken directly from school systems, some of which are frightening.

For a former government and history teacher like myself I am alarmed at how the patriots who built our nation are demeaned as a bunch of white wealthy guys who endorsed slavery. The constitution itself is misquoted and the agenda is clearly anti America. Socialism is taught as good, capitalism bad, morality is a matter of opinion and God is completely out of the equation. The Islamic faith in some schools is actually a part of the curriculum and Christianity is not.

It is no wonder that home schooling has become more popular and thanks to computer technology parents do not have to have a college education to do the job. While drop out rates in public schools soar, home schooled children are breaking records and turning out to be well adjusted, well educated and good citizens. Good citizens in accordance to what made our nation great, not according to the bureaucrats in Washington.

I have no regrets about the years I served as a teacher and take great pleasure in keeping in contact with a great many of the young people I had the honor of working with. Many of them are as horrified as I am about what is happening to what to us and once was the most important profession a man or woman could be engaged in.

Why Does Obama Hate Israel?