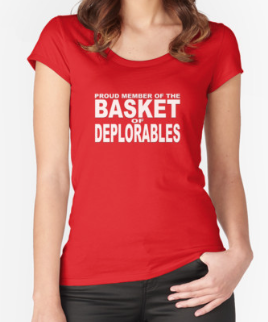 I’m a Canadian and a political news junkie. I admire the US and the American people tremendously. I see America as the greatest nation that has ever existed and I draw inspiration from her achievements and accomplishments. Whatever happens to the shining city on a hill, affects us all.

Since the US elections are always far more interesting than our Canadian elections, I’ve been riveted since day one of the primaries. I’ve got to be honest and say it’s because The Donald was running. This man, with all of his foibles and rough edges was by far the most charismatic and fascinating of all the contenders for the office of US President. Not only is he a successful business man but his Patriotism is contagious and palpable. Something that Americans and those of us who believe in America as the cornerstone of Western civilization, have been thirsting for for years.

I wasn’t that surprised when he won the Republican nomination. Although those of us who supported him were being smeared in the media, I was rooting for him. I was applauding his tough, no nonsense style and his no apologies love for America.

I must say my mother and father feel the same way I do, even though our Canadian media denigrates Trump at every opportunity. It was plain that the United States and the West needed a strong leader like him who would fight in our corner for our values and our civilization.

By paying close attention since Barak Obama was elected, I could see that the American people were becoming fed up with his failed and feckless policies both in foreign affairs, particularly in the Middle East and domestically. After years of promises from a Republican Congress, that they would thwart Obama policies that worked against the best interests of the American people and seeing nothing done, the electorate felt betrayed and disenchanted by their own elected officials.

This opened the door for someone like Trump, a political outsider. A man who could not be bought, who would fight the Regressive Leftist media, the globalists and the political elites on behalf of the American people. They finally had a voice.

D is for the #Deplorable #Downfall of Clinton

I’ve been watching Hillary Clinton for many years as well. I paid special attention when she allowed four Americans, including an American Ambassador to be murdered by Global Islamic Jihadists in Benghazi, Libya on September 11, 2012 and then lied and blamed a video for it when she knew all along it was a planned attack.

I was actually in the Middle East at the time, in Israel, when this was happening. We were shocked and horrified. Even how she allowed Ghadafi to be lynched in the streets by his own people. She later laughed about it and stated: “We came, we saw, he died.” Who says something like that?

Ghadafi was no where near perfect but he was a strong leader and had become an ally. He was the kind of leader they need in that region to keep all the factions and tribes from creating utter chaos like we see now. Strength is what works in the Middle East. We could go on about her and Obama’s failed policies in the Middle East that have set the entire region on fire and created the migrant crisis that now threatens the West with Jihadists and Sharia Law.

I took great exception to her calling my American Patriotic friends A Basket of Deplorables consisting of racists, bigots, Islamophobes, even though this isn’t even a word and yes, we need to worry about the Global Jihad both stealth and otherwise. She spewed these insults with such vitriol and anger that frankly it was shocking. After watching the video I thought she might have been under the influence of drugs or alcohol. This vicious verbal assault coming from this lying, morally bankrupt woman was offensive to me in the extreme.

It is interesting that immediately after calling her fellow Americans vile names in public no less, she collapsed and on 9/11, the anniversary of the day she let those men die in Libya.

I don’t wish Mrs. Clinton ill, however, I can only pray we will Triumph and that Trump will win this election and not this woman who called millions of her fellow Americans deplorable. A woman who is owned by the same people who perpetuated 9/11 and who wish to usurp the American Constitution with Sharia Law.

How Captain Kirk Celebrated the Constitution on Star Trek