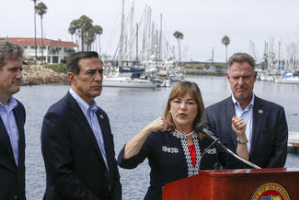 Republican Rep. Darrell Issa is supporting his colleague Rep. Loretta Sanchez in this fall’s Senate race, a contest that pits two Democrats against each other and gives GOP voters no obvious choice.

The two appeared together in Issa’s congressional district this week, giving Sanchez an opportunity to publicize her expertise on national defense in a part of the state where she needs to do well with Democrats, Republicans and independents alike if she hopes to overtake her rival, Atty. Gen. Kamala Harris.

For Issa, the bipartisan event may help soften his image as congressional Republican leadership’s attack dog on the Obama administration.

He said that despite their differences on most issues facing the nation, he respects Sanchez’s knowledge of military and world affairs and they both support efforts to keep the country safe.