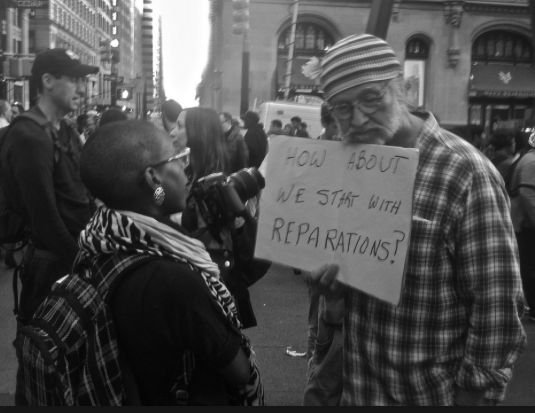 Last week, Georgetown University’s President, John DeGioia, announced atonement efforts to include an affirmative action policy for descendants of the 272 slaves who were owned by Maryland Jesuits, then sold in 1838 to pay down the school’s debt.

According to a 104 page report published by an assigned “Working Group” of the university, the sale netted the university $115,000, which would amount to about $3.3 million in today’s currency.

The NYTimes.com reported that in addition to giving preferential treatment in admissions to the slave’s descendents, the atonement effort would include:

“a formal apology, create an institute for the study of slavery and erect a public memorial to the slaves whose labor benefited the institution, including those who were sold in 1838 to help keep the university afloat.

The Washington Post reports that in less than a week after the announcement the descendants made a counter proposal for a $1 billion foundation to “promote reconciliation after the horrors of slavery, asking to create a charitable foundation . . . and to do more good”.

The Reparation debate has been swelling, pointing to the government and institutions to confront “the legacy of slavery” for decades.

Slavery was a world-wide disgrace. A world-wide era of mankind’s inhumanity to mankind. While the progressives educate our youth that it was America’s original sin, the whole world was mad with the practice of enslavement.

It’s the exact same moral blindness the nations have today regarding the abortion issue.

The progressives, however, keep the slavery era and its injustice alive to keep the African Americans beholden to them in a never ending co-dependency for privilege or preference while the Left maintains its voting bloc. Those African Americans are unaware that they live in the psychological plantation created by the Left.

White guilt is conjured in the classrooms for the same reason. And it’s groundless. No white American today owned slaves. And no African Americans alive today were slaves.

I labored, painfully, trying to understand the arguments listed in a publication posted in the Stanford Encyclopedia of Philosophy titled Black Reparation. The conjecture, the assumptions, and the suppositions were so convoluted that personal time limitation restricted me from working toward an even minor rebuttal to parts of it. Yet the arguments, though irrational, apparently prevail at universities such as Stanford and Georgetown.

Robinson believes, “When governments commit crimes against segments of their own population,” he says, “those governments have a continuing responsibility to address this and to provide restitution.”

Walter Williams, an economics professor at George Mason University, differed with Robinsons. Williams opposes reparations. He points out that black Americans are only here because of slavery.

“Almost every black American’s income is higher as a result of being born in the United States than any country in Africa,” says Williams, an African-American himself. “Most black Americans are middle-class.”

The estimated reparations may carry a price tag to be as much as $10 trillion. Our nation presently teeters on an economic cliff with a national debt soaring close to $20 trillion.

But reparations advocates say their goal in eliciting more money is to put it into more programs of education, training and economic development.

Williams noted that investments have already been made. “The American people have spent $6.1 trillion in the name of fighting poverty,” he says. “We’ve had all kinds of programs trying to address the problems of discrimination. America has gone a long way.”

The black population is about 14% of the nation. We have a black president. We have black DOJ. The nation is blessed with black entertainers and musicians. We’re blessed with black athletes. Black college professors. And the list goes on evidenced in every field of endeavor proving opportunities are available for the African American community just as it is for all Americans.

We’ve thrown money into school programs, education, and training programs from our tax dollars to make right the wrongs as best we could since the 1960’s. Many whites had fewer opportunities in order for affirmative action to be carried out. It was worth the sacrifice for the nation.

The war on poverty has failed because no one can force a person to learn, to work, to take advantage of opportunities, to acquire drive or change how they think. People have to do want to do that on their own.

Our nation’s youth today are not taught to take personal responsibility for their choices and actions. They are not taught how to learn and earn or to think critically. The progressives dominate the education system. It is not in their best interest to teach success systems. Such systems are incompatible with indoctrination of victimhood and entitlement. So they are taught that their ancestors past injustices are the reason their lives are not working. They are taught to live in the past and to blame whitey.

I was raised Catholic, but I am protestant now. I’ve read over 18 different Bibles to one extent or another, including the Catholic Bible which includes the Apocrypha.

All versions have the following verse, while many say it differently; I think the amplified says it best.

For those who are Christians, forgiveness is not optional.

The reparations have been paid. It’s time to break away from the present day plantation owners and embrace true freedom, putting our eyes on Christ’s will.

13 Brothers and sisters, I do not consider myself yet to have taken hold of it. But one thing I do: Forgetting what is behind and straining toward what is ahead, 14 I press on toward the goal to win the prize for which God has called me heavenward in Christ Jesus.

Michael Ingmire's Year of Focus: The Benghazi Attack and the 2016 Election