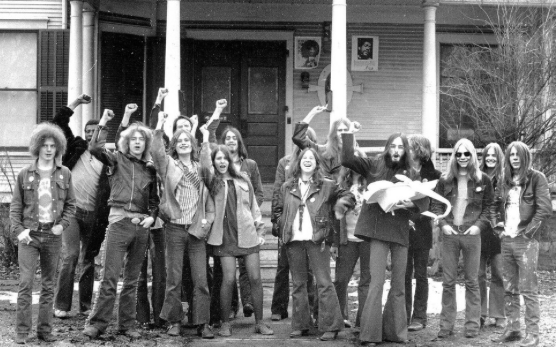 I adore fall but with the cool crisp air, crunchy leaves, and football chatter comes the school flu. And I am not referring to the little kiddie’s school flu complete with pink medicine and cartoons but instead to the college influenza, which is way more serious than any Asian bird or Florida mosquito can muster up. The detrimental detail about the college flu is that like herpes, it will last forever but unlike herpes, there is no pharmaceutical to keep it at bay. It is worse than a sexually transmitted disease because although it is not easily contracted, if you get it bad enough it will not only last forever but you will make everyone else around you nauseated when you open your mouth to speak. If infected with a heavy strain of the college flu it will follow you around for life making an idiot out of you each step of the way.

Students obtaining a normal degree like nursing and accounting are not subjected to this nasty germ at such a high level and fare much better in their freshman year. It is the Political Science department at the University level is an animal all unto itself.

Yes, parents, your poli-sci students are at great risk.

The good news about the college flu is there is only an extremely small percentage of the population that is susceptible to this skewed type of virus, and that would be college freshmen. If you can get through the first year of classes without contracting it you are, for the most part, home free. Juniors, seniors, and Grad school students are all but immune to the college flu, even though 98% of the Professors have the flu and are the exact ones that purposely try and infect the students on a daily basis.

Yes, unfortunately every August a fresh batch of brain matter is exposed to the liberal leaning of University life and leaves conservative parents across this country scratching their heads in dismay when their young adults return home for Thanksgiving break. The symptoms are alarming as successful high school graduates come home and say stupid things like never before. Stupidity is the main symptom to watch out for in your freshman along with a few others: whining like a two year old, complaints about global warming, quoting Senator Bernie Sanders and of course if they blame anything on Bush and Cheney.

Mothers and fathers feel great dismay if their child has been infected with the University influenza, otherwise known as “Liberalism”, because it is will be obnoxiously noticeably right away. When the topic of politics reaches the family holiday table (as it inevitably does), beloved college students will startle their parents with a liberal onslaught of their newfound knowledge. You will hear how Republicans are war mongers and want to repress female reproductive freedom.  You will also be told that Republicans love guns more than innocent school children, and other such nonsense. The college flu rhetoric is enough to make the healthiest amongst us ill.

The reason these young college students are so vulnerable is that no matter how sensible and conservative an upbringing, 18 year olds are still children. The time honored protection against voting as a Democrat is becoming an adult. And although the law states that 18 is the legal adult age, this does not address the reality of adulthood.  For most people it takes many more years than 18 to fully grow up, and if a slick talking Bleeding Heart Professor gets to them at a weak moment, the flu can set in.

Young men and women develop into adults with time, and along with that comes opportunity.   Opportunity brings choice, which offers experience, wisdom, and maturity. A person becomes adult not by the stroke of midnight on the eve of their eighteenth birthday, but instead when they learn self-responsibility with employment, income, and fiscal accountability. Let some of these liberal millennials living in their folks basements start paying income tax as they labor at a 40-60 hours work week and see how long they vote for a Democrat, after seeing their raped paycheck stub.

Freshman students that have grown up in a Liberal household have the antibodies against the college flu because they have been listening to hogwash their entire lives.  Unfortunately they tend to have a disastrous time when they graduate because at this point they enter the real world and have a stark epiphany. They breeze through their University stint without so much as a sniffle and straight A’s, but land right on their face when they realize their parent’s belief system is invalid, unsustainable, childish at best, and corrupt and dangerous at worse.   (See Hillary Clinton and her husband for clear and concise examples of my words.)

Still, the time-honored tradition is that before kids can support themselves properly outside of the nest, we send them to college. As parents, we never want to see our children in danger so we try to protect them–from the car seat to the seat belt to sending them off into the wild blue yonder of a college campus brimming with educated fools. All we can do is our very best and then hold our breath until Thanksgiving and hope hard that what you have taught them will hold them over and protect them from the college flu.

In my own family, we watched in horror as one of our nephews went off to college and his professors got him ill. He was so sick under their advisement of bleeding heart politics that he voted for President Obama once.  (Yes, I have just divulged the deep dark family dirt but not to worry; his upbringing held him through. He graduated and once he got away from the toxic university air, he made a full recovery. All is well that ends well.)

As for me, I kept dropping out of college in my youth. Now I understand why and it gives me quite the chuckle. In high school I was bored to tears, so later thought I was simply not disciplined enough to sit still in college. As it turns out I was allergic to the college flu and did not know it. With many years of maturity, a well-used library card, a non-stop streaming education via none other than Rush Limbaugh and EIB network, C-SPAN, and of course the internet, I was finally ready to stomach a higher education.

Upon graduating with a degree in Political Science in December 2010, not only did I completely avoid the college influenza but I made sure to spread the antidote on all my professors (not that it would help them). Unfortunately once you live with this affliction for too long you have it forever. Again, like herpes. But it sure was fun to wear my extensive array of political t-shirts and to add my conservative two cents to the communicative class atmosphere.

In closing, I will share a fond memory of my time carousing the University’s PC halls.   I was enrolled in a Political Parties class and the Professor was lecturing us on the ills of Republicans. As an adult woman, it was indeed nauseating to have paid thousands of dollars to listen to that man spew nonsense.  It was also frustrating to know he was teaching the wrong way, keeping in mind the sentiments of President Reagan that Liberals are not stupid, they are just wrong. Anyhow, he was going on at sickening length about the single mother and subsidiaries when my hand shot up in the air. As he called on me, I was thinking to myself ‘he might want to sit down for this…’ I asked, “Firstly I would like to know why this single mother is single, and next I need to add that Vice President Dan Quayle was right.”

Trump on the Rebound – What a Difference a Month Makes