On September 11, 2001, life in the United States was permanently and fundamentally changed. That, it is hardly necessary remind anyone, was the day when terrorists now known to have been working with al Qaeda and Osama bin Laden were able to hijack airplanes that they used to destroy the World Trade Center and severely damage the Pentagon. Another plane, meant for a similar suicide attack on the Capitol, was brought down in an open field by the heroism and self-sacrifice of its passengers. It was fifteen years ago and the nation have moved on from the worst of the trauma, but the scars of 9/11 will always remain.

Mercifully, some good did come of that horrible, evil day. In that aftermath of the attacks, Americans came together 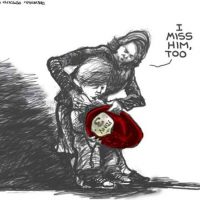 in a way and to a degree not seen since World War II. Patriotism rose to an all-time high – it became “cool” to display an American flag outside your home. And perhaps most lasting and importantly of all, Americans became aware for the first time in a generation that “national security” isn’t a political buzzword: its life and death, and dangerous threats to American safety are real.

One of the realities of which Americans have taken notice since 9/11 is a demographic one. The fact is the population of the United States used to be overwhelmingly white, with roots in Europe and religious beliefs that leaned heavily Christian. Things have changed, however, in a direction that favors diversity of all sorts – ethnic, cultural, and religious. Which, by itself, is fine: most people who come to this country do it the best of intentions, not matter from where they may originate. But it is simply a truth that some parts of the world are more dangerous than others, and after a disaster like 9/11, Americans are realizing that it is important to know who is here, and why.

This has had some unfortunate consequences. Frankly, the Islamic extremists who do things like crash airplanes into buildings (the worst they’ve done to us, though not by far their only crime) make Muslims look merciless. It’s easy to give in to the mistaken notion that all or even most practitioners of Islam – a religion with nearly a billion and a half followers around the world – are violent. And unfortunately, the attacks of 9/11 succeeded in their goal of terror: Americans were frightened, then, and many still are now. As a result, a lot of American Muslims now say it is harder to be a Muslim in the United States, which it really shouldn’t matter what your religion is.

However, it has to be said that many Americans also report drawing closer to their spiritual identities since the terrorist acts of fifteen years ago. They seek comfort and guidance from God in an uncertain time, and this is a good thing. While it is perhaps to be lamented that we at times seem to need horrible tragedies to befall us before we will concern ourselves with the needs of our souls, it’s an undeniably positive development that we are there, however we came to that point.

There remain – and will likely always remain – some people in this country who refuse to acknowledge the danger we currently face. But by and large, 9/11 taught Americans not to take their safety for granted, to be concerned with national security, and to keep a watchful eye on whom we allow to enter our country and why – while still retaining the spirit of tolerance and welcoming that made our nation great. Those, without question, are good things that have happened in the last fifteen years, even if they came from an act of unspeakable evil.

Daniel Greenfield: Obama's Crime Against the Victims of ISIS

The Epic True Story of the 9/11 Boatlift