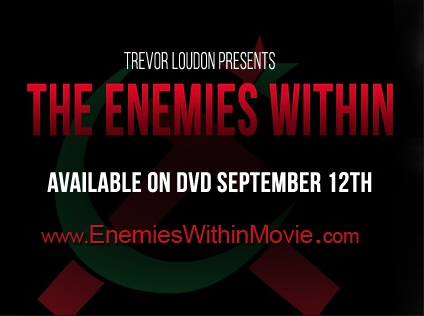 (Washington, D.C.) Author, researcher and commentator Trevor Loudon’s political documentary Enemies Within will be released on September 12, 2016. Loudon came to America from his native New Zealand to warn Americans about the dangers of radical elements of communism and Islam that affect the policy of the United States.

Former Homeland Security Intelligence officer for Customs and Border Protection, Philip Haney, who is recognized by the National Targeting Center for finding 300 terrorists; recognized for research of individuals, organizations and mosques associated with the San Bernardino and Orlando shootings stated… “I was under investigation by three different government agencies. They determined I was more of a threat than these terrorists groups. I was infuriated and stripped naked of my work. It wasn’t a moral infraction…It wasn’t a crime committed…There are emphatically enemies within our government. Hillary Clinton couldn’t pass a background check.”

Loudon poignantly asks “Could Hillary Clinton pass a FBI security check?” Enemies Within is designed to warn American voters about how neo-communism and its Jihadist allies work to undermine the United States national security from within. Loudon’s research exposes why crucial decisions made in the highest seats of the federal government often prove disastrous for America and her allies.

Those who serve on America’s most influential and sensitive congressional committees, for example, are not required to undergo the most basic of security clearances. While the American public strongly supports our troops overseas protecting the United States from foreign enemies, the U.S. Constitution warns us to guard against enemies both foreign and domestic.