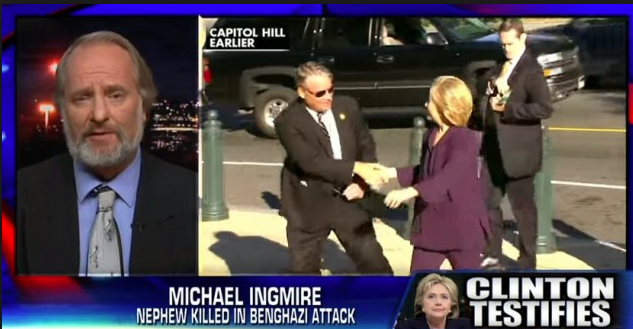 “I got dreams, dreams to remember”-Otis Redding

Yes, I have dreams, talents, and aspirations that I work hard on everyday to fulfill. However, at this juncture, I hope that I am remembered for my efforts to help establish an atmosphere of credible accountability regarding the deaths of my nephew Sean Smith, Ambassador Chris Stevens, Glen Doherty and Tyrone Woods. They were murdered in the September 11/12th, 2012 attack in Benghazi, Libya.

But current history is a flexible and facile beast. Given to the whims of the truth or the illusions of the moment. I have my own perceptions concerning real accountability. There is a lack of justice in this world. I do wish and hope for accountability in the next. To paraphrase the parable in Matthew 25:31-46 while on this earth I am just trying to inform the sheep, not entertain the goats.

Considering the diminishment of the education system, I wonder if the history books will correctly identify the culprits and criminals behind the Benghazi attack. Since September 2013, I have written extensively on the subject of the September 2012 attack in Benghazi, Libya.

I continue to learn new facts. I continue to comprehend and understand the full face of evil and how far one may go to cover the truth to further their power. That one may blatantly lie to win a some-to-be former President’s election and continue to lie to attempt to win a current election.

I continue to call our sitting, when not golfing, President and a former Secretary of State, war criminals, gun runners, and liars. Soulless wonders, who know no shame and embrace no honor. In retrospect, the past 12 months have been an eventful and amazing year in the discovery of new information about the Benghazi attack. But confirmation of the truth provides me with no joy, only a minor satisfaction of suspicions confirmed. I want some accountability. The Obama Administration can barely spell accountability, much less practice it. Here are a few of the more important moments of the past year concerning the Benghazi attack:

Navigating Washington since Sean’s death has been an exhausting and frustrating process. Hundreds of phone calls to Congressional and Senatorial offices, thousands of hours of research, e-mails, articles written, interviews given. But when faced with the death of a relative due to governmental criminality, there is no other choice. At least, if you have a soul.

But walking the halls of Congress can be a spooky proposition when dealing with representatives that look and act dazed. Of course, except when they are figuring out ways to become rich via “public service.” They are a Congress that could count themselves as extras in the Walking Dead.

I remember walking the Halls of Congress in September 2014. This was the day after the first House Select Committee on Benghazi hearing. A stanza from an epic work by one of my favorite poets came to mind:

“I think we are in rats alley. Where the dead men lost their bones.”
-T.S. Elliot, “The Wasteland”

With only a few exceptions, Washington D.C. has become a rats alley of greed, avarice, carpet baggers, criminal weasels and insider traders. Hucksters in the nightmare carnival that has become our political discourse and the process of government. Washington has demonstrated no bones and little courage when dealing with the current outlaw administration.

So where does the subject of Benghazi lie within the upcoming debates and campaign leading up to November 2016?

First, we need to get our country back. We have an exceptional opportunity with the upcoming election. 88% of Congress is up for re-election. Someone not doing their job and acting like a thief trying to avoid a Calvary cross? Vote them out. Especially, if they enriched themselves with back room deals on the backs of the American people. Put them in jail when crimes are committed. Demand a Special Prosecutor when necessary. Get involved in your government and don’t suffer fools at face value.

Stop trolling blogs and read some books. Do your homework. That has been the lesson of Benghazi for me.

There is an ambivalence among a portion of the American public that I cannot fathom. When faced with the bad behavior of a politician they merely say “Well what do you expect? They are a politician.”

I will make it clear, there is no possibility that America can survive Hillary Rodham Clinton as our 45th President. Everything we hold dear will be up for sale. Our liberties will be diminished and taken away. Electing Hillary Clinton leaves us even less safe than we are now. Open borders? Imagine metaphoric welcome signs at both ends of the country letting in terrorists and folks that do not respect us or follow our laws. A general decay will continue to prevail in this country until we resemble a rat’s alley.

The Supreme Court? The focus and process of the court will change over to a judicial social club under a Hillary Clinton administration. To a large degree, it already has. But it is not too late to stand up to the madmen and women of government and bring the Supreme Court back to a rational focus.

Donald Trump is the only choice for our 45th President in 2016. He will preserve our Constitutional rights and protect this country. He knows how to make money and America needs an enriched business structure. We need something other then the failed Social Service system currently disguised as government.

We need to eliminate or control terrorism in this lifetime. Mr. Trump states he wants to start with the elimination of ISIS. Recently, Hillary Clinton stated that ISIS is “rooting for Donald Trump.” Don’t make me laugh. The sons of ISIS will always worship their true Islamic mother and that is you Hillary. The last person ISIS wants to see as President is Donald Trump.

Mr. Trump has stated he will hold those responsible for Benghazi accountable. In my reality, the revelations of the past year about Benghazi and the other sordid scandals plaguing the Obama administration should have already placed President Obama and members of his administration, especially Hillary, in jail. In addition, why have none of the Benghazi terrorists, save one, been arrested? More empty promises from President Obama.

I believe Mr. Trump is serious about finding that justice for the family members of the Benghazi victims. I will support his efforts to do so. But to paraphrase Jamaican singer-songwriter Jimmy Cliff, there are “Many rivers to cross.” There is a lot of distance to travel to find some real truth and accountability within one’s self and to face the injustices of this existence.

To institute real change, it is up to you and me. It is our responsibility and our obligation. Donald Trump has been accused of being “politically incorrect.”

Mr. Trump has stated, in so many words, that America does not have the time to be politically correct. I agree. Continued political correctness may soon be the death of America. These are dangerous times. A failure to address evil is a failure of the human soul.

It is time for the U.S. Government to become responsible. To behave like a successful corporation that follows some ethical standards and that answers to it’s Board of Directors: The American people.