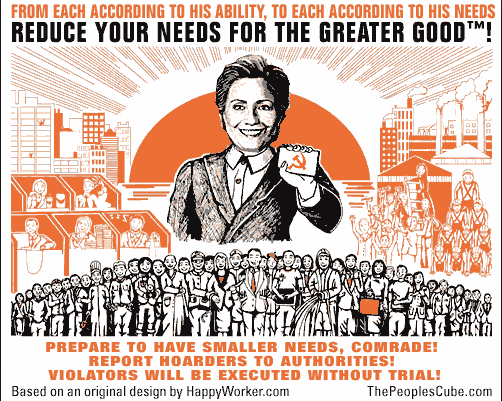 Hillary laid out her plan for the nation in the first of the presidential debates. What she describes as her vision for America is the continuation of cultural Marxism.

“First, we have to build an economy that works for everyone, not just those at the top. That means we need new jobs, good jobs, with rising incomes. I want us to invest in you. I want us to invest in your future. That means jobs in infrastructure, in advanced manufacturing, innovation and technology, clean, renewable energy, and small business, because most of the new jobs will come from small business. We also have to make the economy fairer. That starts with raising the national minimum wage and also guarantee, finally, equal pay for women’s work.

I also want to see more companies do profit-sharing. If you help create the profits, you should be able to share in them, not just the executives at the top.

And I want us to do more to support people who are struggling to balance family and work. I’ve heard from so many of you about the difficult choices you face and the stresses that you’re under. So let’s have paid family leave, earned sick days. Let’s be sure we have affordable child care and debt-free college.”

What Hillary described as her vision for the nation’s economy is nothing more than the advancement of Karl Marx and Fredrich Engels failed economic system. Marxism bases its system on the philosophy of redistribution of wealth. It requires entrepreneurs’ to share rightfully earned profits from using their talents, vision, courage, initiative, risk and implementation of their ideas with their employees who are already compensated fairly by wages and benefits for their work.

Marx believed that property should be shared and the “people” should control the economy. It is the government, however, who exercises the control for the people. Marx’s goal was to eliminate the gap between the rich and poor to bring about economic equality through redistribution of wealth, disincentivizing entrepreneurship.

The ideology has repeatedly failed.

Capitalism is based on private ownership of business and on the individual’s economic freedom. Business owners make the decisions about capital investment, production and costs, including wages and benefits. Capitalism is based on competition and flourishes under the philosophy of meritocracy in a free enterprise system. It is the philosophy of meritocracy rather than favoritism, preference, or social engineering that creates incentive for excellence which results in prosperity.

The Left reaches and keeps its power by promoting the Marxist system. They seduce an under-educated population by dangling more for less, achieved by taking from the creative, dynamic, productive, hard working segment and giving it to those who have been taught to believe they are entitled to it.

It’s this philosophy that has put us on an economic cliff.

The Left always speaks about helping out the “middle class”, yet due to their policies they continue to shrink it.

Marxism inevitably creates an oligarchy, a form of government in which most of the political power is embedded in a small segment of society, typically those who have the most wealth and political influence.

Hillary, who repeatedly assures her constituents that she will follow in President Obama’s footsteps, claimed during the debate that she knows what to do to grow the economy. Let’s review the outcome resulting from their shared economic philosophy.

While Obama claims that his administration has added 14 million jobs, in actuality he’s added 9.4 million.

Many of the jobs have been identified as low paying, part time jobs.

The unemployment numbers are contrived and have been since Lyndon B. Johnson. The U-3 unemployment rate series was created to eliminate counting people who stopped looking for work for more than a year as well as part-time workers seeking full-time employment.

Prior to Johnson’s change, the U-6 rate included part-time workers looking for full-time work and the unemployed who dropped out of the labor force over the prior year. It is still published by the Bureau of Labor Statistics.

Shadowstats.com is a website founded by economist Walter J. Williams (a.k.a. John Williams), who has a BA in Economics and an MBA from Dartmouth College.

Williams analyzes and publishes independent estimates of “real” unemployment statistics, using data such as the United States Department of Labor’s Bureau of Labor Statistics U-6 unemployment rates that are not calculated into the traditional media outlets’ computations.

The ShadowStats Alternate Unemployment Rate for August 2016 is 23.0%. This is probably more accurate than the reported 5% unemployment report of the Obama administration in view of the GDP reports.

The Gross Domestic Product is a lens into the health of our economy. It’s the total market value of all final goods and services produced in a country in a given year. It encompasses the total consumer, investment and government spending, plus the value of exports, minus the value of imports.

GDP illustrates the size of the economy and how it is performing. An increase in real GDP is interpreted as an indicator that the economy is doing well. When real GDP is growing robustly, employment is likely to be increasing because companies hire more workers and people have more money to spend.

When GDP is shrinking, employment and or wages are in decline.

The U.S. GDP growth has historically averaged about 2.5-3% a year.

President Obama will be the first president who has not achieved a year of 3% growth in our economy.

Redstate.com reports the breakdown of the yearly GDP growth for each year Obama was in office:

There are less people in the work force today than when President Obama took office in January 2009 when 80,529,000 Americans were not participating in the labor force. Since then 14,179,000 Americans have left the workforce. While some have retired, others gave up looking because they could not find work. However, each year, high-school and/or college graduates also enter the work force.

Hillary has repeatedly said she will continue President Obama’s policies that have incurred a national debt of nearly $20 trillion dollars; the US trade deficit is close to $40 billion; in August, 2011, the United States lost its ‘AAA’ rating for the first time in history. She noted the importance of building small businesses yet intends to follow Obama’s policies that are destroying our economy.

Hillary said Donald’s plan is “Trumped up ‘trickle down’ economics”.

How has that worked out for the nation?

Folks, this has nothing to do with race or gender. It has to do with the system of governing principles that the Left’s ideology fosters.

The real question is: Do you really want another four more years of pushing our nation deeper into shades of Marxism, debilitating debt, and economic deterioration?

ONE NIGHT ONLY: Movie "Targeted, Exposing the Gun Control Agenda"