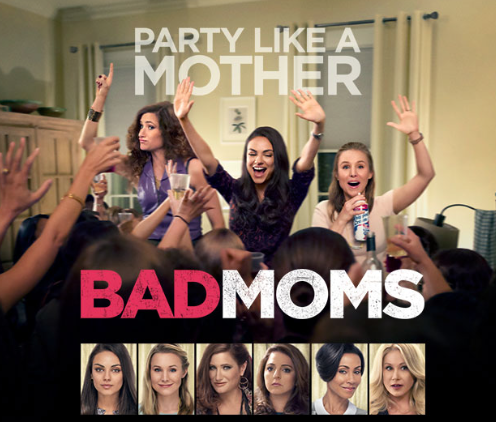 “Bad Moms” is a hilarious take on modern motherhood, tackling all the modern-day issues of helicopter parenting, trying to “do it all” and “be it all” to the point of exhaustion. Amy Mitchell (Mila Kunis) is an overwhelmed young mom of two adolescent-age children attempting to balance the demands of work, family, and school. She comes home from work one night to learn that her husband is having an online affair and kicks him out of the family home. Heading afterwards to a local watering hole, she commiserates with two fellow moms (played by Hahn and Bell) who decide that they have had enough with their attempts to perfect motherhood and instead decide to let loose and have some well-deserved fun.

An epic trip to the grocery store ensues, in which the moms let loose and embark in antics including chugging a gallon of chocolate milk mixed with alcohol; and to the horror of fellow shoppers, running wildly through the store laughing with glee and partying it up as though they were at a fraternity party.

The local school is having a PTA election, and the ultimate PTA president following the mold of Brie Van De Kamp (Applegate) is up for re-election. Applegate is the epitome of the uptight, perfect soccer mom dressed to the nines and wastes no time reminding her army of mom volunteers that every bake sale item must be sugar/gluten/fat/butter/flour-free. Amy decides she’s had enough of Gwendolyn’s constant demands for perfection, and with the support of her newfound friends, runs a campaign against her for the top spot. In the meantime, Amy finds a new love in the form of a widowed dad and fellow school parent while out on the town. As Amy’s candidacy rapidly gains momentum, Gwendolyn cannot stand to see her re-election jeopardized and

Bad Moms is a terrific, lighthearted and worthwhile flick that all moms can enjoy – or moms-to-be – and is a humorous take on the high expectations of modern motherhood. RATING: Five stars