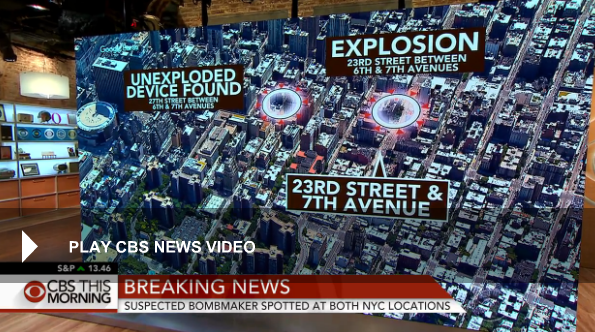 September 2016, is turning out to be a cruel and brutal month. The past week, from September 11th to the 18th, has been a broad revelation to me.

Possibly in a moment of karmic justice, the Democratic presidential nominee, Hillary Rodham Clinton, collapsed at the 9/11 memorial in New York. She was diagnosed with pneumonia after being rushed to receive medical assistance.

Rising from the physical infirm, that seems to follow her lately, Mrs. Clinton returned to the campaign trail like Countess Dracula after a blood transfusion. Maybe before passing out, she saw the ghosts of Benghazi that both her and President Obama failed to mention on September 11th. Maybe she is suffering from Parkinson’s disease or the delirium tremors of the advanced alcoholic. Maybe she had a moment of moral guilt; maybe and only maybe.

On September 17th, in a 12 hour span, we had two bombings in New York & New Jersey and an ISIS backed stabbing rampage in Minnesota. Yet, our President and Mrs. Clinton fail to call these attacks what they are: terrorism. Common Sense 101: No matter your affiliation, if you are setting off bombs and stabbing people in a brutal manner; you are practicing terrorism in action.

On the campaign trail in Colorado, Donald Trump stated, “I must tell you before I got off the plane a bomb went off in New York and nobody knows what is going on. But boy we are living in a time –we better get very tough, folks. We better get very, very tough. It’s a terrible thing that’s going on in our world, in our country and we are going to get tough and smart and vigilant.”

Mrs. Clinton, while on the campaign trail in New York, stated that she had been briefed “about the bombings in New York and New Jersey and the attacks in Minnesota.” She said, “We need to do everything we can do to support our first responders -also to let this investigation to unfold.” In my analysis, there is a broad difference in delivery here. Even if the sentiment, in essence, seems to be the same.

Yet the Clinton News Network, aka CNN, accuses Mr. Trump of “irresponsible behavior,” for calling a bomb a bomb. As no one with any active intelligence watches CNN for any real news, their commentary carries little weight.

Once upon a time, the American media merely reported the news, as opposed to writing campaign ads. I want to see again a responsible and honest media. Now let us backtrack a few days. In the midst of darkness there can be light and levity.

On September 14th, FBI Director, James Comey stated the following, “ My children, again, discipline me not to go on Twitter because because apparently people say bad things about me on Twitter. But things like Twitter offer us the opportunity only to encounter views consistent with our own, 24 hours a day.”

Director Comey states, “There’s an opportunity to feed that monster of a bias, that confirmation bias, all the time. So it accelerates that fractionalizing of our society, and it makes it much harder for people like me, like you, like the people in here, to speak reason to folks about institutions.”

Like the cartoon character, Bugs Bunny, would say “What a poltroon!” A poltroon is defined as being a spiritless coward. Director Comey personifies that definition with his failure to hold Hillary Clinton accountable in her recent e-mail scandal.

News flash to Director Comey, Hillary Clinton, and President Obama: The “monster of bias” that Director Comey speaks of is a reaction to the criminal behavior of our officials of government. It has not a thing to do with social media. We are merely tired of the relentless lies, the failure to address the participants in terrorism for the monsters they are, and the lack of accountability and honesty in government.

Social media is a tool. Read books as well as blogs. Most Americans criticizing the government, are doing their homework and are pursuing a variety of sources to do so.

Social media is a way for citizens, such as myself, to become commentators and critics of government. Do not complain, unless you are willing to stand up to do so. As the poet Dylan Thomas once wrote, “Rage, rage against the dying of the light.” America’s light has been dying for the past eight years.

But, we can stand together to light the candle when we intelligently enter the voting booth in November 2016. Make your vote count for something. If you are not happy with the status quo, don’t continue to vote for more of the same. Hillary Clinton recently called a certain strata of Americans “deplorables.” Mr. Trump calls patriotic Americans: hard working people that pay their taxes and love their country. Being a patriot deplorable? I guess I will continue to be little old despicable me..

The Silent Trumpers are "Coming Out"!