I hear them coming.  I jump up and run out into th 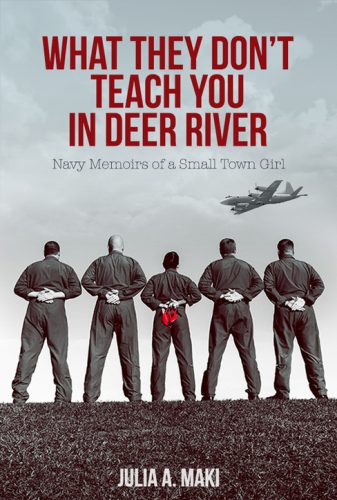 e middle of the yard. From the sound, I scan the sky fast enough to see the two F-16s appear in the sky just across field.  I shield my eyes a bit, squinting as they rocket across the sky, flying low towards the east and keep on watching until they’re no more than dots -hoping they’ll do it.  Sure enough, the sudden roar as they open up and climb ever higher out of sight, but still incredibly loud. I stand in awe and dream…

“The sound of freedom.”

While reading the book, “What They Don’t Teach You in Deer River” by Navy Veteran author Julia Maki, her description of my own memories of US Military jets flying overhead reminded me of the many times I stood in my yard looking at the sky. The similarities between Julia’s experience and mine end where I stood as a young mother dreaming of flying and when she realized the dream.

Julia grew up in northern Minnesota, enlisted in the Navy right after high school and worked her way up to an Aviation Warfare Systems Operator aboard P-3Cs.

I recently had the opportunity to talk with Julia about her book and some of her experiences while in the Navy, and about her memories of September 11, 2001.  The part about the jets touched me, even though it was only one paragraph in the first chapter.  Living close to an international airport, I was used to hearing planes day and night, but the sound of military jets is distinctly different. In the days, months and years after 9/11, those jets were a regular occurrence and they never failed to inspire and affect me.

We talked about her experiences of being from a small town, saying good bye to her family and friends for the first time, and beginning a new life at boot camp at Great Lakes, Illinois.  She described later going through SERE Training.  One of only three women at the training, which means Survival, Evasion, Resistance, and Escape, I had to wonder how difficult the training was, having heard stories from others over the years.  Julia details the experience in her book and describes going to the field training as a riding the bus to her prison term.

We talked a little about women in the military, and I asked her what she thought of women and the draft.  “It comes with the territory. If you’re after equal treatment, you have to be prepared to go equal across the board… You would hope it would be voluntary as it is now, but with a draft, usually its one to two years. There are already other countries such as Israel who require service for everybody after they graduate for a year or two of service.”

Trying not to get too political, we touched on the recent tensions felt over our national anthem and flag.  I mentioned how our country is portrayed by the media and how people see what the news shows day after day; yet looking around neighborhoods all across the country you don’t see any of that. I wondered what Julia’s thoughts were on it all, and if people would ever understand how good they have it in our country.

“I absolutely respect freedom of speech, but at the same time they miss a point here. You go to a third world country, you’ll see true oppression.” She said, having seen firsthand oppressive and impoverished conditions which people live all around the world.

“That was very eye opening for me. You can tell about it all day, you can write it in a book, but until you witness it in your own personal journey, it’s not the same.

I live in a military area, so I see a lot of flags everywhere, but I know it’s not like the general population. That’s the thing about Americans. We always seem to come together in a crisis… Especially things like now when things are breaking down with what the flag stands for.”

At the mention of a crisis, discussion turned to September 11, 2001.  I asked her, “You were stationed in Puerto Rico in September of 2001?”

“Yes, we were doing counter narcotic operations; drug runners. We were tracking them down from the sky and calling them into the Coast Guard. They’d go in and grab them. We had a huge territory that we were covering. When 9/11 actually hit, we were 3 hours away, one way, from the base.  We had just finished imaging a ship, a fishing vessel, where we were flying in low and taking pictures…  Right after we sent them, word came back that we need to RTB immediately. We need to return to base. With no explanation. We were like, ‘What?’  No one had done anything like that.

We had three hours to think about it… Your mind goes to all kinds of crazy places. Most likely thing we though was that one of our planes went down; one of our spotters.  Just the thought was devastating because in our squadron, we probably had about 200 people, and on a typical flight we carry 11 crew members, so to lose even 11 of them… everyone knew everybody.

So when we landed, they said, ‘We’re not shutting down, we’re going to turn it around.’ And the next crew was going to come on.  The entire tarmac was full- all the planes were parked, so that was real weird.  Anyway, we lowered the ladder…

We were told that the Pentagon was hit.  We figured it was a horrible accident… but then they told us they had crashed into the twin towers too. There was just so much to digest all at once.  As we went into the PR shop where they store all our gear, they have a TV. The only TV going on and everybody was gathered around it and they were showing it over and over again. It was just a moment of disbelief.

And it was that kind of panic then, like ‘Oh my goodness, who do I know that could be there…’  We were an East Coast squadron. There were a handful of people in our squadron who had family there. It was devastating.

They had grounded all commercial flights. They were taking just very select military flights, so they were taking the plane, our plane… and they landed in New Jersey at a base and grabbed a bunch of health care workers. Doctors and nurse,  to fly them into the closest place they could get into to try and help people.”

Remembering the isolation I felt that day, my family back in Canada, my husband at work and me with a baby, I had to ask Julia how they felt being so far away from everyone.

“All of us were completely alone. All of us on deployment were without our families, and that was the next reaction that everyone had. They just wanted to go home. The hardest part was that my husband was in Iceland.  My mom was back in Minnesota, and my father…  We were all we had at that time. You know, you had your crew. Your crew was your family.”

“When were you finally able to talk to your family or husband?” I asked.

“It was late, late that day. None of us had cell phones then, at least not with overseas service. We had one phone for everybody. We all made quick, like 10 minute calls to let everyone know we were ok.

The base was in complete lockdown. Nobody could get on or off. Bases all around the world, because you just didn’t know what was happening.  It truly was a day when everything changed…

One of the significant changes that I did see was the surge in enlistments right after 9/11. Everyone felt so helpless when we watch the towers fall, and wanted to do something to help our country. I also noticed the appreciation for the military seem to increase across the country. Anytime I was in uniform people would say, “thank you for your service.” Before 9/11 you just didn’t hear that very often.”

When Julia got out of the Navy in 2002, she describes the time after as a part of military life as a dependent, as her husband was still serving.  She remembers,

“We invaded Iraq in March 2003. So I can’t speak much for after that from the military perspective, or when Obama came into office. I know when we first invaded; most of the military were on board especially when we took Saddam Hussein out of power. But as the war has  continued on, I think many people- military and civilian- continue to wonder what we’re doing, and if it was the right thing to do. And that is where we as military and their families don’t necessarily understand the politics behind it all, but will continue to fight for the guy next to them and their families back home.”

Julia has since settled in Maryland with her husband where they both worked for the Department of Defense as civilians. They have three children and she was inspired to write children’s books about the military. She’s written four children’s books for kids who have parents in the military to describe some of what they do, and one, “Still My Dad” was written for children with parents that are wounded veterans, but can be applicable for anyone facing a disability.

I’ve read her first novel, her memoir, “What They Don’t Teach You in Deer River” and can say that I love it.  As a civilian, I was able to relate to many of her experiences, and I think others will find the same.  You can find Julia’s bio and books at Amazon, at Tactical 16 and more on upcoming events or how she continues to serve by helping Veterans at her website.