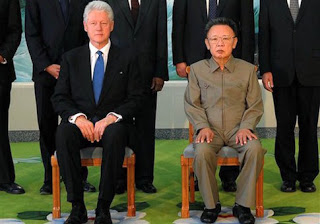 The two nuclear bombs dropped on Japan were known as “Little Boy” and “Fat Man.” The world today has two new nuclear bombs.

One is named “Fat Bill.” The other is named “Little Hillary.”

The “Bill Clinton” bomb is the one getting the most headlines as North Korea continues testing its nuclear weapons. The Communist dictatorship is on its fifth test already and achieved an explosion almost at the level of “Little Boy” which was dropped on Hiroshima.

North Korea has let it be known that this test has allowed it to produce standardized nuclear warheads “able to be mounted on strategic ballistic rockets” so that it can “produce at will and as many as it wants a variety of smaller, lighter and diversified nuclear warheads of higher strike power.”

Kim doesn’t just want a nuke. He wants a lot of nukes. And at the rate he’s going, he will have them.

And the man to thank for all that is Bill Clinton.

In the fall of ’94, Clinton told the American people that his deal with North Korea would help bring “an end to the threat of nuclear proliferation on the Korean Peninsula.

“After 16 months of intense and difficult negotiations with North Korea, we have completed an agreement that will make the United States, the Korean Peninsula, and the world safer. Under the agreement, North Korea has agreed to freeze its existing nuclear program and to accept international inspection of all existing facilities,” Bill Clinton assured the country.

The North Korean Deal was as worthless as his wife’s Iran deal. North Korea never kept its agreement. Like the Iran Deal, the North Korean Deal was never ratified by the Senate. Named the “Agreed Framework”, it amounted to as little as its name implied. Clinton’s people knew that North Korea had a uranium enrichment program going but chose to look away from its violations of the agreement because it would have been a political embarrassment for their boss and his diplomatic achievement.

The already worthless deal quickly became even more worthless once it was implemented. Like the Iran Deal there were secret deals within the deal, some of which still remain secret, likely because they reveal the scope of the Clinton sellout to the Communist dictatorship.

Inspections were delayed indefinitely. North Korea’s nuclear program had become known when it had previously delayed IAEA inspections for seven years. This time around it refused to resume inspections until we built them a nuclear power plant. Seven years after the deal, the IAEA was still trying to get access. Toward the end, the projected timeline for full inspections had been pushed to 2009.

North Korea’s violations were only made public under Bush. And so Clinton’s people who had given us the worthless deal blamed Bush’s people for scuttling their wonderful agreement.

Clinton’s North Korean Deal shared the same silly premise as the Iran Deal. It was based on the conviction that what North Korea really wanted wasn’t nuclear weapons, but nuclear power. If we just gave North Korea 500,000 metric tons of fuel oil a year and built some lighter nuclear reactors for the Communist dictator, it would lose all interest in building a bomb.

In a surprising twist that no one could have predicted, it turned out that North Korea wasn’t trying to cut electricity costs for its population of terrified starving slaves.

It really did want a bomb.

Bill Clinton sold America the same bill of goods on North Korea that Obama did on Iran. North Korea would have its isolation eased and “our relationship” with it would develop.

Even the rhetoric was the same. In Bill’s speech, he claimed that the deal with North Korea “does not rely on trust.” In Obama’s speech, he insisted that, “this deal is not built on trust.”

Except that it did and it does.

Iran got to collect its own samples and turn them over to the IAEA. That’s the definition of trust.

Two new nuclear reactors are being built. Like the North Korean variety, they’re supposed to be strictly light-water. Secret exemptions allow Iran to store unknown amounts of low-enriched uranium that can be purified into highly enriched, weapons-grade uranium and to maintain hot cells that can be used for plutonium separation. And the agreement actually starts to lapse after 11 years, instead of in 15 years, allowing Iran to double its rate of enrichment with a six month breakout time to a nuclear bomb.

On that “conservative” timetable, Iran will go nuclear even faster than North Korea.

Like North Korea, Iran will keep its real weapons program going on the side. It isn’t interested in nuclear power, but in nuclear weapons.

North Korea showed off its real agenda throughout the deal by continuing to develop ballistic missiles. Now it’s finalizing the process of being able to mount nuclear warheads on those missiles.

For the Iran Deal to be credible, we have to trust that Iran doesn’t want a nuclear bomb.

Hillary initiated the pivot to let Iran continue enriching uranium. As her campaign adviser said, “She recognized the difficulty of reaching a solution with zero enrichment.”

As with the rest of her politics, Hillary Clinton has held an infinite number of positions on Iran’s nuclear enrichment. But behind closed doors, this was her true position.

North Korea’s “Fat Bill” bomb and Iran’s “Little Hillary” bomb are interconnected. The two terror states, one red and the other green, one left-wing and the other Islamic, help each other.

Much as Bill helped North Korea and Hillary helped Iran.

The world faces the prospect of two terror states armed with nuclear weapons as the legacy for two politicians named Clinton who sold out their country and ushered in a new age of nuclear terror.

If a North Korean bomb is used in war, it will be Bill’s bomb. And if Iran uses nuclear weapons, it will be Hillary’s hellish explosion.

Stopping the two Clinton bombs may be the biggest national security challenge for a future president.