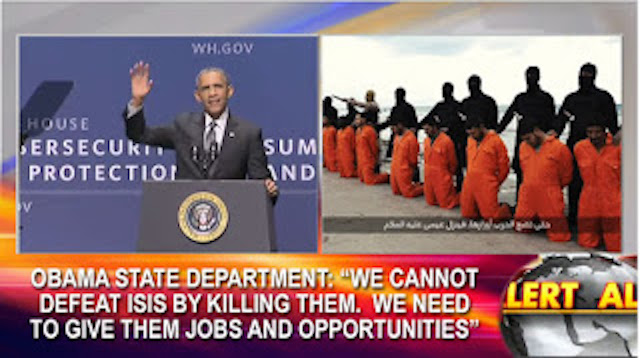 America’s terrorist shortage may be reaching an end. If Orlando didn’t satisfy you and San Bernardino left you wanting more. If you thought, why can’t we have more Boston Marathon bombings, Obama has your back, and your front and any other directions that a pressure cooker full of nails can hit you from.

The land of Washington, Jefferson and Mohammed Atta has reached a new milestone by
taking in Syrian refugee number 10,000. It’s unknown if the TSA will shower him with balloons and confetti once he passes the gate while clutching a Koran and a copy of the Caliphate Cookbook.

Either way we hit the big explosive ten thousand. And the clock is ticking.

Media outlets are puffing out sympathetic portrayals of the oppressed Syrians moving into some neighborhood near you, and far from the bosses behind the major media outlets. All these folks fleeing the violence of their own religion want is a safe place to live. And safe inevitably means non-Islamic.

There’s an obvious lesson here that neither they nor our expertly chattering classes seem able to grasp.

But a few years from now there will be bodies and the killer will have the same last name as one of those oppressed refugees who weren’t looking to be safe, but to make us unsafe.

Indistinguishable from press releases, the stories tell us that the refugees have been thoroughly screened. Or as thoroughly as you can screen people coming from a country that we have no diplomatic relations with and major portions of which are on fire so that even if its government, which also used to sponsor global and regional terrorism as a hobby to pass the time on long summer days, was willing to cooperate with our immigration authorities, the information would be mostly useless.

How are we going to screen a Syrian or Iraqi man who claims to be from a city held by ISIS?

Are we going to phone the local ISIS office and ask the head headchopper to confirm that the fellow smiling for the camera isn’t affiliated with ISIS? Perhaps the local Jihadi Jack or Allah Akbar Abdul will regretfully inform us that they would be happy to help, but the local government office was burned down during a massacre of Christians, Yazidis and American hostages.

But there is really no doubting the fact that Obama has subjected Syrian refugees to the most thorough screening imaginable.

The most persecuted peoples in Syria are Christians and Yazidis. Obama has officially resettled 9,144 Syrians. 9,077 of them are Muslims. A mere 47 Christians and 14 Yazidis managed to slip through the nets of his careful screening process.

Remember those people on television pleading to be saved from genocide and mass rape? Obama took in barely a dozen of them.

8,984 of the poor oppressed refugees are members of the genocidal Sunni Islamic majority in Syria. That’s 98 percent.

That’s not a statistic. It’s a war crime.

A dozen from the victimized minority… and nine thousand from the genocidal majority.

When Obama talks about how thoroughly the refugees were “screened”, this is what he means. He and his people thoroughly screened out the Christians and the Yazidis. They kept out anyone who isn’t a Muslim. Christians make up 10 percent of Syria and 0.5 percent of Obama’s resettled refugees.

How is it possible that the most persecuted group in Syria is also this disadvantaged in resettlement?

Imagine a government welfare program located in a major city with a ten percent minority population whose recipients were 98.2% rich white men? Obama, the DOJ, the EOC, the FBI, the EPA and OPIARE would be burying it in lawsuits, investigations and media lynch mobs before you could whistle.

And yet the champions of disparate impact investigations who treat simple numerical discrepancies as proof of discrimination want us to believe that the 98.2% and the 0.5% are an accident of fate.

Obama, Hillary and a million media voices squawk that a “religious test” for immigration would be Un-American. But there already is a religious test. It prioritizes Muslims and excludes everyone else.

And so here we are near that big ten thousand mark.

It’s not the only milestone.

America now admits more Muslim refugees than Christian refugees worldwide. Give us your tired, poor huddled masses yearning to behead. Send us your wretched, teeming refuse eager to get on welfare and then shoot up a Florida gay nightclub or a Texas army base to maximize the diversity of their victims.

13% of Syrian refugees, supposedly fleeing ISIS, stated in a poll that they support ISIS. That’s 1,300 ISIS supporters in that big ten thousand. Along with 47 Christians and 14 Yazidis.

This is what Obama’s right side of history looks like. His moral arc of the universe is a Jihadi sword on a Christian neck.

Support among Syrians for Al Qaeda runs as high as a third. Three-quarters of Syrians, a decade ago, backed Hamas.

The Temple you blow up with a HIAS donation may be your own.

And, to distract from all of this, there will be more hysterical media stories trumpeting the latest petty Muslim grievance. Sorry murdered Christians and Yazidi sex slaves, you just don’t matter as much as a supposed dirty look that some Muslim somewhere received and then wrote a Facebook post about that went viral when the media reported on it. Was your wife just murdered in a Muslim terrorist attack? Here, enjoy this latest piece on how Muslims at the site of the latest terror attack fear a backlash.

Our Muslim terrorism shortage has finally been solved. The media will never have to worry that it will be deprived of being able to cover the latest act of “Nothing to do with Islam” terrorism while advocating for gun control. The Koran’s call for killing non-Muslims doesn’t kill people. Sam Colt does.

As Allah is our witness, we’ll never go a weekend without a suicide bombing again.

10,000 is just a drop in the bucket. Our entire immigration system, from top to bottom, favors Islam. That horrifying 98.2% and 0.5% contrast is only a microcosm of the way that the game is rigged.

If you are a member of ISIS, you have a better chance of reaching America than your Yazidi sex slave.

That is the simple indictment of the monstrous crime committed by the left. It is not only Obama alone who perpetrated this evil. It is every member of the left, every willing liberal who cheered the refugees who aren’t and refused to hear about the refugees who are. In the last century, they allied with Stalin. In this century, they allied with Mohammed.

The empty hearts of the bleeding hearts did not bleed for the political prisoners in gulags or the starving peasant, the Rabbi shot in the snow or the dissident tortured in a psychiatric hospital. They bled red only for their Communist killers. Today the great empathizers care nothing for the victims of Islamic terror. Their every effort is directed at bringing as much of the Sunni Muslim population responsible for ISIS, Al Qaeda and Hamas to the United States at the expense of their Christian and Yazidi victims.

Obama has left the victims of Islamic terror to rot while filling our towns and cities with its perpetrators.

Pamela Geller and Robert Spencer on Islam: We Are Living in an Age of Fear