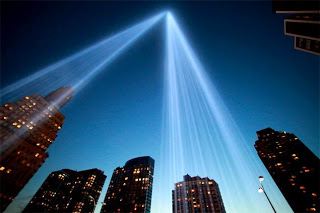 Looking back at 9/11 through the tunnel of years, like watching the painfully blue light of the memorial towers of light sweep the sky, is both remote and vast. Looking back through time is like looking at a mountain or the sky. At a skyscraper or thousands of graves. A vastness beyond meaning.

“The world will little note, nor long remember what we say here, but it can never forget what they did here,” Lincoln said in the Gettysburg Address. It was not that way at Gettysburg, but it has been that way at Ground Zero. All the words fall away and we are left only with the shock and the horror.

The hole in the world.

It is the second part of Lincoln’s phrasing that reveals where the hole in our world lies. “It is for us, the living, rather, to be dedicated here to the unfinished work which they who fought here, have, thus far, so nobly advanced.”

What unfinished work was advanced since that day? What work is there to advance? The Civil War could be won. The dead of Pearl Harbor could be laid to rest with victory. It is the dead of the unfinished wars who haunt us. It is why the Vietnam MIA is still with us. Victory carries its own meaning. As does even defeat. It is the twilight of the unfinished war whose meaning is unclear. When we cannot put a purpose to death, then it haunts us with the mortality of meaninglessness.

The true horror of death is not personal fear. It is the creeping sense of futility. The terror that we labor in vain and sacrifice for naught. It is this mortality of purpose against which we erect walls of conviction and ideas in order to achieve national and civilizational immortality.

Our work is civilizational purpose. In war, victory. In peace, prosperity. In industry, ingenuity. In science, scholarship. In fellowship, freedom. In contention, character.

When we do not know what the unfinished work is, then we are unable to finish it. We are beset by a sense of purposelessness. We sense our own civilizational mortality.

In previous wars, both sides knew the enemy all too well. In this war, we do not know the enemy or ourselves. We cannot define the borders between us. Moral equivalence all too easily creeps in. We kill and they kill. We bomb and they bomb. We have beliefs and they have beliefs.

A civilization that does not know itself easily falls into such childish equivalences. It ricochets from a borderless equivalence to a bordered tribalism both of which deny our exceptionalism. The former make a special exception for everyone else while the latter make a special exception for us. But neither know who we are except that we are us. Or rather, cynically, that we happen to be us.

Civilization is the means by which we know ourselves. It is in the character of our arts, our wisdom, our striving, our achievements and our decency. Civilized men and women are not threatened by barbarians. They apply their skill and strength to subdue or destroy them. It is when civilization loses the ability to distinguish between its own virtues and those of the barbarian that it is destroyed.

If we had been civilized, then 9/11 would have been a temporary tragedy. But we had lost the ability to distinguish between ourselves and the barbarians. Out of this loss of confidence, we set out on a missionary expedition to save them by converting them to our faith in democracy. When that failed, we encouraged them to come and convert us to their faith in our inferiority and their superiority.

For that, when all else is swept aside, is what Islam is. It is the conviction that the infidel is inferior and the Islamic man his superior. It is this testament of faith embodied in the cry, Allahu Akbar.

The barbarian measures his superiority purely in strength. And when civilized men lose their civilization, but not their survival instincts, then they too do likewise. Even when it ends in victory, the work remains unfinished. Civilizations are not built by momentary victories, but by character.

America was not born because George Washington had the bigger army, but because those fighting for independence had the character to persevere and endure where the British and their mercenaries did not. They knew what they were fighting for and it was a bigger dream than mere empire.

A finished civilization is an edifice. A growing civilization has unfinished work… whose labors it envisions, harnessing its energies and applying its vision to leap from one grand purpose to another.

The fight against Islamic terrorism is unfinished for the same reasons that a thousand other symptoms of the malaise can be spotted in our civilization. We do not know who we are. We have skills, but we lack purpose. We have strength, but not virtue. We have conviction, without character. We have inherited the greatest civilization the world has ever seen, but we are preparing for its passing.

The forgetting has been a long process. Few living today can even remember a time before the great forgetting overtook us and we lost confidence, meaning and purpose. But the forgetting can be undone. The meaning is in each of us. We express it not only in words and essays, but in how we live our lives and how we give them up. In this way, war is a foreshortening of civilization.

And yet the same sacrifices and challenges of war are present in our ordinary lives. If we doubt that, consider the men who raced up impossible heights, their backs weighed with equipment, to save lives. For a brief shining moment, we saw them as examples to emulate. And then the noise and mire of the media carried us away again. And we laughed and we sighed and we forgot.

Civilization is aspiration. When we reach for something higher and better, it makes us stronger. When we admire actual heroes, then we touch the nobility on which great civilizations are built.

We exist in a vast universe. Each twinkling star in the night sky sweeps around it unknown, unseen worlds. Even the smallest mountain dwarfs us. Our cities are nothing to the ocean tide. Our voices are nothing to the howl of the storm. It is the vastness of our aspirations that carry us forward.

Our unfinished work is not merely to defeat the barbarians, but to build up a civilization against which not only their malice will crumble, but which will outshine them to nothingness.

Then the ghosts, the shapes half-seen in the blue rays of light, the twilight voices in the humid September air, will have their peace.

The Enemies Within: An Exclusive PolitiChicks Interview with Trevor Loudon