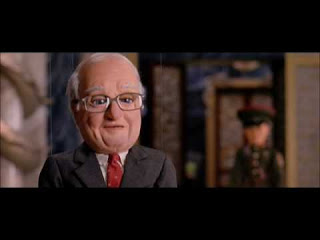 Sum up our failed Middle East policy in a nine-letter word starting with an S. Stability.

Stability is the heart and soul of nation-building. It’s the burden that responsible governments bear for the more irresponsible parts of the world.

First you send experts to figure out what is destabilizing some hellhole whose prime exports are malaria, overpriced tourist knickknacks and beheadings. You teach the locals about democracy, tolerance and storing severed heads in Tupperware containers.

Then if that doesn’t work, you send in the military advisers to teach the local warlords-in-waiting how to better fight the local guerrillas and how to overthrow their own government in a military coup.

Finally, you send in the military. But this gets bloody, messy and expensive very fast.

So most of the time we dispatch sociologists to write reports to our diplomats explaining why people are killing each other in a region where they have been killing each other since time immemorial, and why it’s all our fault. Then we try to figure out how we can make them stop by being nicer to them.

The central assumption here is stability. We assume that stability is achievable and that it is good. The former is completely unproven and even the latter remains a somewhat shaky thesis.

The British wanted stability by replicating the monarchy across a series of Middle Eastern dependents. The vast majority of these survived for a shorter period than New Coke or skunk rock. Their last remnant is the King of Jordan, born to Princess Muna al-Hussein aka Antoinette Avril Gardiner of Suffolk, educated at the Royal Military Academy, Sandhurst, and currently trying to stave off a Muslim Brotherhood-Palestinian uprising by building a billion dollar Star Trek theme park.

The British experiment in stabilizing the Middle East failed miserably. Within a decade the British government was forced to switch from backing the Egyptian assault on Israel to allying with the Jewish State in a failed bid to stop the Egyptian seizure of the Suez Canal.

The American experiment in trying to export our own form of government to Muslims didn’t work any better. The Middle East still has monarchies. It has only one democracy with free and open elections.

Israel. Even Obama and Hillary’s Arab Spring was a perverted attempted to make stability happen by replacing the old Socialist dictators and their cronies with the political Islamists of the Muslim Brotherhood. They abandoned it once the chaos rolled in and stability was nowhere to be found among all the corpses.

It might be time to admit that barring the return of the Ottoman Empire, stability won’t be coming to the Middle East any time soon. Exporting democracy didn’t work. Giving the Saudis a free hand to control our foreign policy didn’t work. Trying to force Israel to make concessions to Islamic terrorists didn’t work. And the old tyrants we backed are sand castles along a stormy shore.

Even without the Arab Spring, their days were as numbered as old King Farouk dying in exile in an Italian restaurant.

If stability isn’t achievable, maybe we should stop trying to achieve it. And stability may not even be any good.

Our two most successful bids in the Muslim world, one intentionally and the other unintentionally, succeeded by sowing chaos instead of trying to foster stability. We helped break the Soviet Union on a cheap budget in Afghanistan by feeding the chaos. And then we bled Iran and its terrorist allies in Syria and Iraq for around the price of a single bombing raid. Both of these actions had messy consequences.

But we seem to do better at pushing Mohammed Dumpty off the wall than at putting him back together again. If we can’t find the center of stability, maybe it’s time for us to embrace the chaos.

Embracing the chaos forces us to rethink our role in the world. Stability is an outdated model. It assumes that the world is moving toward unity. Fix the trouble spots and humanity will be ready for world government. Make sure everyone follows international law and we can all hum Lennon’s “Imagine”.

Not only is this a horrible dystopian vision of the future, it’s also a silly fantasy.

The UN is nothing but a clearinghouse for dictators. International law is meaningless outside of commercial disputes. The world isn’t moving toward unity, but to disunity. If even the EU can’t hold together, the notion of the Middle East becoming the good citizens of some global government is a fairy tale told by diplomats while tucking each other into bed in five-star hotels at international conferences.

It’s time to deal with the world as it is. And to ask what our objectives are.

Take stability off the table. Put it in a little box and bury it in an unmarked grave at Foggy Bottom. Forget about oil. If we can’t meet our own energy needs, we’ll be spending ten times as much on protecting the Saudis from everyone else and protecting everyone else from the Saudis.

Then we should ask what we really want to achieve in the Middle East.

We want to stop Islamic terrorists and governments from harming us. Trying to stabilize failed states and prop up or appease Islamic governments hasn’t worked. Maybe we ought to try destabilizing them.

There have been worse ideas. We’re still recovering from the last bunch.

To embrace chaos, we have to stop thinking defensively about stability and start thinking offensively about cultivating instability. A Muslim government that sponsors terrorism against us ought to know that it will get its own back in spades. Every Muslim terror group has its rivals and enemies waiting to pounce. The leverage is there. We just need to use it.

When the British and the French tried to shut down Nasser, Eisenhower protected him by threatening to collapse the British pound. What if we were willing to treat our Muslim “allies” who fill the treasuries of terror groups the way that we treat our non-Muslim allies who don’t even fly planes into the Pentagon?

We have spent the past few decades pressuring Israel to make deals with terrorists. What if we started pressuring Muslim countries in the same way to deal with their independence movements?

The counterarguments are obvious. Supply weapons and they end up in the hands of terror groups. But the Muslim world is already an open-air weapons market. If we don’t supply anything too high end, then all we’re doing is pouring gasoline on a forest fire. And buying the deaths of terrorists at bargain prices.

Terrorism does thrive in failed states. But the key point is that it thrives best when it is backed by successful ones. Would the chaos in Syria, Nigeria or Yemen be possible without the wealth and power of Saudi Arabia, Qatar and Iran? Should we really fear unstable Muslim states or stable ones?

That is really the fundamental question that we must answer because it goes to the heart of the moderate Muslim paradox. Is it really the Jihadist who is most dangerous or his mainstream ally?

If we believe that the Saudis and Qataris are our allies and that political Islamists are moderates who can fuse Islam and democracy together, then the stability model makes sense. But when we recognize that there is no such thing as a moderate civilizational Jihad, then we are confronted with the fact that the real threat does not come from failed states or fractured terror groups, but from Islamic unity.

Once we accept that there is a clash of civilizations, chaos becomes a useful civilizational weapon.

Islamists have very effectively divided and conquered us, exploiting our rivalries and political quarrels, for their own gain. They have used our own political chaos, our freedoms and our differences, against us. It is time that we moved beyond a failed model of trying to unify the Muslim world under international law and started trying to divide it instead.

Chaos is the enemy of civilization. But we cannot bring our form of order, one based on cooperation and individual rights, to the Muslim world. And the only other order that can come is that of the Caliphate.

And chaos may be our best defense against the Caliphate.

"What They Don't Teach You in Deer River": Interview with Navy Veteran Author Julia A. Maki