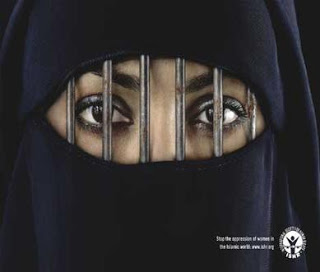 The media has found its latest civil rights cause. It’s not the plight of Christians in Muslim countries who are being blocked from coming here as refugees because Obama’s refugee policy favors Muslims. Obama brought over 2,000 Syrians here in July. Only 15 of them were Christians.

But instead the media has highlighted the civil rights cause of the burkini.

The “Burkini”, a portmanteau of “Burka”, the all-encompassing cloth prison inflicted on women in Afghanistan by the Taliban, and “Bikini”, was banned in France along with its parent, the Burka.

While Muslims massacre innocent people in the streets to shouts of “Allahu Akbar”, the media has once again decided to ignore these horrors in favors of broadcasting some petty Muslim grievance.

Does it matter what Muslim women wear to the beach? Arguably the government should not be getting involved in swimwear. But the clothing of Muslim women is not a personal fashion choice.

Muslim women don’t wear hijabs, burkas or any other similar garb as a fashion statement or even an expression of religious piety. Their own religion tells us exactly why they wear them.

“O Prophet! Tell your wives and your daughters and the women of the believers to draw their cloaks (veils) all over their bodies that they may thus be distinguished and not molested.” (Koran 33:59)

This isn’t some paranoid misreading of Islamic scripture. Islamic commentaries use synonyms for “molested” such as “harmed”, “assaulted” and “attacked” because women who aren’t wearing their burkas aren’t “decent” women and can expect to be assaulted by Muslim men. These clothes designate Muslim women as “believing” women or “women of the believers”. That is to say Muslims.

One Koranic commentary is quite explicit. “It is more likely that this way they may be recognized (as pious, free women), and may not be hurt (considered by mistake as roving slave girls.)” The Yazidi girls captured and raped by ISIS are an example of “roving slave girls” who can be assaulted by Muslim men.

And this is not just some relic of the past or a horror practiced by Islamic “extremists”. It’s ubiquitous. A French survey found that 77 percent of girls wore the hijab because of threats of Islamist violence. It’s numbers like these that have led to the French ban of the burka and now of the burkini.

When clothing becomes a license to encourage harassment, then it’s no longer a private choice.

Muslim women wearing a burka, a hijab or a burkini are pointing a sign at other women. The sign tells Muslim men to harass those other women instead of them. It’s not modesty. It’s the way that Muslim women choose to function as an instrument of Muslim violence against non-Muslim women.

In the Islamic worldview, sexual violence is the fault of the victim, not the perpetrator. From the dancing boys of Afghanistan to the abused women of Egypt, the fact of the assault proves the guilt of the child or the woman who was assaulted.

“If you take uncovered meat and put it on the street, on the pavement, in a garden, in a park or in the backyard, without a cover and the cats eat it, is it the fault of the cat or the uncovered meat?” the Grand Mufti of Australia said. “The uncovered meat is the problem.”

The Grand Mufti wasn’t discussing cats or meat. He was talking about gang rapes by fourteen Muslim men. “If she was in her room, in her home, in her hijab, no problem would have occurred,” he said.

This is why there is a burka ban and a burkini ban. It’s why there should be a hijab ban. The existence of these garments gives license to Muslim men to target non-Muslim women. They allow Islamists to impose them as a standard by singling out women who don’t wear them. And they encourage Muslim men to carry out assaults on non-Muslim women who don’t comply with Islamic law.

That is what France has rejected. It’s what every country that respects the rights of women to be free from being “molested” by the “believers” who get their morality from Mohammed, a serial rapist and pedophile from whom no woman, including his own son’s wife, was safe, ought to reject.

The media has chosen to be deeply outraged by France’s ban of the burka and the burkini. It does not seem especially interested in the fact that Saudi Arabia forces women to wear the abaya, a covering not too different from the burka, not to mention not being allowed to drive or often leave the house. Or that Sudan’s Islamist regime arrested Christian women in front of a church for wearing pants.

Islam expands through violence. It imposes its standards through violence. Before the ban, the burkini, much like the burka, had already come to be associated with violent clashes. In one such incident in France, a man was shot with a harpoon. It’s not surprising that the French have grown tired of this.

The burkini ban, like the burka ban, is understandable. And yet it’s not a final answer. It limits the scope of Muslim violence against women. But it does not meaningfully contain it or end it.

The wave of sexual assaults by Muslim migrants in Germany make it quite clear that the moralistic amorality of Islam, in which women who aren’t dressed the right way are fair game, cannot coexist with the right of European women to leave the house without wearing approved Islamic garb.

Banning the burkini or the burka alone will not stop the assaults. Only ending Islamic immigration will.

U.K. Authorities Escalate Persecution for Standing Up to Sharia