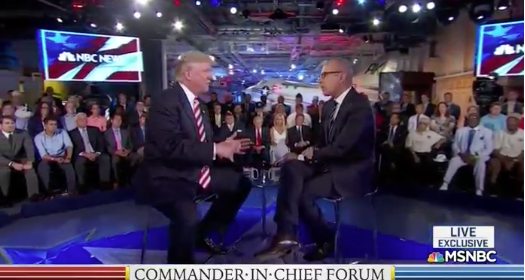 The reviews are in for Matt Lauer, and they are horrendous.

The anchor of NBC’s “Today” is finding himself widely panned for his performance as moderator of the NBC News presidential nominee forum in New York on Wednesday night.

Many critics charge that Lauer failed to challenge Donald Trump on some bizarre and outright untrue statements. When Trump claimed — falsely — that he was against the Iraq war, Lauer gave no pushback. When Trump boasted that his visit to Mexico was a success because the country’s finance minister resigned in its aftermath, there was no follow-up to the perplexing pronouncement. When Trump contradicted himself on the worth of America’s top military brass, he was barely called on it.

Hillary Clinton was not treated with such kid gloves. She got grilled on the details of her private email server for so much of her allotted time that when discussion moved to weighty policy issues, Lauer cut her off while she tried to answer, saying the clock was ticking.

It’s not the first time a broadcast news star has found moderating such an event to prove anything but the anticipated career boost. CNBC journalist John Harwood received a drubbing for his role in the GOP primary debates — but Harwood got attacked for being too confrontational.

Robert Spencer: If You Don't Want to Assimilate, Don't Come.