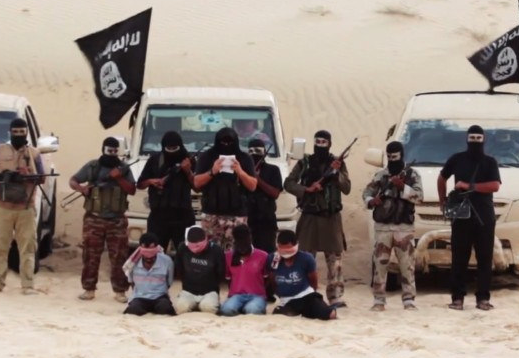 Muslims “soldiers” for ISIS brutally beheaded 84 year old Father Hamel inside a Catholic church.  The gesture was planned, revealing the political motive of ISIS to reclaim its lands taken by Crusaders as the National Review observed:

[I]n targeting Catholicism, this incident pays special fealty to ISIS’s deeper ideological motivations. After all, as the originating authority for the Crusades, and as the perceived home of European Christendom, the Catholic Church is despised by ISIS leaders. The group has previously plotted against the Vatican and Pope Francis, and references to Rome often appear in sermons by ISIS leaders. This desire to purge and reclaim European territory takes root, at least in part, in Islamist humiliation over Muslims’ expulsion from Europe under Isabella I, Spain’s Catholic queen in the 15th century. And while the anti-Catholic motivation might seem peripheral to us, it is a key engine of the enemy’s war machine. ISIS sympathizers will be especially proud of the assassination of a Catholic priest. (emphasis added)

But this was not just a political attack.  At its root, it was a religious attack.  The French government was not attacked.  The Catholic Faith was attacked.  The Catholic priest was brutally savaged and publicly sacrificed, beheaded while saying the Mass, dying in his own blood at the foot of the altar, the same altar upon which he had participated in bringing about the daily miracle that is the center of the Catholic Mass:  the transubstantiation of bread and wine into the Eucharist, the literal Body of Christ.

the Catholic Church professes that, in the celebration of the Eucharist, bread and wine become the Body and Blood of Jesus Christ through the power of the Holy Spirit and the instrumentality of the priest. Jesus said: “I am the living bread that came down from heaven; whoever eats this bread will live forever; and the bread that I will give is my flesh for the life of the world. . . . For my flesh is true food, and my blood is true drink” (Jn 6:51-55). The whole Christ is truly present, body, blood, soul, and divinity, under the appearances of bread and wine—the glorified Christ who rose from the dead after dying for our sins.

Thus the act of killing a Catholic priest on the altar is particularly significant to ISIS.  It is a direct assault against Christ Himself and on His Divinity.

Nor is the sacrifice of Father Hamel the only recent murder of a priest.  A Coptic Christian priest was gunned down last month in “a hail of bullets” after attending Mass at The Church of the Martyr of St George in Sinai, Egypt.  Witnesses say the priest was targeted by men lying in wait for him.

Days ago Muslim youth assaulted Catholic worshippers, “beating everyone in sight, including security guards attached to the church” ultimately driving them from the Saint Philip Catholic Church in Baki Ikun in near the capital of Nigeria.  The gang “wreaked havoc on the church building, vehicles and parishioners” asserting that Christians do not have the right to worship on Fridays.

These savage attacks are escalations in the expanding and ongoing war on Christianity.  “Muslims in Iraq have declared war against Catholicism, attacking monks and priests and forcing them to leave immediately.”

One website purports to list “targeted acts of terrorism on Christian civilians and church workers by religious Muslims since September 11th, 2001.”   Yet they are nothing new.  The persecution of Catholic priests at the hands of Muslims stretches back hundreds of years.

[In] 1480 an Ottoman force commanded by Gedik Ahmed Pasha . . . landed beneath the walls of Otranto….after a 15-day siege…the walls were breached…. Upon reaching the cathedral ‘they found Archbishop Stefano Agricolo, fully vested and crucifix in hand’ awaiting them with Count Francesco Largo. ‘The archbishop was beheaded before the altar, his companions were sawn in half, and their accompanying priests were all murdered.’ After desecrating the Cathedral, they gathered the women and older children to be sold into Albanian slavery. Men over fifteen years old, small children, and infants, were slain.[5]

In response to the beheading of Father Hamel, one devout Catholic French woman, Marion Le Pen, has eloquently issued a rallying cry to Christians around the world to resist Islam.

Either we kill Islamism or it will kill us again and again. You are with us and against Islamism, or you are against us and for Islamism… Those who choose the status quo become complicit with our enemies. …

Faced with the threat that weighs on the France, I decided to join the military reserve. I invite all the young patriots to do the same…. In the West as in the East, Christians must stand up to resist Islam!

She added: “They kill our children, murdering our policemen and slaughter our priests. Wake up!”

Free movement of goods and people is a way of feeding terrorism. France’s migration policy has contributed to the explosion of radical Islam here and to the genesis of those terrorists who are born in France

Democrats are willfully bind to ISIS.

Napoleon observed that the greatest weakness in enemy generals was they assumed their opponents would behave as they would.  Today we would call Napoleon’s observation inappropriate “projection” of one’s own values onto others.  This failing explains much of the dystopia in politics and most especially the American liberal view of Islamic terrorism.

Simply put, it means liberals view terrorism, whether Islamic or otherwise, as an arm of class rebellion or class warfare and nothing more. They view terrorism in terms of Marxist ideology rather than in terms of a religious ideology. Why?

To the highly secularized, often atheist/agnostic liberal, it is virtually inconceivable that rational people could model their behavior after religious beliefs. It is one thing, for example, for secular Jews to exchange presents over Chanukah or secular Christians to have Christmas trees and Easter bunnies; however, they regard any faith belief beyond that to be at best backward superstition and at worst hypocritical posturing. Therefore, liberals reject out of hand that Islamic terrorists act out of Islamic religious ideology.  It is what Obama himself says that ISIL itself is not a religious group.  They simply refuse to accept the premise that Islamic terrorism is rooted in and motivated by the Muslim faith in as much as is it is derived from religious ideology.

Within that paradigm, liberals likewise view conservative positions as necessarily wrong-headed, deriving from racial or ethnic “hate”.  In liberals’ view, neither terrorists or Christians can possibly be sincere in their beliefs since rational people do not base their life on religious faith.  Therefore both Islamic terrorists and conservative Christians must be irrational people and unrepresentative of any faith.  Liberals dismiss and marginalize both.  The glaring exception, of course, is when liberals wish to smear Christianity based on perceived historical events, but this is likely more a matter of political opportunism.

Because liberals do not hold religious convictions, they discount the fundamental religious motivations of faith of those who do. In their myopic narcissistic arrogance, liberals are incapable of comprehending, much less empathizing with, the sincerity of faith-based motivations.

Because liberals do not hold a faith, they cannot understand those who do.  Liberals believe in secular power.  Their motivating ideology is one of power and control.  They erroneously (and unfairly) project that same ideological motivation for power on their opponents, ascribing to conservatives corporate greed, slavery, and the control over women’s bodies.  They cannot comprehend a faith-based motivation, and instead ridicule religious beliefs and those who hold them (eg. bitter clingers) as insincere cover for the true ulterior motivation only liberals understand.

This myopic viewpoint explains liberals’ anathema to the Constitution which derived from a Judeo-Christian viewpoint in which God’s natural law empowers the individual and limits governmental power.

Islam informs the faithful that their god allah demands obedience from his slaves.  As his subjects, Muslims are compelled by their faith to serve him by forcing the world to submit to his will which Muhammed has laid out quite precisely in the Quaran.  Liberals understand the Islamic compulsion to enforce submission to a central authority.  They just quibble about the ideology which motivates the violent methodology. They dismiss the theocratic element which is the heart of Islam and of sharia.  Thus to liberals, Muslim terrorists aren’t terrorists at all — they are simply advancing submission to a centralized government.

Liberals cannot fathom what motivates conservatives’ political convictions.  Conservatives proceed from a Christian viewpoint that God is a loving, merciful father to His children.  God the Father gifts his children with the sacred gifts of life and free will, and seeks a individual loving relationship without compulsion with each one of His children.  Informed by such faith, Christians cannot compel others by means of physical or governmental force, and reject the notion that salvation can come through a group or association or governmental organization since salvation comes only through an intimate personal individual’s acceptance of God’s will.

All Illegal Immigrants Committed Crime and Must Submit to Our Laws

File This Under "Gross": Huma Dumping Weiner After Sexting Continues