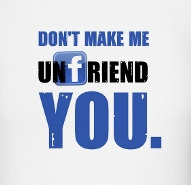 If you are like me, you’ve probably been “unfriended” on Facebook for posting your political views on the upcoming Presidential election.  It seems like every day I get more and more people dropping away as I post the true facts about Hillary Clinton and her email and foundation scandals.  Sometimes I get comments which range from slightly annoyed to out and out vitriol and hatred.  This election has really sent this country into a frenzy and you are either on one side or the other.  We probably haven’t seen this much division since the 1860’s!  Needless to say, it must be happening to millions of people because the AP posted it as “The Big Story” by Dan Sewell over the weekend.

Facebook says that from Jan. 1 through Aug. 1, 100 million people on Facebook in the United States generated 4 billion posts, comments, shares and reactions about the election.

Facebook didn’t have “unfriending” numbers, but that online action of cutting off communication appears to be on the rise this summer along with the other election-related activity.

“I’ve seen that myself increasingly,” said Scott Talan, an American University communication teacher who studies social media and politics. “They range from pretty harsh, graphically laced, attacks upon people … to statements of ‘if you support this person, you can no longer be my friend.'”

Why A Refugee Stabbed a Belgian Priest

Obamacare: Am I My Brother's Keeper?