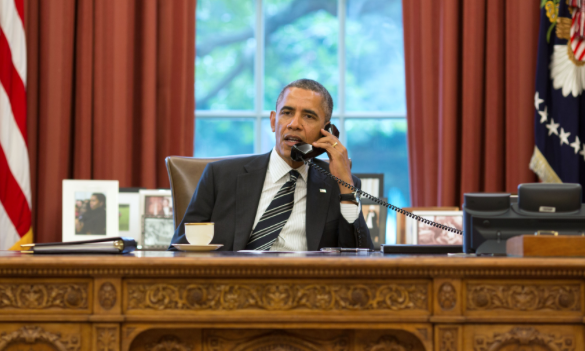 In January, the Obama Administration secretly transferred $400 million dollars to Iran.  It was an installment of a much larger sum and it coincided with the release of four American hostages detained in Tehran.

The money represented the first installment of a $1.7 billion settlement the Obama administration reached with Iran to resolve a decades-old dispute over a failed arms deal signed just before the 1979 fall of Iran’s last monarch, Shah Mohammad Reza Pahlavi….

“With the nuclear deal done, prisoners released, the time was right to resolve this dispute as well,” President Barack Obama said at the White House on Jan. 17—without disclosing the $400 million cash payment.

Senior U.S. officials denied any link between the payment and the prisoner exchange. They say the way the various strands came together simultaneously was coincidental, not the result of any quid pro quo.

Set aside the obvious quid-pro-quo-Hostages-for-Cash angle to consider the timing. Obama’s transfer wasn’t revealed during the DNC convention last week.  A Mr. Khizr Khan recently spoke at the Democrat National Convention, attacking Republican nominee Donald Trump for advocating a temporarily halt to Islamic immigration from countries with a record of exporting terrorists.

Mr. Khan’s son, U.S. Army Captain Humayun Khan, was killed in Iraq in 2004.  The media went wild praising the “Gold Star” father’s criticism of Trump — who had nothing whatsoever to do with Captain Khan’s death — while ignoring the Khans’ deep financial interest in Islamic immigration and their connections to Hillary Clinton.

Now we learn Obama secretly delivered $400 million dollars in cash as a downpayment to a terrorist theocracy that directly and indirectly murdered thousands of American soldiers just like Capt. Khan.

And Obama has the unmitigated gall to call Donald Trump “unfit for office.”  So don’t hold your breath for the media to interview Mr. and Mrs. Khan for their reaction in light of Obama’s arguable funding of Iranian terrorism.  Because for the liberal media, it is all about the base.

NSA Whistleblower: Agency Has All of Clinton’s Deleted Emails