A constant struggle in the practice of democracy is the danger of wealthy individuals unduly influencing election results and other political processes through strategic use of their money – essentially, buying those government 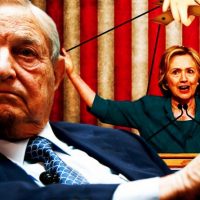 policies and actions which they find desirable without relying on the established representative system, thus subverting democracy. To be sure, the rich have the same right as everyone else to express their political opinions and rebut those of others with whom they disagree, and their vote is exactly as loud as yours or mine. But when vast financial coffers become political weapons that allow them to reach beyond the scope of the typical person into the inner workings of official decision-making in a way the rest of us often can’t even see, let alone answer, then they have risen themselves beyond the God-given station of private citizen into a realm that brings them dangerously close to being a usurper.

Which brings us squarely to George Soros, the liberal billionaire (and, in fact, one of the world’s 30 richest people), who seems to enjoy involving himself in American politics. Which would be well and good but were it not for the fact that this involvement often goes well beyond public statement expressing his opinions. Take, for example, the leaked internal memo from Open Society Foundations, the Soros firm in charge of affecting his political influences, concerning an immigration case before the Supreme Court. At issue was the fate of President Obama’s nigh-imperial decree that illegal immigrants caught within the United States were not to be deported and must be granted work visas. Soros, who strongly supports the “rights” of illegal immigrants to violate US immigration law, apparently used his foundation to lean on Supreme Court Justices and affect a “favorable” outcome in the case. Let us take only a moment to meditate on the fact that the Supreme Court, by constitutional design, is intended to be an appointed judicial check on government authority, its Justices put in place by elected officials but insulated from the shifting politics of the day by not themselves facing direct election. The very notion of a shadow-cloaked billionaire exerting his personal influence on this protective branch of government in the hopes of finagling decisions to his liking is chilling, to say the least.

Then we have other official OSF documents, these obtained by hackers who broke into the institution’s database, detailing Soros’ efforts to lean on the Obama administration to allow an additional 100,000 immigrants per year to enter the nation. Soros himself wrote a letter to the President encouraging this move, but the hacked memos speak of extensive (and less visible) lobbying efforts and other forms of pressure on the government to increase the immigration cap. The documents themselves seem almost to gloat over the success of these efforts:

“In the face of this pressure, the Obama administration announced Sept. 20 that by 2017, it would raise to 100,000 the total number of refugees the U.S. takes worldwide each year.”

If all of this isn’t disturbing enough, other evidence hints at Soros’ remaining efforts to nudge the American government, such as the influence he exerted on spurring the Ferguson protests and the racial unrest that has resulted, and of course his involvement with Hillary Clinton and the Democratic party. He is, quite frankly, a shady figure who has built a corporate empire in Europe and now uses his riches to influence politics here. He is also a megalomaniac, having previously declared that he considers himself “some kind of god”. The United States, and the American people, do well to watch the behind-the-scenes political manipulations of this man, whose agenda is entirely his own.