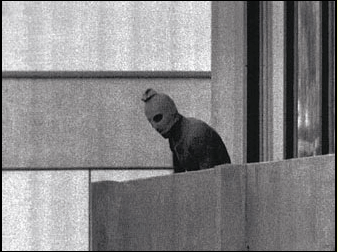 Each night, people all over the world are enjoying the 2016 summer Olympics in Rio de Janeiro.  But for many in Israel, this is a time of mourning and remembrance of the 1972 summer Olympics in Munich, in which eleven members of the Israeli Olympic team were brutally murdered by Palestinian Islamic terrorists.

It began at 5 a.m. on September 5, 1972, when Palestinian terrorists used fake credentials to enter the Olympic Village.  With stolen keys, they entered the apartments used by the Israeli team.  Several brave Israelis tried to fight the terrorists, allowing a few of their team members to escape.  After killing two Israelis, the Islamists rounded up the remaining 9 and held them hostage.  They told the press they were Palestinians and demanded that Israel release 200 Arab prisoners and give them safe passage out of Germany.

During negations it was learned that the terrorists belonged to a PLO faction called Black September.  Plans were made to helicopter the terrorists and their Israeli hostages to a NATO air base at Firstenfeldbruck where they would then fly via airplane to Cairo. Unfortunately, during the course of the transfer the Germans learned there were 8 terrorist instead of the 5 they were briefed on, so they were unprepared in their mission.  A bloody gun fight took place when the Germans attempted to kill the terrorists.

At 11 p.m. the media was mistakenly informed that the hostages were safe; the news was announced to a relieved Israeli public. But hour later a new fire fight broke out and one of the helicopters that held the Israelis was blown up by a terrorist’s grenade.   The remaining 9 Israeli hostages in the second helicopter were shot by the terrorists. 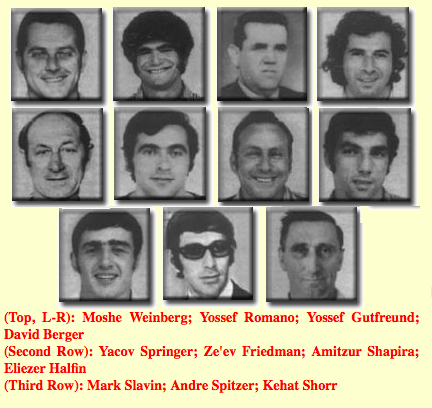 We just got the final word … you know, when I was a kid, my father used to say “Our greatest hopes and our worst fears are seldom realized.” Our worst fears have been realized tonight. They’ve now said that there were eleven hostages. Two were killed in their rooms yesterday morning, nine were killed at the airport tonight. They’re all gone.

In July 2012 it was discovered that Germany had been warned about possible a possible Palestinian terror attack but they no action to secure the Olympic village.

Today, during the 2016 Rio de Janeiro summer Olympics, radical Islam is at an all-time high.  One way Rio and rest of Europe can help prevent Islamic terrorism is to stop condemning Israel and instead work with her.  They need to realize we are all on the same team against radical Islam. This week alone, Israel has prevented several terror attacks at checkpoints including at the light rail in Jerusalem. MK Ayelet Shaked, from the Jewish Home Party, couldn’t have said it better about Israel: “We’re at the tip of the spear in terrorism.”

As for Europe and the West, the enemy is always adapting and changing and it is time we do the same. Follow Israel’s techniques and end political correctness. Profile if you have to. Maybe it will upset the moderate Muslims enough to join the world in a fight against terror. We can’t forget what happened in Munich of 1972; if we do, it will definitely happen again.

What If God Ran For President?

Daniel Greenfield: Moderates and Radicals in Islam and the Left