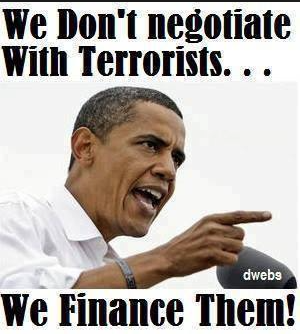 The Obama administration arranged for $400 million in cash, euros, Swiss francs, and other currencies from the central banks of the Netherlands and Switzerland to be secretly airlifted into Iran on an unmarked cargo plane-coincidently timed to arrive as four American hostages were released in January, the WSJ is reporting. The money was paid in foreign currency to avoid breaking sanctions against cash transfers deemed illegal under U.S. law. U.S. and European officials have confirmed that they were made aware of the secretly organized transfer-after the fact. According to reports, the Obama administration had negotiated a settlement in a failed arms deal of $1.7 billion-with the January transfer of cash as the initial payment. The payment also coincided on the same weekend that formal implementation of the nuclear agreement between Tehran, the U.S., and other global powers took place.

The successful negotiations to free our hostages was supposed to be a diplomatic coup for Secretary of State John Kerry who, at the time, declared “the importance of the relationships forged and the diplomatic channels unlocked over the course of the nuclear talks”.

U.S. officials are denying any correlation between the payment and prisoner exchange. However, Sen. Tom Cotton of Arkansas has accused President Barack Obama of paying “a $1.7 billion ransom to the ayatollahs for U.S. hostages…

“This break with longstanding U.S. policy put a price on the head of Americans, and has led Iran to continue its illegal seizures of Americans”, he said.

Since the cash shipment, two more Iranian-Americans have been arrested by the Revolutionary Guard.

NSA Whistleblower: Agency Has All of Clinton’s Deleted Emails