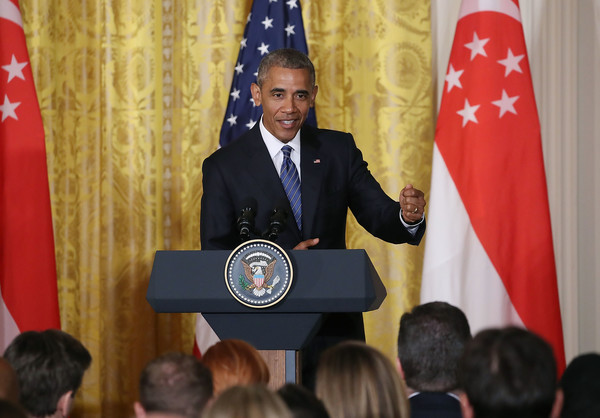 President Obama escalated his attacks of Donald Trump on Tuesday, declaring the GOP presidential candidate “unfit to serve” for office while calling on fellow Republican leaders to withdraw their backing of his candidacy.

“Yes, I think the Republican nominee is unfit to serve as president,” President Obama said at a White House news conference with the Prime Minister of Singapore. “I said so last week, and he keeps on proving it.”

Obama went on to explain Trump’s recent comment ongoing feud with the Khan family, the parents of slain U.S. soldier who attacked the GOP candidate at the Democratic National Convention last week demonstrates Trump is “woefully unprepared to do this job.” The ongoing feud between the Khan family and Trump began last week at the DNC when Khizr Khan, the father of the fallen American soldier, Army Capt. Humayun Khan, criticized the GOP candidate proposed ban of Muslims would have barred his son from entering the United States, adding Trump had “sacrificed nothing.”

Trump defended himself in a rebuttal, stated he was “viciously attacked” at the DNC stage and suggested the wife of Khizr, Ghazala “might not have been allowed to speak,” implying her silence reflected traditional Muslims restriction placed on women.

“The notion that he would attack a Gold Star family that had made such extraordinary sacrifices on behalf of our country, the fact that he doesn’t appear to have basic knowledge around critical issues in Europe, the Middle East, Asia means that he is woefully unprepared to do this job,” Obama said.

Since then, certain Republican leaders have issued lengthy statement that sharply criticized Trump’s comments. However, many calling out Trump’s remark stated the controversy would probably not cause them to withdraw their endorsements. Obama, in putting his two sense to the GOP drama, stated he doesn’t doubt the GOP leaders such as House Speakers Paul Ryan, Senate Majority leader Mitch McConnell and Senator John McCain were outraged by Trump’s remarks, but question why would they continue to support a candidate who “doesn’t have the judgment, the temperament, or the understanding to occupy the most powerful position in the world.”

“The question I think they have to ask themselves is, if you are repeatedly having to say in very strong terms that what he has said is unacceptable, why are you still endorsing him?” Obama said. “What does this say about your party that this is your standard-bearer? This isn’t a situation where you have an episodic gaffe. This is daily and weekly, where they are distancing themselves from statements he is making.”

The Trump campaign responded back to Obama’s remark as well as going after the Democratic nominee Hillary Clinton.

“Obama-Clinton have single-handedly destabilized the Middle East, handed Iraq, Libya and Syria to ISIS, and allowed our personnel to be slaughtered at Benghazi. Then they put Iran on the path to nuclear weapons. Then they allowed dozens of veterans to die waiting for medical care that never came. Hillary Clinton put the whole country at risk with her illegal email server, deleted evidence of her crime, and lied repeatedly about her conduct which endangered us all. They released criminal aliens into our country who killed one innocent American after another — like Sarah Root and Kate Steinle — and have repeatedly admitted migrants later implicated in terrorism. They have produced the worst recovery since the Great Depression. They have shipped millions of our best jobs overseas to appease their global special interests. They have betrayed our security and our workers, and Hillary Clinton has proven herself unfit to serve in any government office.

She is reckless with her emails, reckless with regime change, and reckless with American lives. Our nation has been humiliated abroad and compromised by radical Islam brought onto our shores. We need change now.”

Later on, Trump took to Twitter to add that President Obama is “a terrible president” that will go down in history as “the worst president.”

President Obama will go down as perhaps the worst president in the history of the United States!

Benghazi: A Tale of Two Reports