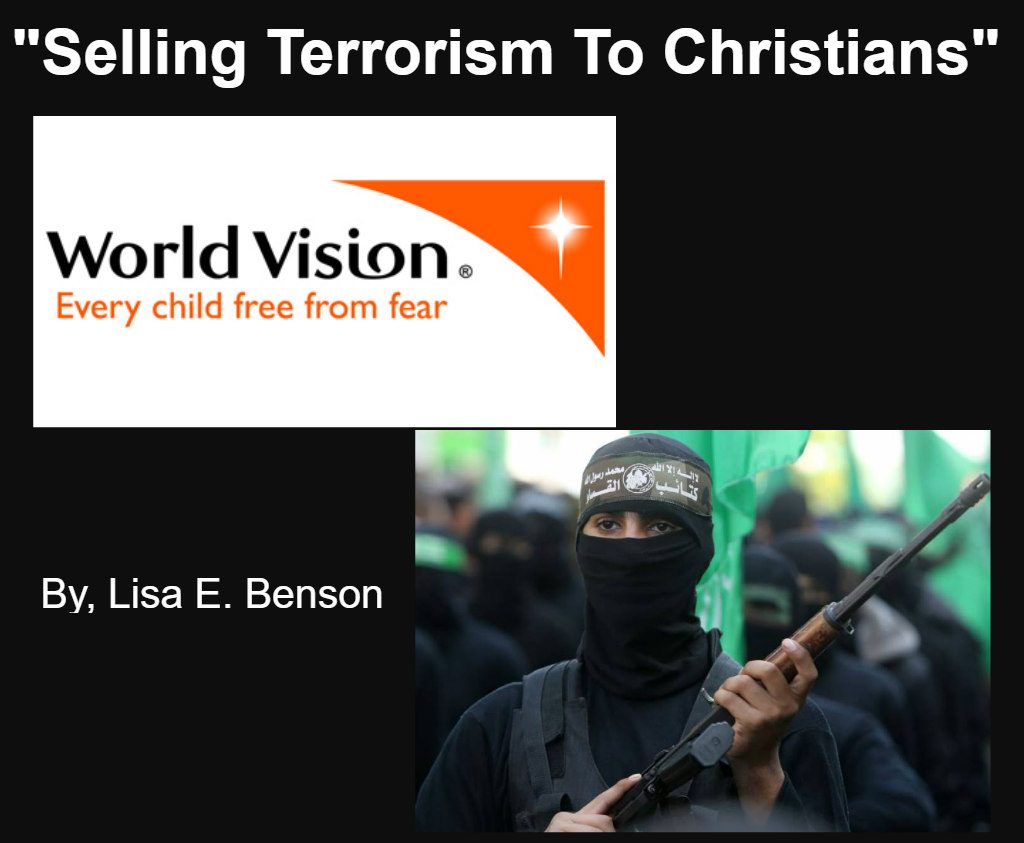 Raising Money From Christians For the Explicit Purpose of Killing Jews

The announcement last week by Israeli authorities that a top manager for the highly regarded Christian charity, World Vision International, had been charged with funneling aid money to the terrorist group HAMAS, was not a surprise to Israelis.   In fact, there is an organization in Israel, NGO Monitor, a watchdog group that documents non- Israeli organizations working in Israel to ensure that charitable organizations are transparent, exhibit accountability, and have clear detailed lines of control.

World Vision and Save The Children, along with other international charities have been on the radar for some time.

The Formula To Raise Billions of Dollars From Christians

You see, Israel pulls at the heartstrings – the epicenter of conflict and chaos, the home of 80 different cultures and a myriad of religions – it provides the perfect backdrop to fundraise using the elements of emotion, urgency, religion, and fear. Christians see the prophecies being fulfilled; The Second Coming of the Lord is on HIS way and to prepare for the Kingdom, God’s children have obligations to humankind that must be fulfilled.

It is the formula that successful Evangelicals have used to raise billions of dollars for their Christian enterprises.

My colleague, Dr. Gerald Steinberg, President of NGO Monitor, has been warning of fundraising abuse on the backs of Israel for years. In the August 11, 2016 “Wall Street Journal,” Dr. Steinberg wrote, “World Vision officials have professed to be shocked by the arrest in Israel of Mohammed El – Halabi, the head of the mega charity’s Gaza operations.” Dr. Steinberg goes on to say:

There was no accountability to World Vision International from the manager of the GAZA operation?

HAMAS was formed in 1987 at the beginning of the first Palestinian Intifada (uprising). Its roots are in the Palestinian branch of the Muslim Brotherhood and designated a terrorist organization by the U.S. State Department in 1997.

HAMAS has a military wing known as the Izz al-Din al-Qassam Brigade that has conducted many attacks on Israel.

In the United States, the Holy Land Foundation Trial (HLF) was the largest Islamic charity in the United States. In December of 2001, the U.S. government designated HLF a terrorist organization, closed it down and seized its assets.   The 2008 trial of HLF found that it was the largest terrorism financing prosecution in American history — more than $12 million was raised in the United States for Hamas. The Council for American Islamic Relations, known as CAIR, was identified in the case as the “unindicted co-conspirators” of the Hamas financing.

The nexus of HAMAS in the United States is considered to be in the operations of CAIR and in every city in America. In social justice circles, CAIR is (wrongly) considered to be the flagship of protecting the Muslim Brotherhood as the “moderate” wing of Islam.

In the bastions of liberal minded churches, and some fundamentalist Evangelical churches as well, fundraising for projects in worn-torn Arab conflict zones, are narrating , from the pulpit, “Replacement Theology” – the Christian theological view that teaches that the church has replaced Israel in God’s plan. Replacement Theology preaching raises cash – lots of cash.   Lamb & Lion Ministries states on their website, “At the root of Replacement Theology is Satan’s hatred of the Jewish people.” That equals what is believed to be approximately 100,000 Americans hating Jews and Israel enough to denounce the scriptures.

The Churches of World Vision International

World Vision International, founded in 1950, is registered as a 501(c)(3) religious non-profit corporation under the laws of the State of California as described on CharityNavigator.org.   There are nearly 45,000 employees with revenue raised in churches (worldwide) of $2.79 billion. The World Vision United States also founded in 1950 has revenue of $1.6 billion.

In a letter to this author, dated August 16, 2016, World Vision asserts that they are partnered with more than 12,000 U.S. churches to “bridge the gap between their communities and communities in need around the globe.”

Dexter Van Zile, Christian Media Analyst for Committee for Accuracy in Middle East (CAMERA) reports on Lisa Benson Radio Show, “World Vision sells a story to its congregants/followers of hostility toward Israel.” Funding enemies of Israel to invoke harm on the Jewish state. 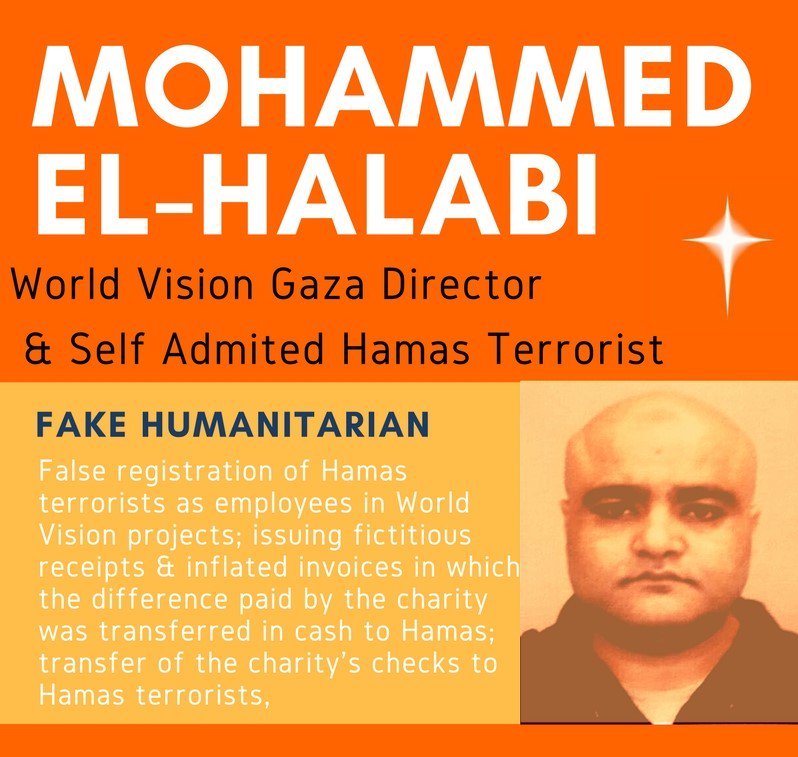 How Did Mohammad El-Halabi Organize A Five-Year-Long Fraud Operation with World Vision Funneling Money To Hamas?

“World Vision International used to file tax documents as any 501(c)(3) organization, but in 2007, it declared itself a church, and as such, is no longer required to submit its financials to the IRS.”

So there you have it! World Vision is filing as a church and per IRS need not provide the standard Form 990 used by all U.S. nonprofits.

There is a lack of accountability on the part of World Vision — raising billions of dollars from Christians around the world — using the suffering children of worn-torn Gaza as the emotional hook to raise money from Anti-Semitic, and Anti- Israel Christians fostering a Replacement Theology perspective.

The Palestinian people have become PAWNS in an ongoing campaign to delegitimize the Jewish State.

Prime Minister of Israel, Benjamin Netanyahu stated, regarding the World Vision fraud, “Israel cares more about the Palestinians than their own leaders do.”

That is precisely correct. The investigation into the funneling of World Vision money to HAMAS has exposed the truth that NOT ONE CHRISTIAN ARAB CHILD WAS PROVIDED CARE BY WORLD VISION.

Tens of millions of dollars was siphoned off from money sent to World Vision GAZA and was used to pay HAMAS terrorist militants, purchase weapons, dig terror tunnels and construct military installations for HAMAS, investigators said.

American Christians BEWARE!   Know that there is ZERO transparency for World Vision whose website states as its mission, “global Christian relief, development and advocacy.”

The only advocacy went to a terrorist organization and none to children who are impoverished.

In 2007, seven key leaders of an Islamic charity known as the Holy Land Foundation for Relief and Development (HLF) went to trial, and subsequently to jail, for charges that they had provided “material support” to a foreign terrorist organization (HAMAS), had engaged in money fraud ($12 million), and had breached International Emergency Economic Power Act, which prohibits transactions that threaten American national security.

Similarly, World Vision International should be put on trial in the United States for threatening U.S. interests in the Middle East.

At the very least, all United States government funding must stop to World Vision which currently equals $ 194 million in U.S. granting to World Vision and IRS rules must change to demand accountability and in-depth accounting disclosure from church entities (990’s).

More to come as the Israel trial of Mohammad El-Halabi begins.

Lisa has been involved in the security of Israel and the development of Israeli institutions for nearly 30-years. Working for scientific research centers, security policy centers, and universities in Israel, Lisa became known as one of the nation's foremost development advisors to Israel. Weeks after the 9-11 attack on America, The Investigative Project, called on Lisa to organize financing and awareness networks to counter the Islamic threat on America. That began her career as a recognized investigator and analyst. Lisa went on to do assessments in the Ukraine, Former Soviet Union and then on to work on behalf of the Jewish Federation and many of the top D.C. Policy Centers and Think Tanks working on counter-terrorism and foreign policy. Lisa is the host a highly regarded radio broadcast, The Lisa Benson Radio Show for National Security Matters on Salem Media, KKNT 960 The Patriot, Phoenix. She is heard around the nation every Sunday afternoon, and in Israel. Lisa has an undergraduate degree in archeology, Latin, and art history from the State University of New York, Albany. Her post graduate education was in public policy at the Rockefeller College of Public Policy at the State University of New York at Albany. Lisa is quick to say that a career in national security found her; but she will also say that it was her father, a concentration camp Liberator, chronicled in the United States Holocaust Museum, who motivates her every day, in spirit. He was among the first battalions of U.S. Army soldiers to liberate the Ohrdruff in April, 1945, the first concentration seen by American soldiers. Radio Talk Show Host ~ National Security Analyst, Commentator and Public Speaker www.LisaBensonRadioShow.com President: The Queen Esther Project www.TheQueenEstherProject.org Founder: The National Security Task Force of America

MUST READ Book: "Rotten to the (Common) Core"