Burgess Owens, an NFL Super Bowl Champion, successful entrepreneur, black conservative and author of the new book, LIBERALISM: Or How to Turn Good Men into Whiners, Weenies and Wimps (Post Hill Press, 2016) responded to the recent comments made by San Francisco 49er quarterback Colin Kaepernick on why he refused to stand for the National Anthem during a recent game.

“This is a timely example of the crossroad that our nation has reached,” says Owens. “With our increasing racial divide, it is NOT though a racial crisis we facing but instead it is a crisis of ideology. If all ideologues really cared about Black lives it would not be an issue only discussed before national elections. There is an ideology that divides us and one that unites us. We must decide if we will continue down the pathway of Socialist, Marxism and atheism that thrives on division or if we will return to our American way…one based on Judeo Christian values, free enterprise and recognition of a meritocracy truth, that content and character are color blind.

“We now have a multi-million dollar athlete who has not been taught the proud history of our nation and who is totally unaware of the millions of his Patriotic Black ancestors who worked, lived and died to give him the privilege of becoming wealthy by running and throwing a football. It is a privil 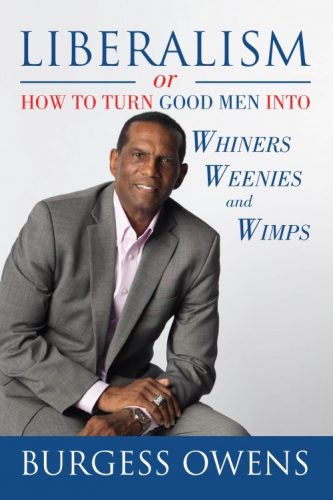 eged BTW that he would not have had, as a Black QB, if he had played in the early 70’s when I entered the NFL.  We now see firsthand the ideology of division becoming more prevalent in urban America….It is one of ungratefulness and anger that is turning my proud race into unapologetic…Black Racist.

I too enjoy those same freedoms and will instead stand up to those who, through brainwashing and ignorance, demean our American Way.  I will stand for my dad, Uncles and the 125,000 Black veterans who fought on foreign soil in WW11 to give him the right to be ignorant. I stand for the thousands of young Black Tuskegee Airmen, for the All-Black 54th Mass. Voluntary infantry in Civil War and the first martyr to die for our nations freedom, an ex-Slave and Black Free man, Crispus Attucks.

I will use my free voice and free market options to boycott this wealthy young man in every arena in which he competes and with any product that he endorses. I will encourage every proud American, Black and White, to do the same. The consequence of ingratitude for blessing……is less blessing. My advice to this young man and any other Black athlete who seek the attainment of Dreams that this country allows and then denigrates the American People who made it possible..… Stop watching the (white owned) anti-White, anti-police , anti-American BET (Black Entertainment TV) channel!”