“Eighty and six years have I served Christ, nor has He ever done me any harm. How, then, could I blaspheme my King who saved Me?….I bless Thee for deigning me worthy of this day and this hour that I may be among Thy martyrs and drink the cup of my Lord Jesus Christ.” ~ Polycarp

The U.S. State Department recently came out with their International Religious Freedom Report for 2015, which highlighted persecutio 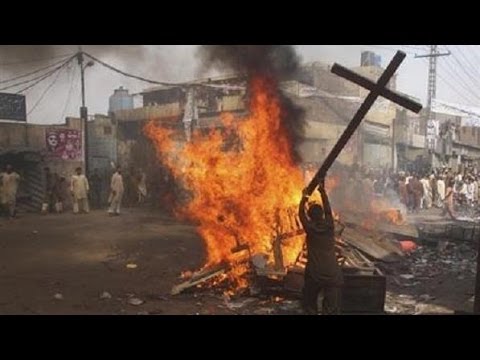 n of religious minorities around the world.

While recent stories on mainly internet based information sites have reported about Communist China’s latest attempt to suppress the Christian underground church,  the sentencing of an Algerian Christian man of five years in prison after posting a simple praise of Jesus on his Facebook  which is considered blaspheme in the Muslim nation, and 13 Christians murdered in Nigeria by Muslim Fulani herdsmen,  it’s understandable that the mainstream media ignores these kinds of stories while focusing on larger groups such as Boko Haram and ISIS among other groups who are committing genocide and other atrocities against Christians and other religious minority believers.

Oh wait- no they’re not.

Actually the U.S. mainstream media is ignoring those stories as well. According to Media Research Center, the U.S. Networks are ignoring even the State Department’s report.   MRC published a letter the same day the State Department released their report, imploring media to start doing their jobs and report on the threat of eradication of Christianity in the Middle East.

According to MRC, Between April 2014 and March 2016, the network evening news shows referred to persecution against Christians in the Middle East, Africa, and South Asia 60 times, and during only six of those reports the word “genocide “was used.  And when genocide was mentioned, the networks tended to lump Christians in with the Yazidis and Shia Muslims as victims.  Compare those numbers to a search on MSNBC about Islamophobia in the US and there were 29 stories in 2015 alone.

MRC points out that network stories have told of hundreds of thousands of Christians “on the run,” mass graves, and “convert or die” ultimatums, yet genocide is never or rarely mentioned.

I’ve been aware of Christian persecution worldwide for about 15 years through organizations such as The Voice of the Martyrs and Open Doors USA.  Every year they report through their world watch lists which rate nations on treatment of Christian believers.   Different mission organizations from around the world have reported that more than 7,000 Christians have been murdered just within the last year. These figures don’t really include Iraq, Syria, or North Korea because accurate numbers are hard to come by.

According to Open Doors, North Korea has been named the most dangerous place in the world to be a Christian for the 14th year running, with an estimated 70,000 Christians currently in prison or labor camps because of their faith.

Iraq has replaced Somalia as the second most dangerous place to be a Christian. The Christian population or Iraq has been decimated from two million in 2003 to less than 200,000 today.

Eritrea is close behind at number three.

Afghanistan, Syria and Pakistan are close behind at numbers 4, 5 and 6 as the most difficult places for Christians. In the predominately Muslim Pakistan, Asia Bibi and Imran Ghafur are Christians facing life imprisonment for supposed crimes against Islam.  In July 2015, the Pakistani Supreme Court overturned Asia’s death sentence and ordered a thorough review of the evidence. Currently, there has been no change in the status of her case.

Somalia, Sudan, Iran, and Libya make up the final four of the top ten countries in that order.

From the rest of the countries, the lowest ranking country in 2013, Niger, had 35 points. This year’s lowest ranking country, Oman, had 53 points, still an increase of more than 50 percent.  India, the second most populous country in the world, has seen persecution levels rise dramatically for the third straight year, rising to number 17 from a ranking of 31 in 2013.

Lisa Pearce, CEO of Open Doors UK & Ireland, said in a recent interview “This is a cause of great concern. Many countries have dropped down the list, not because persecution there is decreasing, but simply because others are getting worse faster… The persecution of Christians is getting worse, in every region in which we work – and it’s getting worse fast. In many parts of the world, despite the pressure and the often terrible cost, the church continues to grow. There is always hope, and yet we are in unmarked territory – the pace and scale of persecution of Christians is unprecedented and growing fast.”

Gatestone Institute recently reported about the situation in Nigeria which is reaching critical with an estimated 50,000 children facing death by starvation, according to Western aid officials.

One official explained, “Nigeria’s Muslim President Muhammadu Buhari is diverting vital resources away from the campaign to pursue his own political agenda… The Nigerian government, which is receiving significant amounts of foreign aid, needs to understand that its main priority is to deal with Boko Haram, and also to make sure that Nigeria does not suffer the worst humanitarian disaster in its history.”

This is the same Buhari which Obama and Secretary of State John Kerry actively supported in Nigeria’s elections and who Kerry has met with Buhari administration officials on numerous occasions to praise efforts in fighting against Boko Haram as recently as the end of March of this year. According to Stratfor, nearly eighty appointments President Buhari has made since his administration began in May last year have gone to northerners, increasing ethnic tensions with the predominantly Christian south of the country.

Back in May, I wrote about the World turning away from Christian Persecution, pointing out that with all of the worldwide  foundations, think tanks, humanitarian groups and the UN, there is more abuse, atrocities and genocide going on than ever before- yet they are largely ignored because simply put, Christians don’t fit in with the progressive agenda.

However hard they try to ignore it however, for those Christians in a world where everyday lives means threats of jail, beatings, death or worse, their faith and witness through it is a growing testimony to the power and Truth of Christ.  The persecuted church in many countries is growing stronger and Christians are living out the Apostle Paul’s testimony that God’s “grace is sufficient for thee: for my strength is made perfect in weakness. Most gladly therefore will I rather glory in my infirmities, that the power of Christ may rest upon me.”

God bless them through it all, and please keep them in your prayers.

Top 10 Best and Worst Places to Retire in the U.S. (You May Be Surprised)