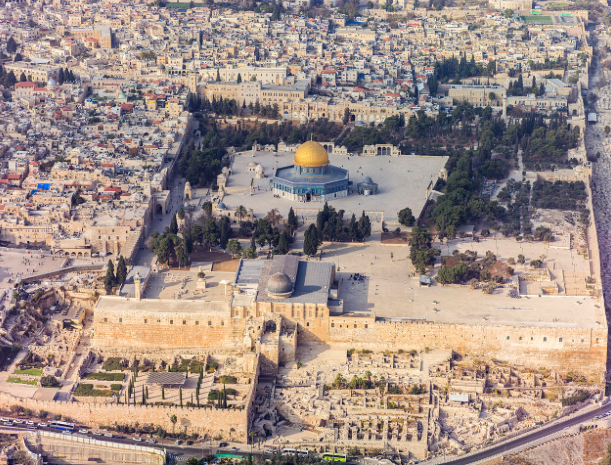 MK Rabbi Yehuda Glick is a well-known Temple Mount activist here in Israel. Rabbi Glick supports the Jewish right to the Temple Mount because ultimately it belongs to the Jewish people.  Recently I had the honor of attending a lecture by Rabbi Glick and learned about his righteous cause. His lecture couldn’t have come at a better time in the Hebrew calendar, as this is the time of mourning of the destruction of the Holy Temples.

The Temple Mount is the holiest site in Judaism. It represents a vast history for the nation of Israel going way back to the Garden of Eden, and with Abraham’s willingness to sacrifice his son, Isaac, to God. It is the site of the first two Holy Temples built by King Solomon and King Herod, and it is the site of the future third Holy Temple, which will be built by the Jewish people and the Moshiach (Messiah).

According to Rabbi Glick, the special part of building the third Temple, which will bring about the Moshiach and redemption of humanity, is that it will be a dwelling home for God. In Judaism, the center of the Earth is the Temple Mount site. The Western Wall, or Kotel, is also a powerful spiritual place but as important as it is, the Kotel is merely the outside wall of the 2nd Holy Temple.

In Judaism there are different theories how the 3rd Temple will come about. One theory is that the nation of Israel will build the Temple. The second is that the Moshiach will build it, and lastly, my favorite, is that God Himself will bring the Temple Mount from Heaven. I personally believe it will be a combination of all 3 theories. It is written that when this happens, every person will know God. There will be peace and every day will be a Sabbath day.

Unfortunately the United Nations, as well as the UNESCO and UNHRC, want to rewrite Jewish history. They want to force an Arab Spring-type agenda on the Jewish State of Israel by using both their influence and their manipulation, trying to make the world believe that the Temple Mount belongs to the Muslims. This is flat out wrong. Currently the Jordanian Islamic Waqf occupies the area. After the 6-Day War in 1967, Israel reclaimed the Temple Mount. To avoid further conflict with the surrounding Arab nations, Israel was essentially tricked into making a deal with Jordan that would supposedly allow Jewish people to pray freely at the Temple Mount site. Obviously that is not the case today.   There are limited times in which Jews are allowed to pray at all, and they are restricted from praying out loud.

Rabbi 21 is encouraging and inspiring Jews to ascend to the Temple Mount. While fighting for the 3rd Temple, the Rabbi was the subject of an assassination attempt by an Arab Muslim. That proves how important his cause is.

Rabbi Glick believes that it will take us, the Nation of Israel, to follow God’s commandments in taking action to build the 3rd Temple. I support this cause and will start on a regular basis to ascend to the Temple Mount.