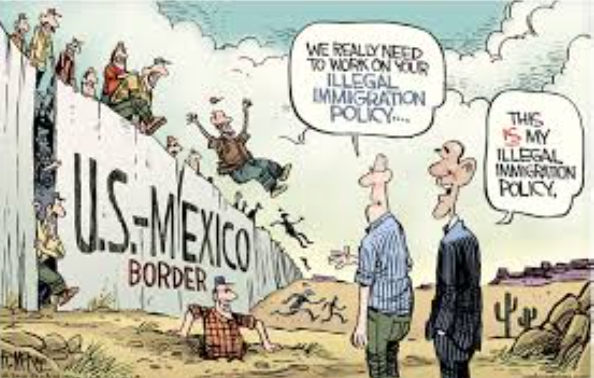 As a practicing California attorney and legal immigrant to the United States, I am well aware of the nuances in immigration law and hurdles that those who want to “do the right thing” and come here face. However, the fact that over 1 million legal immigrants are naturalized each year is a testimony to the soundness of our legal system and the fact that none of these hurdles is insurmountable.

There is a myriad of visas to choose from and possibilities are virtually limitless. Let us not forget that there is seasonal demand in our industry for wage laborers and many people do not wish to abandon their roots but simply come here for economic reasons. That should not automatically entitle them to a path to citizenship or give them voting and other rights.

Interestingly, “self-deportation” is necessary for all immigrants. I myself (after two stages of visa extension and modification) was forced to travel back to Europe, in order to request permanent residency. I recall asking my attorney at the time if I would be allowed back into the United States. He could not say for sure. I simply had to take the risk, which was not insignificant, that I would not be granted re-entry – even though I had produced all the requisite affidavits, diplomas, certificates, University professors’ and former employers’ recommendations, and even though I had an employment position and sponsor in the United States.

What is more, arriving in the United States by plane is not as simple as it sounds. Everyone without the U.S. passport and citizenship is “lined up” for a different entry and closely scrutinized. When I was arriving here for the first time, I was held up at the airport for 6 hours, my two trunks were turned inside out and the more I sweated, the more questions the 5 uniformed “yuge” African-American customs officers fired at me. Naturally, coming from a former socialist police state where police had unlimited powers, having been jailed by the KGB… well, the shock was almost more than I could bear. No! I would bite my tongue, force a smile, try to be as polite as I could – I grew up with America in my heart, surviving only with that one thought: that one day I would live in the Land of the Brave, the Home of the Free… nothing and no-one could stop me from coming to where I belong! Those midnight hours on end with a banned textbook of English learning forbidden language in the country of envy and hate-filled socialists bore fruit, for had I not been able to answer all those questions, I doubt I would be here now.

To say that our country is a “nation of immigrants” is not the same as saying that our country is a “nation of illegals” where anyone can come and is free to do what they want – burn our flag, vote without understanding our Constitution, accept social security and medical care without working or even speaking English. Please allow me to reiterate – from my own personal experience – what everyone who wants to “do the right thing” and come here legally must show prior to applying for the Green Card: 1) a proof of employment and employer’s affidavit (the employer must have advertised the given position for at least 5 weeks to make it available to U.S. citizens first – only if no U.S. citizen was interested may the employer accept the non-citizen employee), 2) a sponsor (an American citizen who will vouchsafe for the new “applicant-citizen” that they will not be a burden on the taxpayer and our legal system), 3) proof of health (where every new permanent resident is stripped, examined for any contagious diseases and possible drug use), 4) self-sufficiency in other respects (mainly that they have where to live).

On top of these requirements, prior to applying for naturalization, the new prospective citizen must show allegiance to the United States (prior to my requesting Citizenship, I was not allowed to leave the country for four years – not that I would even want to, hard as it was to get here in the first place!) and that they are acquainted with our culture and speak our language. The two latter requirements are part of the “Naturalization Test,” which is very simple and a far cry from what it should be in order to really make new citizens appreciate our values. In particular, as to the English language, all that this “test” consists of are 3 simple sentences which the applicant is required to read and understand. I am not sure if I was treated differently because I hold an MA in English and Ph.D. in American Literature, but the INS agent was over “testing me” as soon as I read one of the sentences. Like our borders, our language is the cornerstone of our country and we all should be proud of it and speak and write only polished, beautiful English – and insist that everyone else does likewise!

If someone says that our country is a nation of immigrants, they must also say: immigrants who came here legally. Ellis Island immigration records date back to 1855. From 1892 to 1953, thousands of people were sent back to Europe based on the following criteria: 1) extreme poverty, 2) sickness, mental or physical weakness, 3) criminal record, and 4) religious bigotry or intolerance! That is what made us strong: the selection of the strongest, toughest, hard-working people who mean good and commit no evil. Why should we change our policy and laws to suit anyone who does not meet these criteria today?!