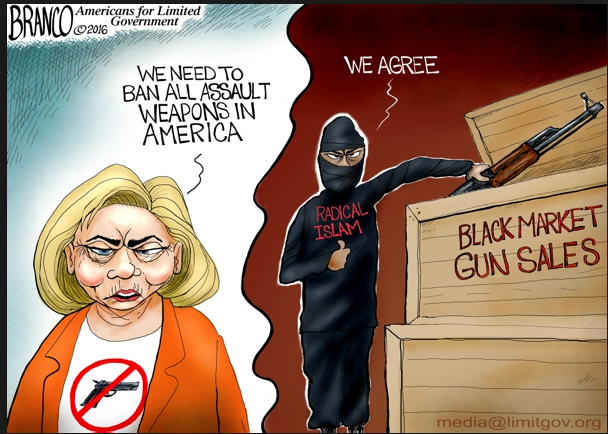 If Hillary Clinton wins the presidency, it is likely that your Second Amendment rights will mean nothing. The constitutional protections we have depended on for years have failed when the liberals control a court; and it is likely that Hillary will redefine all courts.

The liberals’ successful record of civil asset forfeitures provides a fine example of how they can get around the constitutional protections provided by the Fifth and Second Amendments. In many civil asset forfeiture cases, the citizen has not been found guilty of any crime, but the government swoops in to seize—pardon me, to force the forfeiture of—their property and cash. This is a civil act on the part of government, not a criminal action. So, fighting their legal teams and sympathetic judges is horribly expensive and often useless.

From the liberal successes we can predict how a Hillary government will use legalities and mutant judgements to seize your firearms, along with your ammunition without touching the Second Amendment. The stage is already set. A search of proposals in Congress shows that there are over 2,000 filings with “gun” & “control” in their bodies.  Over two thousand! Each has a new angle on how to restrict gun purchases and possession, all in the name of protection and safety—and it’s getting worse.

On June 27, 2016 the Supreme Court of the United States ruled in Voisine & Armstrong v. United States, that persons who are convicted of misdemeanor assault may be prohibited by law from possessing a firearm—a misdemeanor! In reading the opinion of Justice Kagan, I was struck by the energy of this ruling. It makes no difference between a person intentionally harming another or a person accidentally causing harm in a domestic dispute. It blurs the distinction between actual and attempted use of physical force; it even includes “offensive touching” as a crime.

Bottom line: This ruling has made it far easier for government to confiscate firearms and ammunition.

The Second Amendment’s clause “shall not be infringed” has meant little to the courts for decades. Now it means almost nothing, because under the right circumstances—such as angering a liberal—touching a person can cause you to lose your Second Amendment rights! The wild rulings have erected a new playground for spirited attorneys and their clients to obtain large settlements and revocations of our constitutional rights, despite our Constitution’s “protections.”

Let’s get back to Hillary Clinton. Her coded speech is interesting. When she stated that she will not repeal the Second Amendment, we should take that as a warning that she will control firearms in another way. It is assured that Hillary and company will employ the liberal tactic of the manipulation and mutation of law to make a repeal unnecessary. Once they set up a corrupted justice system they can use the courts and their attorneys to portray any person who desires a certain type of gun, or more than fifty rounds of ammunition, as a dangerous person. From that point you will see the firearms forfeiture process take wing.

There is a possibility that a massive seizure of firearms may leave the civil arena. The conservative’s straight-line, constitutional thinking has been continuously out-litigated by the liberals’ creative, far-fetched thinking and mutations of justice. So, in the liberals’ next creative application of law, it is reasonable to expect them to use a phrase from the Constitution which gives incredible powers to the government: “the public Safety may require it.”

These words are from Article I, Section 9 of the Constitution, which gives Congress, under certain circumstances, the power to suspend the writ of habeas corpus. Why should gun control be any different when the public safety may require the new restrictions? If you read the pages of resolutions before Congress, you will see that the “whereas” sections are packed with statistics and examples of how dangerous guns are. The liberals see public safety as a tool to solve the gun problem.

Don’t take the gun grab with indifference. During the Republican Convention, former Navy Seal Marcus Luttrell said “Your war is here! You don’t have to find it!” This war is to keep our nation from losing to two enemies: Islam and Liberalism. We have to get serious about this election. The armchair warriors with their “Molon Labe” bumper stickers are good talk, but they’re just talk. We have to do everything we can to stop Hillary Clinton from winning the presidency. Our republican form of government cannot survive a shot from a Hillary presidency.

I will end this with a note from a great founding father, Samuel Adams:

“The liberties of our country, the freedoms of our civil Constitution are worth defending at all hazards; it is our duty to defend them against all attacks. We have received them as a fair inheritance from our worthy ancestors. They purchased them for us with toil and danger and expense of treasure and blood. It will bring a mark of everlasting infamy on the present generation – enlightened as it is – if we should suffer them to be wrested from us by violence without a struggle, or to be cheated out of them by the artifices of designing men.”

When our nation’s future is at stake, I advise our patriots to vote with that in mind.