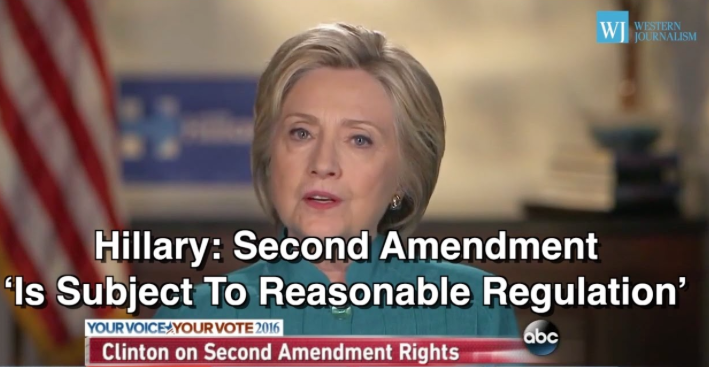 Many have commented on Hillary Clinton’s appearance on the Fox Sunday News show with Chris Wallace in which she blatantly denied that FBI Director James Comey determined she had lied about her private emails. She stated, “Director Comey said my answers were truthful, and what I’ve said is consistent with what I’ve told the America people.” Even when presented with the video of Comey’s comments during a congressional hearing she denied she lied. She also doubled down and called the family members of the Benghazi heroes liars. She denied that she had blamed their deaths on a video and said, with feigned sympathy, that she understands how people can “misremember” things during moments of grief and emotion. Hillary Clinton is a pathological liar of the cruelest kind.

What the media failed to report were her comments to Chris Wallace regarding the Constitution and our Second Amendment right to keep and bear arms. Not only did she say we need to come together to pass “reasonable” gun control, she told Wallace she believed ALL OF OUR RIGHTS (writers bold), not just our Second Amendment right, but “EVERY RIGHT THAT WE HAVE (writers bold) is open to and even subject to reasonable regulations.” One can only imagine what the IRS under a Clinton presidency would do to stifle the free speech of conservative organizations and individuals. We learned from this interview that a President Clinton would bring more government regulations and programs driving more small companies out of business. She promised a stimulus bill larger than the one President Obama passed, throwing more money into private corporations and public-private partnerships to advance a renewable energy agenda. She believes President Obama failed to spend enough money to turn our economy around. And we all know the world has become a more unstable place during her tenure as Secretary of State.

As a woman I am ashamed the first woman nominated to run for president on a major party ticket is Hillary Clinton. Her nomination is not a proud moment in American history. She does not represent American women, she represents her own self-interest.