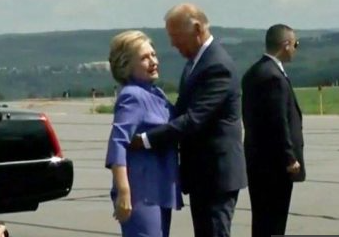 Over the centuries, the office of President of the United States of America has become one of worldwide importance. Our President is not only the head of our federal government, but is a position the countries around the globe have looked to for strength, sound decision making, allied leadership, a force for good against so much evil encroaching other nations. The workday is very long; at times it quite literally never ends. There is no “phoning it in” for this position and one undertakes the rigors with this understanding.

America was lucky that the disabilities of Franklin D. Roosevelt and John F. Kennedy did not cost this nation her liberty or sovereignty.  But are we to undertake the same gamble with Hillary Clinton, who may have a serious, disabling medical condition known only to her and her doctors?  The ramifications of this scenario could be very costly to We The People. Was it fair to hide Roosevelt’s lack of full function in order it might cost him votes? And with JFK, was it honorable to keep secret the type of drugs and the amount of usage in order to promote the “vital young man” his party wanted us to perceive, the same party which now wants to add yet another “first” regardless what danger may be lurking under the cloak of secrecy?

As someone who has personally experienced disability, I do not come to my opinions without personal knowledge and experience, nor do I base my conclusions solely on that. I understand firsthand neurological damage – and the similarities with Ms. Clinton are overwhelming.

My history of neurological damage began with a complication from a craniotomy surgery in 1986.  Subsequently I have had over three dozen operations over the course of twenty-five years, each one to correct some damage done by the last.

With Ms. Clinton, I see danger signs and I see them being hidden by a group of people who do not have the safety of America first and foremost in their minds.  Most especially Clinton herself, who seems to be putting her lifelong ambition of becoming the first woman President above the security of America and her citizens. Clinton has already demonstrated her carelessness with National Security, so is it really so much of a stretch to believe she will do anything in order to make it to November, then hide away till January 2017 for the historic swearing-in?

As for the what I have observed as warning signs, they began during her tenure as Secretary of State.  We were told Hillary Clinton had suffered a “bout of flu” that caused her to become so dehydrated that she fell and hit her head on something so hard it caused a blood clot that required hospitalization. We were then given sympathetic press accounts of how loving husband Bill was, staying in overnight vigil, and with daughter Chelsea never leaving her side. And we were told Ms. Clinton was being treated with anti-coagulants and blood thinners, among other medicines.  Mostly, there was a great flurry from Hillary’s spokespeople insisting that nothing more serious had occurred and she was recovering just fine.

Next, Hillary Clinton disappeared from public view for quite some time, only to emerge wearing spectacles instead of her usual contact lenses.  The lenses of Ms. Clinton’s new spectacles were covered with what’s known as Fresnel prisms, an optical aid used to correct the double vision of stroke victims. Over two years ago, I wrote a piece for Politichicks wherein I described the reason for those particular prisms because of my own need for a different type of prism in my spectacles lenses.  My conclusion, based on what my own neurosurgeons told me, was that Hillary Clinton’s concussion was not caused by a fall.  NBC’s resident physician, Robert Bazell, M.D., informed the country that the treatment Ms. Clinton underwent was “contraindicated”, more typical of one who had suffered a stroke, as was the use of the Fresnel prisms.

In learning of several tripping and/or falling incidents over the post-White House years of Hillary Clinton, while most who oppose her attempt to portray them in the light of a stumbling drunk, I do not see it as such. Nor do I believe her hacking, rough-whispered speaking voice is a “cough attack”, or the dry throat she continues to pretend is due to “too much talking”, followed by long drinks of water to convince people. (See PolitiChick Susan Swift’s video compilation of Ms. Clinton’s coughing HERE.)

The reason I do not believe this is simply a “cough” is because I have heard the sound of that voice and felt the non-stop cough in my own body.  It is caused by a spasm of my throat muscles, with muscles closing for no particular reason, caused by something that has stimulated the throat nerves resulting in the ensuing spasms.  Just as it appears to be with Ms. Clinton, my body reacts in a continuing cough in order for me to get much-needed air into my lungs until the spasm subsides.  Like Clinton’s, it is a dry cough and nothing comes up, and it does cause a hoarse, whispery speech until the vocal chords completely relax. I have had to explain this phenomenon time and time again, even to family and friends who are fully aware of my long history with neurological damage.  I have told them umpteen times: I am not choking so please do not thump me on the back (as that may cause my tongue to lodge in my throat and then I would be choking).  While my coughing spasms occur, my mind is alert, and were I to indeed be choking, I would give the recognized signal of putting my hands to my throat.

As Ann-Marie Murrell has pointed out, we have all seen the enormous physical changes, the toll taken on those who have held the office of the President.  How much worse would it be for one already in a weakened state, and with such a disability/infirmity as Ms. Clinton appears to have?  Would a potentially disabled president require others to run the Oval Office and govern with Clinton but a figurehead? This has happened before during the second Wilson presidential term.  What type of threats could be made on our country should Clinton repeat the situation much earlier in her presidency? I believe the voters of America are playing with fire by ignoring these episodes, or ignoring those facilitating the hiding of the them.