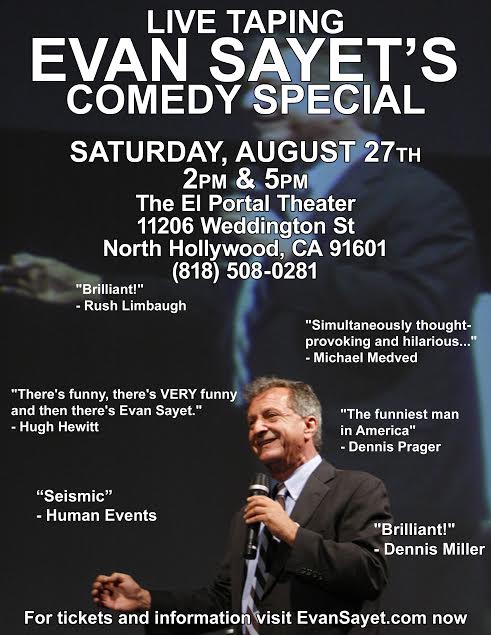 On August 27, author and comedian (and PolitiChicks friend) Evan Sayet will begin filming a groundbreaking comedy special–but with a conservative theme.  Evan, who once wrote for the Bill Maher show and many other mainstream television series, understands the need for more conservative-based entertainment.

If you live in California, we need you to come to the taping of several of his shows (which will be filmed for the movie).  As Evan writes on his website EvanSayet.com:

We always complain that there’s no conservative-themed entertainment out there in the mainstream. Well, THIS IS IT. This is a BIG BUDGET, seven-camera shoot of my HBO-style stand-up comedy special ala Bill Maher, Chris Rock, Sarah Silverman, et al and it’s FROM THE RIGHT. and I NEED YOUR HELP.

EVERY SINGLE ONE OF YOU should come out — and bring a friend or three or five — to help me pack the four-hundred seat El Portal Theater for two sepaate shows back-to-back to be edited into one hour-long stand-up special.

This is being produced and directed by LIONEL CHETWYND and,, in its own way, may be one of the most important conservative efforts of recent memory as, since, in the words of Andrew Breitbart, “pollitics is downstream from culture,” this concert video is intended to pierce the stranglehold the left has on political satire and destroy the Leftist created myth that only Liberals are smart, funny and creative or that there’s simply no audience for conservative entertainment.

Again, I NEED YOU — and it’s free!!! Please help me pack the room for both the energy it brings and for the aesthetics of the audience shots. Imagine if the camera turns for reaction shots and there are empty seats. Liberals will have a heyday with that.

For FREE TICKETS, please email me at [email protected]

PLEASE SHARE — BOTH THE INFO AND THE URGENCY — with EVERYONE on your various lists and in your various clubs. Seven-hundred-plus seats is a LOT to fill and I NEED YOUR HELP.

Celebrating Sharia in the Olympics