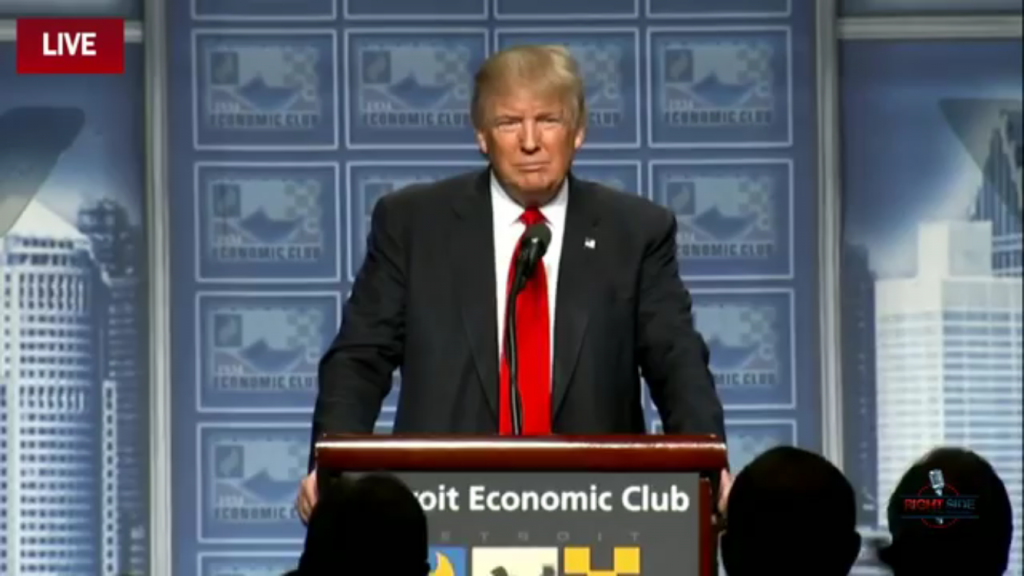 Speaking at the Detroit Economic Club Monday afternoon, Donald Trump laid out an economic plan that he vows will “jumpstart” the U.S. economy to prosperity by reforming tax, trade and regulatory policies all while consistently contrasting his agenda plan of rival Hillary Clinton.

“We now begin a great national conversation about economic renewal for America,” Trump said. “Our opposition, on the other hand, has long ago run out of ideas. All Hillary Clinton has to offer is more of the same: more taxes, more regulations, more bureaucrats, more restrictions on American energy and American production.”

During his 50 minute remarks, Trump sought to cast his rival. Democratic candidate Hillary Clinton as the “candidate of the past,” citing Detroit as an example of what to expect of the devastating economic effects if she were to become president.

“The city of Detroit is the living, breathing example of my opponent’s failed economic agenda,” Trump said. “Every policy that has failed this city, and so many others, is a policy supported by Hillary Clinton.”

Trump added, “[Hillary] is the candidate of the past. Ours is the campaign of the future.”

Offering a detailed policy proposals that is a revised version of his first policy speech given last September, the GOP candidate touted his “American First” economic plan, proposing an “across-the-board” income tax reduction by reducing the current number of brackets from seven to three with tax rates of zero, 12, 25 and 33 percent.

“Tax simplification will be a major feature of the plan,” Trump said. “My plan will reduce the current number of brackets from 7 to 3 and we will work with House Republicans on this plan, using the same brackets they have proposed — 12, 25 and 33 percent. For many American workers, their tax rate will be zero.”

Trump added, “These reforms will offer the biggest tax revolution since the Reagan Tax Reform, which unleashed years of continued economic growth and job creation.”

Offering something new to his economic proposal, Trump called for reducing the cost of child-care by allowing parents to “fully deduct the average cost of childcare spending from their taxes.” This section of his speech, a platform the GOP rarely focuses, comes shortly after his daughter, Ivanka Trump mentioned this plank during her speech at the Republican National Convention last month.

“As part of this new future, we will also be rolling out proposals to increase choice and reduce the cost in childcare, offering much-needed relief to American families,” Trump said, giving a shout out to Ivanka who was in the audience. “I will unveil my plan on this in the coming weeks that I have been working on with my daughter Ivanka, who feels so strongly about this.”

On regulatory reform, Trump attacked the Obama Administration for issuing 400 new major regulations since taking office, costing the American economy $100 million annually. He vowed his overriding goals with regulations is to keep jobs in America by “removing the anchor dragging” America down.

“Upon taking office, I will issue a temporary moratorium on new agency regulations,” Trump said. “I will ask each and every federal agency to prepare a list of all of the regulations they impose on Americans, which are not necessary, do not improve public safety, and which needlessly kill jobs. Those regulations will be eliminated.”

In regards to trade, a centerpiece of his campaign and economic agenda, Trump reiterated his opposition to deal, calling for U.S. to pull out of the Trans Pacific Partnership, renegotiate NAFTA, all while blasting Hillary as a two-faced when it comes to the TPP stance.

“This is a strike at the heart of Michigan, and our nation as a whole,” Trump added, citing statistics from the Bureau of Labor Statistics before NAFTA went into effect of “285,000 auto workers in Michigan,” compared with only 160,000 today. “Hillary Clinton has supported the trade deals stripping this city, and this country, of its jobs and wealth. Detroit is still waiting for Hillary Clinton’s apology. I expect Detroit will get that apology right around the same time Hillary Clinton turns over the 33,000 emails she deleted.”

Sticking and delivering to message, Trump was interrupted over 14 times by protestors who tried to take him off message as a way to create more unwanted distractions for his campaign. The protestors, almost all except one were women, shouted idiotic remarks such as “you’ll have to answer to women” every few minutes during the first half of his speech. The GOP candidate ignored the distractions, staying cool and calm even though he appeared visibly frustrated and thanking the audience for the cheers as Secret Service escorted the protesters out. After the 12th interruption, Trump mocked the protestors with a line that drew the biggest laughter.

“I will say, the Bernie Sanders people had far more energy and spirit,” Trump said.

His speech was a critical moment for his campaign to turn the page and bounce back after a disastrous week of headlines and falling poll numbers. By doing so, Trump focused his line of attacks against Hillary, who now plans to fire back by giving her own economic proposals in Detroit on Thursday. In shifting his focus to policy, Hillary’s campaign is quickly looking to maintain her new poll number momentum as polls show Trump does well with voters on economic issues such as jobs and trade.

In a memo sent out ahead of Trump’s speech, Hillary’s campaign stated his economic plan “involves reckless tax cuts that will trillions to the debt” that will lead the economy into recession.

“The Chamber of Commerce and labor unions, Mitt Romney and Elizabeth Warren, and economists on the left, right and center all agree — Trump’s policies would throw us back into recession,” the memo reads.

Is Hillary Clinton a Compulsive Liar or a Sociopath? (There's Not Much Difference...)