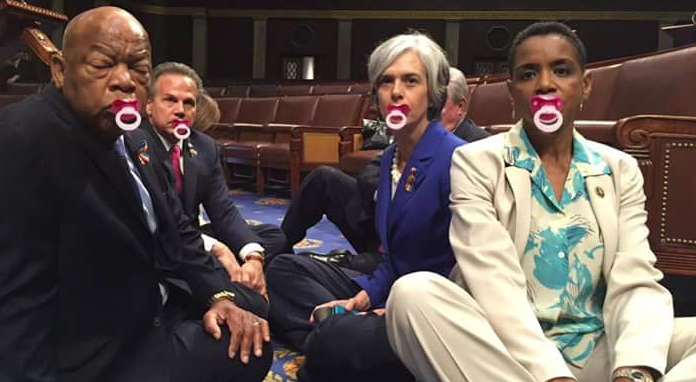 When disgruntled Democrats took the rotunda hostage this summer with their rebellious House sit-in, I fully understood their frustration.  However, their charlatan tone was unacceptable and too hypocritical for words. They were rude while breaking with congressional procedure and protocol with their egotistical attempt at more narrow minded legislation. A Liberal having a full-fledged temper tantrum equal to that of a two and a half year old is never very attractive or productive.   But what really baffles normal people is when a Liberal tries to portray himself as a person of “morality”. Every time they assume the role of the Scruples Police one has to be curious about the litmus test they are using.  The mass shooting by ISIS-inspired Omar Mateen in Orlando, Florida caused this chain reaction on the Democrat side of Congress, led by civil rights activist Representative John Lewis of Georgia. Lewis first approached the subject the morning following the shooting, by writing a letter to Speaker of the House Paul Ryan demanding that the House remain in session to work on more gun control legislation.

By midweek when Rep. Lewis realized the Speaker had no intention of caving to their demand letter but instead was sticking to the Hills’s schedule.  So Lewis initiated the sit-in shortly after with a handful of people that grew to about 40 representatives and a scattering of Senators. By day’s end, this small group of narcissists had morphed into a Mexican showdown between Ryan and the left side of Congress. Lewis had the audacity to defend his behavior by appealing to the “morality of the public”, stating   “We have a mission, a mandate, and a moral obligation to speak up and speak out until the House votes to address gun violence. We have turned deaf ears to the blood of the innocent and the concern of our nation. We will use nonviolence to fight gun violence and inaction.”

How dare the very same legislators that repeatedly vote to keep abortion legal try and reproach Republicans about a self-proclaimed mandate on gun control. The 49 people that lost their lives in the Pulse nightclub were innocent and in the wrong place at the wrong time. But how do these 49 souls overshadow the 54 million babies that have been legally slaughtered in this country? Since when did the value of human life ever concern a Democrat? Well, over 81% of the country disagrees with abortion on demand as it stands now and yet this sounds like a mandate to me.

Lewis wanted to reprimand Republicans for turning a deaf ear to the “blood of the innocent”, but I have a news flash for him: There is no one more innocent than an unborn baby, growing in the womb of his mother. The reality of abortion is that over 3,500+ babies are killed every day across this country with the dirty little secret that less than 1% are killed because of rape or incest. But the Bleeding Heart Club is not concerned with life in the womb, nor the welfare of women on any level, other than controlling them. Democrats have their worn out song and dance about “reproductive rights”, which are a figment of their imagination. Ovaries and fallopian tubes do not have “rights” because they are simply reproductive organs. And yet “reproductive rights” are what Democrats consider moral and ethical? On what planet do these people think they live?

The unfortunate, sobering fact is that even if the new gun restriction measures filed were made into law it would not have prevented the slaughter in Orlando. On the other hand, if abortion were made illegal it would prevent a loss of life in staggering numbers.

My belief is that 3,500 daily dead souls, each sanctioned by our Supreme Court, is the true “blood of the innocent”. So where are all of the loud mouthed Liberals when you need them?  Providing more crocodile tears from people like Representative Nita M. Lowey (D-NY) who said, “I just want to make it very clear that I’d rather my child be inconvenienced than dead.”

Perhaps Rep. Lowey would feel differently if abortions were performed with guns instead of crushing baby’s skulls before suctioning them out of their mother. Sadly, I think not.

The NY Times writes, “Democrats have repeatedly accused Republicans of siding with the National Rifle Association rather than with the victims of gun violence.”  And Democrats are saying the N.R.A. stands for “No Republican Action.” Of course nothing that the Party of Ill Repute has to say weighs on the mind of a Republican.  We know better.

Regarding gun control and the aforementioned sit-in, Nancy Pelosi expressed bewilderment at the Republican position saying, “What could they be thinking? Whatever it is, they don’t want to tell anybody about it. That’s why they left in the dead of night.”  Pelosi should be informed that gun legislation aside, it is the “moral high ground” of Democrats that is the problem.  To filibuster is one thing, and to abstain from voting another, but to blame Republicans for gun violence is absolutely crazy, not to mention counterproductive as they themselves were impeding progress.

With all mass shootings–whether ISIS-inspired or homegrown–there is a human hand pulling those triggers. Their weapons are not firing of their own free will but instead from hatred of the person who has death in the crosshairs of his soul.

Ryan said the gun bills pushed by Democrats, to expand background checks and keep people on the no-fly list from getting guns, would “take away people’s constitutional rights and deprive them of due process.” He noted that the Senate recently rejected similar legislation.

Democrats are misguided about the deep-seated social problems in our own country.  Their intensity of hatred towards guns will not be thwarted by endless legislation that takes away freedom from law abiding citizens and in no way deters criminals at large. Their assessment of Republicans is twisted. Republicans respect life from the womb to the grave, whether a life is snuffed out by the hands of an abortionist or gunned down in a nightclub.  Republicans believe every soul counts and it is not up to any Democrat politician to decide who can be killed and who can live.

We all understand what an ugly subject abortion is and for this reason it is never in the forefront of any platform. Instead it gets swept under the rug each election. The sheer hypocrisy among Democrats in accusing Republicans of behaving immorally and unethically is ridiculous, coming from the people that consistently reject any sort of pro-life bill. Their piety is nauseating.

Regarding the Democrat’s summer sit-in, former President Bill Clinton tweeted, “This is leadership”.  This, coming from the man who repeatedly vetoed to keep legal PBA, the procedure where a doctor induces labor in a healthy woman in her third trimester.  So while Democrats subjugated the decorum of the Nation’s Capital, they also secured their position as The Party of Unconscionable Behavior. Lest they forget Democrats are the party that adores science–despite the fact that science says life begins at conception.  The irony in all of this is how they continue to fight gun control when they show no respect for life.

Near the end of the Democrat sit-in, those holier than thou liberals were shouting “SHAME” to Speaker of the House Ryan.  I remember thinking, “Shame on them.”  A pro-abortion voting Democrat will never be in the position to admonish a pro-life Republican about guns and the sanctity of life no matter how big a soap box they stand on.