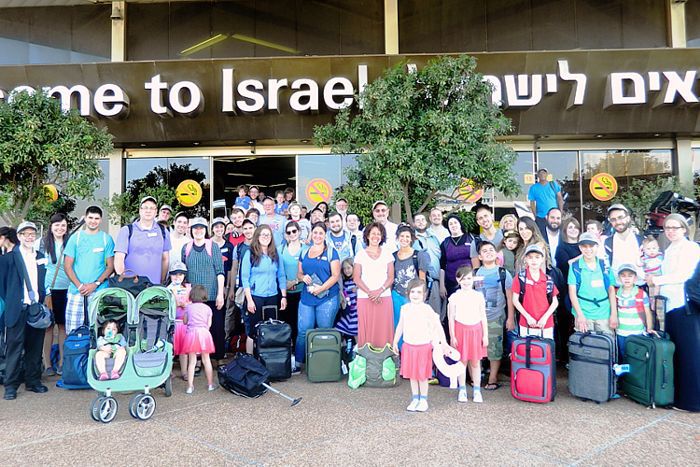 In the past year over 4,ooo Jews from the United States and Canada have immigrated to Israel. Out of the only small number of Americans the majority of them have no idea what life is like in the Jewish homeland except from media or movies.   Here is what I can tell you from my own eyes of the country that God gave us.

Israel is the a melting pot of different cultures, races, religions of the Middle East. The only Democracy in the Middle East where people have the freedom how they feel is the right way to live.   Even with these freedoms it is still a unique Jewish state that follows laws that goes back to the laws our patriarchs follow. In the normal life of an Israeli it is a 6 day work week where Sunday is the new Monday with only Saturday (Shabbat) is off. Adults go to work then kids go to school. In Israel the only place you don’t have to explain to a teacher or boss why you are taking time off Yom Kippur or Chanukah.

Israel is a place where any Jew can observe all the way from Orthodox Judaism to Conservative and Reform and even be atheist. Even in Orthodox there are different movements Chabad, Cheredi Modern Orthodox etch. You have Ashkenazic and Sephardic Jews living as one nation in Israel. As great as it can be there are challenges especially the first few years of living in the Holy Land.

Some challenges one might face is finding the right city or Kibbutz for you and your family.   Each town has its own personality from Tel Aviv to Jerusalem. Others can be how much Hebrew you know. Luckily the government is aware of the different up bringing that they offer Ulpan classes to bring people up to speed. This is extremely important because the level of Hebrew you are at can determine the job you can get.

Government offices like the Ministry of Education, Social services, medical care have lots of red tape of beauracracy that has to be cut and many of it does follow socialistic/communistic way of life.   Even through you have to battle for freedom in the education system there are many different options which are unique in Israel then they would be in the States there are different level of Jewish religious schools, state ran schools, homeschooling and even unschooling which is common in the Ultra-Orthodox communities.

When an Israeli becomes the age of 18 they have the choice of joining the Israeli Army or the civilian National Service. It is a very unique Army because it has soldiers from all different parts of the world defending Israel, unlike the American Army that goes out to other countries fighting terrorism. IDF Israel Defense Force fights terrorism here at home.

In speaking of terrorism everyone knows Israel the only Jewish country in the entire world deals with terrorism in almost a daily basis which sadly it does become a normal part of life. In fact this Sunday and this can happen at any time, any day of the month. You can go through your normal routine and all of a sudden rocket attack. Sirens going off, and depending where you live you have few seconds in running to the safe room. Then after a certain amount of time everyone goes back to their normal routine, same with other acts of terrorism Israelis face. My family our first year we lived in Ashquelon a place few miles from Gaza and we spent our summer in the safe room during the war with Hamas in 2014.

Even during the times of terror our people come together as one nation and one family and we mourn together when we lose one of our people. After one terror attack a newlywed bride loss her brother and father. She still proceeded to have the wedding because our people believe in life. She invited the entire nation to her wedding and reception and even the Prime Minister’s wife Sarah Netanyahu showed up to support. Even with days with no terror attacks families will invite strangers to a Bar/Bat Mitzvah, wedding, baby naming ceremony.   With all the differences we are still one nation, one people.

Emery McClendon: The "Sound of Blackness" or a False Narrative?