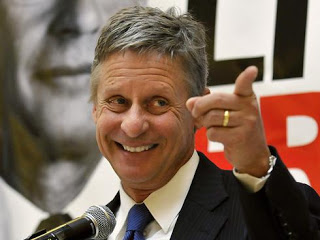 This is the summer of Gary Johnson. The former New Mexico governor who has been steadily drifting left over his career is now doing his best to make Hillary Clinton into President Hillary Clinton.

Back in 1999, Johnson rejected overtures from the Libertarian Party for a presidential run. “I’m a Republican, and I’m not going to run for President.’”

Both parts of that statement proved to be lies.

Libertarian and non-libertarian supporters see a principled politician in Gary Johnson. But Johnson has always been a political chameleon, shifting his colors to win elections.

Whatever the number is though, it’s probably true because Gary Johnson excels at reinventing the percentages of his principles to fit the political needs of the moment.

Johnson is best known for his support for pot legalization, but few people remember that it came after he won a second term by vowing to be tougher on crime than anyone else. The libertarian hero was originally in favor trying 13-year olds as adults. But the modern Gary Johnson is against three strikes laws and backs Black Lives Matter. It’s a long way from running as the guy who would try 13-year olds as adults and make sure that every convict would serve “every lousy second” of his sentence to endorsing a racist hate group that protests “mass incarceration” and “police genocide.”

But Gary Johnson has always been evolving with an eye on the next phase of his career. His “evolution” was most obvious during his lame duck second term. It really picked up as he began working on a national career. His pathetic attempt to dress up as Bernie Sanders is the final phase of that career.

Johnson explains his leftward tilt by claiming stupidity. His eyes are now “open” to racial discrimination. As governor of New Mexico, he was “naïve” and didn’t think the government made mistakes with the death penalty. Johnson is always discovering new things, like discrimination or mistaken convictions, with childlike enthusiasm to explain why he abandoned his prior politics.

But the truth is that Gary Johnson panders. He has always pandered. He’s pandered on abortion, on crime and on education spending.

The libertarian hero touts a track record of cutting spending. But Johnson didn’t become popular by cutting spending, but by making a show of appearing to. Under him, state budgets rose from $4.3 billion to $7.2 billion. New Mexico went from a debt of $1.8 billion to a debt of $4.6 billion.

Those aren’t quite Obama numbers, but they certainly aren’t libertarian numbers.

While Gary Johnson made a show of vetoing bills, the actual money went on flowing. This is a familiar tactic practiced by certain Republicans who claim to be fiscal conservatives, throwing loud tantrums for public consumption while the money train keeps on running. And that’s what Johnson was doing.

Johnson’s pandering is often erratic. He was for NAFTA and then was briefly against it. He signaled opposition to TPP before coming out for it. After rejecting conservative ideas, Johnson is still stuck with the contradictions between libertarianism and the Bernie Sanders supporters whom he is trying to court.

And he’s discovering that he can’t truly court both at the same time. Johnson is pandering to too many different demographics. And when in doubt he panders to the left rather than to libertarians.

It’s why Gary Johnson actually went to the left of Obama on gay marriage. Johnson complained that Obama wasn’t doing enough to force all states to assent to gay marriage.

“Instead of insisting on equality as a US Constitutional guarantee, the President has thrown this question back to the states. When the smoke clears, Gay Americans will realize the President’s words have gained them nothing today and that millions of Americans in most states will continue to be denied true marriage equality. I guess the President is still more worried about losing Ohio, Colorado, North Carolina and Virginia than he is in doing the right thing,” Johnson bleated.

It said something about Gary Johnson’s libertarian credentials that he felt that Obama wasn’t violating the rights of states, not to mention freedom of religion, hard enough.

Asked about the difference between gay marriage and polygamy, Gary Johnson could not give a coherent answer. But that’s because Johnson has no principles, only populist gimmicks.

He isn’t a libertarian. He has no notion of ideas. He just happens to excel at getting attention with publicity stunts.

Meanwhile William Weld, Johnson’s VP, seemed on board mainly to make his number one appear libertarian by comparison. Weld believes that, “The problem with handguns is probably even worse than the problem of the AR-15”.

No libertarian is the correct answer. Weld is neither a Republican nor a libertarian. He’s a liberal who isn’t left-wing enough for actual liberals. The same is true of Gary Johnson.

Gary Johnson isn’t a third party alternative. Instead he’s latching on to dissatisfaction in both parties while clumsily trying to pretend that he has some sort of consistent principles.

And those kinds of tactics are not new.

There are independent politicians who genuinely offer an alternative viewpoint. There are others who are just opportunists. One of the better recent examples is Lincoln Chafee.

What Gary Johnson wants most of all is to seem cool. It’s his Achilles heel. It’s why he backed legal pot, gay marriage and now Black Lives Matter.

Even on the best of days no one would mistake him for an intellectual. But on most days, he wants the popularity that came easily to Bernie Sanders once he was embraced by the left. And so Johnson emphasizes how much he in common he has with Sanders hoping that the mindless flocks of Bernie supporters will stream to his campaign.