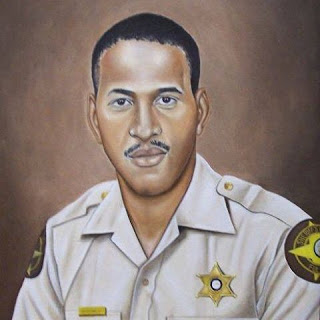 In the spring of 2000, Fulton County Sheriff’s Deputy Ricky Kinchen and fellow Deputy Aldranon English went to serve a warrant in downtown Atlanta. Both Kinchen and English were African-American.

Kinchen had graduated Morris Brown College, a historically black college that had been founded in 1881 and named after one of the founders of the African Methodist Episcopal Church. He had spent almost a decade serving the public in his current job and was married to Sherese Kinchen and had two children.

At his killer’s trial, Sherese testified that, “When Ricky was killed, I lost a part of myself. Ricky was not only my husband, he was my friend for 18 years. He was my confidant and my rock, and now he’s gone.”

Ricky Kinchen and Aldranon English were approaching a store owned by Jamil Abdullah Al-Amin, formerly known as H Rap Brown. Brown had converted to Islam after a term in prison and a shootout with police officers in the seventies. He had shot to fame as the very violent chairman of the Student Nonviolent Coordinating Committee. Typical lines included, “It’s time for Cambridge to explode, baby. Black folks built America, and if America don’t come around, we’re going to burn America down.”

When Kinchen and English were approaching him, Brown was known as Imam Al-Amin, a Muslim religious leader who headed the Community Mosque and was a key figure in the National Ummah.

He was no less of a terrorist for it.

Al-Amin opened fire with a rifle on the two African-American law enforcement officers. Deputy Aldranon English was wounded and he stumbled to a nearby field to save his life. Deputy Kinchen was shot and fell. Al-Amin ran out of bullets, took a handgun from his black Mercedes, pointed it at the fallen African-American officer as he lay dying and shot him between the legs three times.

Deputy English survived the attack. Later he would break down in tears on the stand as he described the murder of his partner. Defense lawyers for Al-Amin worked to rig the jury, removing anyone who disliked the violent racist Black Panthers hate group that Al-Amin, in his former life as H Rap Brown, had been associated with. They ended up with a jury of six black men, three black women, two white women and one Hispanic woman.

The jury, including the six black men and three black women, found Al-Amin guilty as hell of the murder of an African-American police officer. Al-Amin and his two wives, the younger of whom was a teenager when they were married, who lived in houses three miles apart from each other, frowned as the verdict was read. Al-Amin was sentenced to life in prison. There would be no parole.

Outside the church where Deputy Ricky Kinchen was buried, the line of police cruisers stretched for miles as officers paid tribute to a fallen brother. His casket, covered in the flag, was carried out to honor and glory. If there had been any justice, Deputy Kinchen would be remembered as a hero.

Instead Al-Amin has become a martyr among black nationalists, including among the latest incarnation of the racist movement, Black Lives Matter. The recently released Black Lives Matter policy agenda calls for freeing a number of cop killers, including the murderer of Deputy Ricky Kinchen. Al-Amin is one of Black Lives Matter’s heroes. It doesn’t matter at all that he took a black life.

Black lives don’t matter to Black Lives Matter. Black Nationalist terrorism does. The racist hate group describes the murderers of black and white police officers as “political prisoners”. It demands the removal of Assata Shakur, a particular icon of Black Lives Matter, from “international terrorist lists” and an end to the bounty for the capture of the fugitive who helped murder New Jersey State Trooper Werner Foerster.

Hilton had been busted for the sexual abuse of his girlfriend’s 12-year-old daughter. The Black Nationalist icon had allegedly molested the little girl for seven years. Eager to get out of trouble, he began talking to the police and it didn’t take them long to connect him to the murder of Officer James Green who had been killed by Hilton on orders from a superior in the Black Liberation Army.

If the life of Officer James Green doesn’t matter to Black Lives Matter, perhaps the life of that little girl should. But it clearly doesn’t.

Finally Black Lives Matter’s policy agenda speaks out for the murderers of Sergeant John V. Young. Young was killed with a shotgun blast inside a police station by Black Nationalist terrorists who were also involved in the attempted murders of seven police officers. One of their vilest crimes was the bombing of St. Brendan’s Church where the funeral of Patrolman Harold Hamilton had been taking place.

Hamilton’s three little children were nearby when the bomb, filled with nails and screws, went off.

If all had gone off according to plan, the bomb would have exploded as the casket with the fallen officer was being carried past it. But the timing was off and no one was hurt. But not for lack of trying.

“To the violent and the criminal our efforts to halt this kind of lawlessness will be condemned as acts of oppression,” Governor Ronald Reagan declared. “Let them call it what they will. I’m unable to hear the whimper of the criminal above the cry of the victim and the weeping of his widow and children.”

Black Lives Matter still calls it oppression. It demands that we hear the whimper of the cop killer.

It is no coincidence that the cop killers that Black Lives Matter is agitating for were associated with the Black Liberation Army. Or that the hate group traffics in rhetoric about police genocide that is ominously similar to those of the racist killers and terrorists that it defends. Black Lives Matter does not care about the lives of black people or of anyone else. It is a terrorist organization that seeks power through terror. It plays the victim as cover for its abuses.