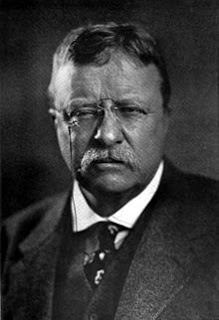 A hundred years ago, Muslims were furious over an immigration bill whose origins lay with advocacy by a headstrong and loudmouthed Republican in the White House.

The anti-immigration bill offended the Ottoman Empire, the rotting Caliphate of Islam soon to be defeated at the hands of America and the West, by banning the entry of “all polygamists, or persons who admit their belief in the practice of polygamy.”

This, as was pointed out at the time, would prohibit the entry of the “entire Mohammedan world” into the United States.

And indeed it would.

The battle had begun earlier when President Theodore Roosevelt had declared in his State of the Union address back in 1906 that Congress needed to have the power to “deal radically and efficiently with polygamy.” The Immigration Act of 1907, signed into law by President Theodore Roosevelt, had banned “polygamists, or persons who admit their belief in the practice of polygamy.”

It was the last part that was most significant because it made clear what had only been implied.

The Immigration Act of 1891 had merely banned polygamists. The newest law banned anyone who believed in the practice of polygamy. That group included every faithful believing Muslim.

The Ottoman Empire’s representatives argued that their immigrants believed in the practice of polygamy, but wouldn’t actually take more than one wife. This argument echoes the current contention that Muslim immigrants may believe in a Jihad against non-Muslims without actually engaging in terrorism. That type of argument proved far less convincing to Americans than it does today.

These amazing facts, uncovered by @rushetteny reveal part of the long controversial history of battles over Islamic migration into America.

Muslim immigration was still slight at the time and bans on polygamy had not been created to deliberately target them, but the Muslim practice of an act repulsive to most Americans even back then pitted their cries of discrimination and victimhood against the values of the nation. The Immigration Act of 1907 had been meant to select only those immigrants who would make good Americans.

And Muslims would not.

In his 1905 State of the Union address, President Theodore Roosevelt had spoken of the need “to keep out all immigrants who will not make good American citizens.”

Unlike modern presidents, Roosevelt did not view Islam as a force for good. Instead he had described Muslims as “enemies of civilization”, writing that, “The civilization of Europe, America and Australia exists today at all only because of the victories of civilized man over the enemies of civilization”, praising Charles Martel and John Sobieski for throwing back the “Moslem conquerors” whose depredations had caused Christianity to have “practically vanished from the two continents.”

While today even mentioning “Radical Islam” occasions hysterical protests from the media, Theodore Roosevelt spoke and wrote casually of “the murderous outbreak of Moslem brutality” and, with a great deal of foresight offered a description of reform movements in Egypt that could have been just as well applied to the Arab Spring, describing the “mass of practically unchained bigoted Moslems to whom the movement meant driving out the foreigner, plundering and slaying the local Christian.”

In sharp contrast to Obama’s infamous Cairo speech, Roosevelt’s own speech in Cairo had denounced the murder of a Coptic Christian political leader by a Muslim and warned against such violent bigotry.

Muslims had protested outside his hotel, but Teddy hadn’t cared.

The effective implementation of the latest incarnation of the ban however had to wait a year for Roosevelt’s successor, President Taft. Early in his first term, the Ottoman Empire was already protesting because its Muslims had been banned from the country. One account claimed that 200 Muslims had been denied entry into the United States.

Despite these protests, Muslims continued to face deportations over polygamy charges even under President Woodrow Wilson. And polygamy, though not belief in it, remains a basis for deportation.

Though the law today is seldom enforced.

American concerns about the intersection of Muslim immigration and polygamy had predated Roosevelt, Taft and Wilson. The issue dated back even to the previous century. An 1897 edition of the Los Angeles Herald had wondered if Muslim polygamy existed in Los Angeles. “Certainly There is No Lack of Mohammedans Whose Religion Gives the Institution Its Full Sanction,” the paper had observed.

It noted that, “immigration officials are seriously considering whether believers in polygamy are legally admissible” and cited the cases of a number of Muslims where this very same issue had come up.

A New York Times story from 1897 records that, “the first-polygamists excluded under the existing immigration laws were six Mohammedans arrived on the steamship California.”

To their misfortune, the Mohammedans encountered not President Obama, but President Herman Stump of the immigration board of inquiry. Stump, an eccentric irascible figure, had known Lincoln assassin John Wilkes Booth and had been a wanted Confederate sympathizer during the Civil War.

In the twilight of his term, Stump had little patience and tolerance for either Islam or polygamy.

The Times story relates the laconic exchange between Stump and the Muslim migrants.

“You believe in the Koran?” asked President Stump.

“The Koran teaches polygamy?” continued the Inspector through an interpreter.

“Blessed be Allah, it does!”

“Then you believe in polygamy?” asked Captain George Ellis.

“We do. We do! Blessed be Allah, we do,” chorused the Arabs, salaaming toward the setting sun.

“That settles it,” said President Stump. “You won’t do.”

None of the laws in question permanently settled the issue. The rise of Islamist infiltration brought with it a cleverer Taquiya. The charade that Muslims could believe one thing and do another was dishonest on the one hand and condescending on the other. It was a willful deception in which Muslims pretended that they were not serious about their religion and Americans believed them because the beliefs at stake appeared so absurd and uncivilized that they thought that no one could truly believe them.

Theodore Roosevelt knew better. But by then he was no longer in office.

Unlike today’s talk of a ban on Muslim migration from terror states, laws were not being made to target Muslims. Yet Muslims were the likeliest group of foreigners to be affected by them. Even a hundred years ago, Islam was proving to be fundamentally in conflict with American values. Then, as now, there were two options. The first was to pretend that there was no conflict. The second was to avert it with a ban.

A century ago and more, the nation had leaders who were not willing to dwell in the twilight of illusions, but who grappled with problems when they saw them. They saw civilization as fragile and vulnerable. They understood that the failure to address a conflict would mean a loss to the “enemies of civilization”.

Debates over polygamy may seem quaint today, but yet the subject was a revealing one. Islamic polygamy was one example of the slavery so ubiquitous in Islam. The enslavement of people is at the heart of Islam. As we have seen with ISIS, Islamic violence is driven by the base need to enslave and oppress. Polygamy, like honor killings and FGM, is an expression of that fundamental impulse within the private social context of the home, but as Theodore Roosevelt and others understood, it would not stay there. If we understand that, then we can understand why these debates were not quaint at all.

American leaders of a century past could not reconcile themselves to Islamic polygamy. Yet our modern leaders have reconciled themselves to the Islamic mass murder of Americans.

Thus it always is. When you close your eyes to one evil, you come to accept them all.